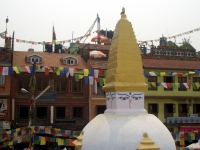 It has become increasingly common to discuss the cultural aspects of conflict and conflict resolution. Where does conflict come from? Some scholars take a social constructionist view of conflict, rooted in social science literature, which also provides the philosophical underpinnings of Human Science as taught at Saybrook. The construction of meaning is a social act, and meaning is a negotiated process.

Both conflict and meaning have the same origin, the inter-subjective/interactive relationship between self and society. Therefore, meaning and conflict are fundamentally linked. Meaning is created through shared and accumulated knowledge. Conflict as a socially-constructed occurrence means that people are active participants. Conflict does not happen to us, but instead emerges through interactive processes. We are the authors and creators. Conflict is dynamic and participatory, not static or passive.

Conflict itself can never be fully eradicated; it is a natural part of human interaction. But conflict is not necessarily violent. Conflict is part of life; integral to the creation of meaning. Conflict also provides impetus for change. Seen this way, eliminating conflict is not only impossible, but undesirable, since conflict is necessary for change to occur.

What is meant by the term “culture” and why is it relevant to an exploration of conflict? Is there something specifically “cultural” about conflict or the way it is understood? The term culture typically signifies that which gives actions their meaning.

If conflict is inevitable but violent conflict is a choice, there must be commonplace ways of diffusing conflict so that violence is not more pervasive in society. The way that this diffusion is done differs according to what is deemed culturally appropriate. These “conflict experiences” allow people to express their feelings and emotions in ways that are socially sanctioned. If this did not occur, conflict would either remain unresolved, causing further agitation, or it would be expressed through unacceptable channels, likely to be characterized by an increase in violent behavior. Culture, or rather a cultural consciousness, is expressed by members of a particular group as they develop a sense of what actions are appropriate based on interaction with others in a similar environment. It is a reciprocal, mutually-constructed relationship.

Children learn to construct their own set of cultural values and meanings. Since we do not possess cultural literacy at birth, we inherently favor the culture we are socialized in because it seems more normal than other systems we later encounter. Thus, the conditions for violent conflict arise when two or more parties with different constructions of a common situation come into conflict and each side implicitly privileges their own over those of others. Therefore, we must develop mechanisms for dealing with conflict that are not inherently part of our own cultural assumptions or biases.

The relationship between culture and conflict is deep and complex. It is often pointed out that the perpetrators of violence are really just ‘regular people’. But focusing on the human capacity for violence gives increased legitimacy to the idea that violence is normal and expected. For violence to be avoided, collaborative and creative solutions are needed that acknowledge complexity. Replacing the doom-and-gloom belief that violence is inevitable is a hopeful embrace of the individual and collective potential for a transcendent and sustainable peace.