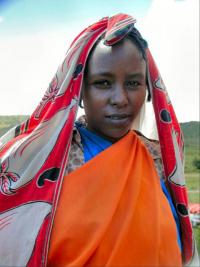 In this post, I will continue my story about a 25-year-old Kenyan woman who I have named “Mrembo” for the sake of this writing. Mrembo managed to escape the deeply violating, humiliating, dehumanizing, cruel, degrading and traumatic experiences at the hands of her former husband of seven years—a man whom she had married after he sexually assaulted her when she was 14.

My previous post closed with Mrembo having left her five children in the care of her maternal grandmother in the countryside so that she could travel to Nairobi, the capital city of Kenya, in search of employment that would enable her to take care of herself and her children.

It has been two years since Mrembo first arrived in Nairobi. She lives with her uncle—her mother’s brother—in an area commonly referred to as one of Nairobi’s slums. Mrembo’s uncle works as a security guard, or a “watchman,” and lives in a one room house with his wife and their four young children. His one-room house is a multi-purpose living space that serves as the family kitchen, bedroom, entertaining area, and reading area for the children.

Her uncle’s rented house is the space Mrembo occupies after her day-long job as a domestic worker, or house maid, which is commonly known as a “mbochi” in Kenya. While I am not sure about the origin of the word “mbochi,” the term is somewhat derogatory and is commonly used to refer to young women (and in some instances young girls) that work in homes taking care of children, cooking, cleaning, and doing all kinds of household chores. The term “mbochi” as used in this writing does not in any way refer to the Mbochi or Mbosi people, an ethnic group in Central Africa that mainly inhabits the northern region of the Republic of the Congo.

Mrembo said she feels very fortunate because her current employer is very kind to her. She recalled a former employer who consistently overworked her and made many physical demands that left Mrembo feeling exhausted by the end of the day. She recalled being called all kinds of degrading names, being physically assaulted by her employer as well as sometimes going without food or being given very little food. She also remembered being denied the opportunity to take time off work at least once or twice a week to rest and do other things that she would like to do.

Mrembo also shared stories of other young women she knows who are also domestic workers. These women are physically and sexually assaulted by the men in their employers’ households and then vilified or physically assaulted by the women in these households who blame them for tempting the men into these sexual encounters. She explained that some of these young women put up with the abuse for so long because they desperately need the money.

On the average, Mrembo said, she earns the equivalence of 50 to 80 dollars a month. This being all the money she has to meet all of her needs and her childrens’ need. Mrembo said she also contributes taking care of her aging grandmother who looks after her children.

Mrembo told me that she aspires to go back to school someday so that she can acquire knowledge and skills that would give her the ability to earn more money so that she might more adequately meet her needs and responsibilities. However, she said that this will be very difficult to accomplish because she typically works all day almost all week long so as to earn the full amount of her current monthly salary. She said she is not aware of any opportunities that would allow her to pursue secondary education on the weekends when she has time off from work. Additionally, she has yet to resolve the problem of not having her national ID card and primary school national examination certificate—critical documents that her former husband confiscated from her when she refused to go back to him after he had, on several occasions, violated her rights and dignity.

When I inquired about the safety of her children, she explained that her former husband is not interested in their children and is only interested in “getting back at her” for leaving him and refusing to go back. With tears in her eyes, Mrembo explained that she would love to live with her children, but the circumstances do not allow this because she cannot afford to find a place for all of them to live together as a family in the city. She feels that despite some of the challenges of the type of work she does, she has to live in Nairobi to feel safe as well as have the ability to make the kind of money she makes to “put food on the table for her children.”

Mrembo said that, despite her efforts to inform the local authorities of her security or safety concerns, security officials have failed to address her concerns and say that her former husband is “mtu mkubwa” and has relatives that are “watu wakubwa.” In other words, her husband and his family are influential, important, or rich people who, because of their status, should not or cannot be held accountable for their actions.

As I reflect upon Mrembo’s story, I cannot help but feel that she has been inordinately let down since her childhood—not only by her former husband who married Mrembo after sexually assaulting her at age 14, but also on a more systemic level. The violence and indignities Mrembo experienced as a child and continues to experience in her adult life are reflective of a social system that, in my view, well aligns with what Riane Eisler refers to as a “system of domination.” In her 2007 book, The Real Wealth of Nations, Eisler defined “systems of domination” as systems that have “authoritarian and inequitable social and economic structures, a high degree of abuse and violence, subordination of women and ‘femininity’ to men and ‘masculinity’ and beliefs and stories that justify and idealize domination and violence.”

I am not saying that Mrembo’s story is every Kenyan or African woman’s story, but it is a story common enough that we cannot ignore or wish away. Mrembo’s story categorically reflects an interwoven prevalent “system of domination” on several levels both in the private and public sphere.

My thoughts and reflections on Mrembo’s story will be continued in a future post.