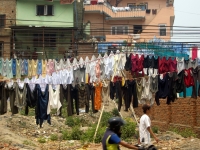 Saybrook faculty and students involved with the Psychologists for Social Responsibility (PsySR) support the organization’s dedication to social transformation. A new statement was released April 25, 2012: The PsySR Statement on Budget Priorities, Poverty, and Inequality.

It is commonplace during election years for politicians to propose budgets that adversely affect the lives of millions of low-income Americans. This year, however, some political leaders in the United States are promoting even more draconian cuts than usual to essential social welfare programs. Compounding the hardship, in response to the most recent recession states throughout the country have already slashed funding needed to protect the poor and the most vulnerable among us.

Psychologists for Social Responsibility (PsySR) stands against these misguided priorities and the lack of flexible and creative thinking that encourages such proposals. We call upon elected officials and the public at large to consider the implications of poverty’s detrimental effects on human development and well-being more carefully and objectively – not just for those without adequate income for basic resources but for our nation as a whole. Consigning millions of children and adults to such daily struggles betrays the values of egalitarianism, justice, and community that our country has long embraced. It may cost us a little more in the short-term if we resist the choice of political expediency and oppose budget cuts that target those least able to bear them. But in the long term, this choice will provide us all, rich and poor alike, with far greater benefits in terms of building both productivity and community in the years ahead.

Many blame the poor for their poverty, but the scientific evidence strongly suggests otherwise. The circumstances of those who are poor are not explained by blanket assumptions about individual character flaws. Multiple studies show that anyone with insufficient access to basic resources for healthy development is far more susceptible to the same bleak outcomes. More than 46 million people live in poverty in the United States today – largely comprised of 20 million whites, 13 million Latinos, and 11 million African Americans – while just as many live only marginally above the poverty line and face similar life-damaging stressors as a result. These numbers include millions of formerly middle-class Americans who have been victims of the economic recession or health catastrophes. All told, approximately one out of three Americans faces the severe threats that poverty poses. Each of these individuals is at increased risk of the behavioral and psychological problems that arise from living in the chaotic, stress-laden, and often depressing conditions of inadequate income for essentials such as food, clothing, shelter, and access to decent education, health care, and work.

Of particular concern, virtually all data across a wide variety of scientific disciplines indicate that poverty is the single greatest threat to the well-being of children, among whom it is tragically prevalent and often self-perpetuating. For poor children, there is a greater likelihood that their early environment will be characterized by inadequate medical care, dangerous air and water quality, neighborhood crime, and deficient schools – all of which pose serious obstacles for developing into adults prepared to succeed in their work and relationships. The most recent research is further cause for concern. It suggests a troubling link between living in poverty and the way a young child’s brain develops and functions. Conditions such as low birth weight and malnutrition, which may cause permanent cognitive impairments, can be largely prevented through greater national investment in reducing poverty.

Beyond the consideration of individual circumstances, poverty and the current extremes of inequality between “haves” and “have nots” also produce adverse conditions at the societal level. Examples include diminished physical and mental health, reduced community cohesion and trust, higher incarceration rates (more than seven million Americans are now in prison or on probation), and worsening environmental problems. These effects also take an enormous economic toll, costing the U.S. tens of billions of dollars annually.

At the same time, economists, sociologists, and other researchers have found that our socioeconomic systems – including the structures that our governments, corporations, and communities have created – play a large role in the existence and maintenance of such poverty and inequality. One structural solution that has been espoused to reduce poverty in America focuses primarily on spurring economic growth. However, this approach predominantly benefits those at the top of the economic ladder. This approach therefore tends to engender even greater inequities, while further depleting and damaging our environmental resources to meet growth’s demands. That environmental harm, in turn, spurs even more conflicts over increasingly scarce natural resources. In short, how we design our economies, our governance, our educational systems, and the use and distribution of our resources are choices we must make carefully as a society. Those choices affect the well-being of everyone and the future of the planet that sustains human life.

Officials who hold the power and control the purse strings do have structural alternatives other than cutting programs for tens of millions of people and worsening the lives of those who already lack adequate resources. As a nation we spend hundreds of billions of dollars annually on military expenditures – more than the rest of the world combined. By some estimates these expenditures represent more than half of our total national budget when all associated costs are included. We have corporations that make tens of billions of dollars in annual profits selling oil, food, and financial derivatives, while millions of Americans can’t afford to heat their homes, eat nutritious meals, or save for their futures. We have the world’s most expensive health care system, but the health outcomes it produces are far worse than those of many other countries and tens of millions of our citizens are excluded from even accessing this system. And in every state, millions of dollars go to legislators’ pet projects – projects of dubious benefit to most citizens.

Abandoning the needs of people with insufficient access to nutritious food, adequate shelter and education, decent-paying work, and other essentials for human potential is unconscionably immoral in the richest nation in the world. It makes us complicit in predisposing millions of children to face enormous barriers in their lives as they grow older and attempt to become an integral part of the socioeconomic potential of their communities, the communities in which we all live. This is true despite our nation’s best efforts to ignore or deny the poverty and inequality in our midst.

As a society, we have the means to distribute our resources more fairly to prevent the harm that poverty and inequality engender for all of humanity. We actually can structure our society to be more just in ways that produce happier, healthier, and more able citizens who, by their very inclusion and engagement, improve the quality of life for all of us. We therefore cannot accept the status quo thinking and politicking that continue to thwart the potential of millions of Americans (and billions more around the world) while a mere few use extraordinary power and wealth to pursue their own interests. We can – and we must – choose a different path. Now is the time to challenge our elected officials to reject harmful austerity measures and to embrace budget priorities that reflect shared values of empathy and responsibility for our collective welfare.

Psychologists for Social Responsibility seeks to bring greater psychological knowledge and public awareness to the critical issues highlighted in this overview. For more information, please visit the webpage of PsySR’s Poverty and Inequality Project at www.psysr.org/poverty-inequality. We also welcome inquiries via email at [email protected].