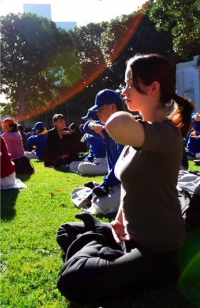 Life. Running here and there. Pre-occupied with this and that. Swept away by one thought or another. We barely have time enough to notice time passing, never mind the preposterous proposition, dare I say, to notice not just our thoughts, but the space around them: a momentary peripheral reverberation, an infinitesimal synaptic break between cognitions, the very slightest of pauses, a hiccup in the assembly line of thought production, when thought-after-thought-after-thought finally cease cascading like dominoes, responsible for the myopic blur that so often stands against our yearning for greater sanity. It’s too bad, really, because in-between is where the magic lies.

In order to contemplate notions of big “E” Enlightenment, or more aptly applied perhaps, in striving for the dynamical capacity for enlightened living, self-actualizing, or moving into a more attuned intrapersonal alignment, Welwood (2000) stresses the critical importance of exploring one’s whole cognitive gestalt, and all the parts that make up its sum:

Our addiction to the grasping tendency of mind causes us to overlook the spaces around thoughts, the felt penumbra that gives our experience its subtle beauty and meaning. Neglecting these fluid spaces within the mindstream contributes to a general tendency to overidentify with the contents of our mind, and to assume that we are the originator and custodian of them. The troublesome equation “I = my thoughts about reality” creates a narrowed sense of self, along with an anxiety about our thoughts as territory we have to defend. (p. 53)

Meditation practice is perfectly suited to train the mind to see that there is no territory to defend after all, and our true nature, like strata, is far deeper than we know. While sitting on the cushion, those who practice meditation are able to slow down the mental processes of their minds as a pre-Olympic trial in preparation for the real event: slowing down the mind during life off the cushion, or, in other words, in the existential reality of every day. It is too much to expect to learn such difficult lessons of self-control, skillful means, and self-mastery while cycling through the ups and downs of what often feels like a rat race. Because of the chaotic environment inherent in our obligatory life marathon, it becomes essential to sit, with great discipline, in one place, remaining quiet and still for good stretches of time, to train the mind to be able to be in the here-and-now of the present moment, and not end up like a leaf caught in the wind, floating wherever the fickle mindstream might take it.

Mindful awareness meditation focuses on development of an attitude of calm abiding, and then, in the space of that clearing, the cultivation of insight (shamatha-vipassana), helping to clean out long-collected mental cobwebs and outdated emotional stockpiles, revealing to the meditator a natural luminosity of mind that would have been otherwise overlooked, or missed in plain sight in the speediness of the “natural attitude” of ordinary thinking rather than “open viewings, of returning to things and being with them” (Moustakas, 1994, p. 58). In the “Memorial Address,” philosopher Martin Heidegger suggests a certain type of Being-with when he describes the phenomena of Andenken, or “thinking toward” (Stambaugh, 1990, p. 90) as “a kind of waiting, not a passive waiting, but a very attentive, intense one” (p. 87). Stambaugh says Inständigkeit, or a posture of “indwelling,” underwrites this quality of attending to:

Inständigkeit or perdurance is a kind of intensely perceptive sticking something through, sticking it out, perhaps something akin to what we do when we try to recall something we’ve forgotten. It reminds me of what Buddhist thinker Dogen called “sustained exertion.” (p. 87)

With sustained exertion and indwelling with the whole of the experience (thoughts as well as the spaces around them), we can see “what it is that Heidegger wants us to let go of” to “lead us back to the direction of Being” (p. 87), emphasizing that man’s “special nature” is that he or she is, essentially, a “meditative being” (Heidegger, 1966, p. 56).

Yet releasement toward things and openness to the mystery never happen of themselves. They do not befall us accidentally. Both flourish only through persistent, courageous thinking. (p. 56)

In the absence of such discipline and intentionality, such courage to be, we often find ourselves lost in mental and physical diversions and interpersonal flare-ups that amount to nothing more, when seen straight through, than hair-trigger responses to stress. Sadly, we are blind to all that we do to ourselves, and each other, because we do not take the time to sit still and examine what the heck is going on in what Buddhist psychology smilingly calls our “monkey mind.” How can we once and for all tame that jumpy monkey?

As meditators meditate, they start to see in textural and structural ways their unique Being-in-the-World, as well as their more universal aspects, in, if not slow motion, at least, slower motion than usual. With a concerted practice, the temporal awareness of one’s being in all its multiplicity starts to spiral in ways that inform the past-present-future paradox as a more enlivened phenomenology that says a hearty “yes” to integration, flow, congruence, empathic transference, and a vast spatiality that grows freshly and spontaneously out of a grounding in the being of one’s Being. It comes as somewhat of a shocking revelation that our core essence is one of “basic goodness” or Buddha nature (as opposed to the more popular notion of “original sin”), discovered by looking with razor-like precision at the mind. As the meditation teacher Pema Chodron says, basic goodness gives us “the capacity to be touched, by being open to the whole thing.”

In one particular moment, though, during no moment in particular, stripped finally of all the labels, recriminations, external judgment, self-loathing, and weaving of storyline, exhausted and spent from meditation’s primary edict to “return to the out breath” over and over again (over oh so many years), the icon slips at last off the mantle on which it had been long worshipped. The false self finds itself shattered on the floor, destroyed in the awareness of the truth of emptiness (form is emptiness and emptiness is form), taken aback by the eureka, mind-blowing moment of satori, the deliverance into the quiet calm of no-self, and the sweetly unfolding eternality of the now.

All the wisdom in the world is located in the gaps between breaths, in the space between thoughts, a meditation teacher once said during a formal sitting practice. But mindfulness provides no easy kick-start, requiring thereafter a personal hyper-vigilance, a growing awareness and friend-making approach toward one’s discursive patterns and internal chatter: Andenken and Inständigkeit, a thinking toward and indwelling in it. While satori’s song provides a new and sometimes soothing soundtrack for the meditator, a recalibration of the existential symphony, as Epstein (1995) points out, “Even when the obvious extremes of the false self have been divested, there is a tendency to replace them with subtler versions of the same impulse” (p. 70). As a rallying cry for the necessary development of equanimity to face and vanquish such unconscious drives and concealments, Ram Dass famously offers up the following mantra: “Ah, interesting.”

It is good news that insights obtained from this new awakenedness never go completely away. Realized as “primordial,” somewhere, awakened mind is always accessible. Yet, at the same time, the meditator learns that grasping after it is fruitless. It is attainable only through glimpses that appear from time to time from behind the overcast sky of the “natural attitude.” Reaching mind’s radiant luminosity takes great practice, patience, and diligence, over oh so many years.

But we can take heart—Zen masters have left behind a clue. As Welwood advocates, rather than solely focusing on thoughts and the content of thoughts, the this and the that of our experience, the him and the her, the we and the they, the materiality and daily grind of cause-and-effect, we can remember to explore the space around thoughts, the space between them. What is found in the gap between the out-breath and the in-breath? Where is mind then? Who are you in those spaces? Who are you in those gaps?

Welwood, J. (2000). Toward a Psychology of Awakening: Buddhism, psychotherapy and the path of personal and spiritual transformation. Boston, MA: Shambhala.

Dr. Rockwell is presenting her research on mindfulness in clinical psychology at the Second International Conference of Existential Psychology in Shanghai in May 2012.