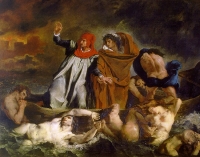 Eugène Delacroix’s 1822 painting of Virgil and Dante in Hell.

I’d like to share with you one of my finest supervision sessions. The session did not start off very promising for through parallel process, I was confronted with the same sense of helplessness as my student. However, in the midst of despair came inspiration and beauty that I would like to share with you. The student is doing his placement at a hospice and was asked to go see a female patient who was posed quite a challenge to the hospital staff. The patient was a mother who was suffering from bone cancer. She held on until the graduation of her first son from secondary school. She was in a great deal of pain and told the staff that she wanted to die. The student walked into the room and was confronted with the client’s wails and pleas for the respite of death. Here, I am reminded of Nietzsche’s powerful insight—“the final reward of death is that we die no more.” The nurses and doctors stayed away from the room because they no longer knew what to do to help this woman. They had nothing more to offer her because she had maxed out on her pain medication. They asked my student for help. When my student asked the client how he could help, the client told him that she wanted him to help her to die. She told him that she had waited long enough and that she did her part in hanging in there with the pain so as to witness her son’s graduation. However, now she wanted to be “selfish” and wished to die. My student felt helpless and desperate as well. He told me that he stayed with her a while and tried to offer her empty assurances. But seeing that they offered her little comfort, he left the room after a while. The student came into supervision asking me what he could have done. Parallel process is at play now for I, too, felt the same helplessness. Typically, when dealing with anticipatory grief, we talk about the importance of finishing unfinished business and dying with as little regret as possible. However, in this case, the client had held on and completed the unfinished business of being there for her son’s graduation. She lived up to her end of the bargain. Now, her wish was to die. Like my student, I wasn’t sure what I could do to help my student in supervision. What would you have said? Hanging in there, I thought of a few things I’ve read recently. The first thing I thought of was courage. Louis Hoffman, a fellow New Existentialist, shared that his supervisor taught him that we earn the right to be out clients’ therapist not because of our training or our degrees. We earn their trust and the right to work with them because of courage. In the “Aeneid,” when telling of the voyage of Aeneas and his men, Virgil wrote, “darkness was our guide and our leader was Despair.” And it was Virgil, the Roman Poet, who had the courage to guide Dante through the nine circles of Hell. The question before the student and I was: were we willing to enter into the hell that the client was experiencing and talk to her about death? Then, I also thought about something I had heard recently from another colleague. He shared about the importance of bearing witness—the important healing effect of simply bearing witness to our client’s suffering. Bearing witness by not running away. The running away that happens when we try to do too much, when we try to remove what cannot easily be removed. Bearing witness happens by remaining with our clients and holding and describing their suffering. Recalling these two important therapeutic attitudes, I had my direction. I asked my student to bring me into that patient’s room with him. I asked him to reflect internally and describe for me as vividly as he could what it was like in that room with his client. I then bore witness to my student’s experience. I recorded down what I heard. I mirrored it back to him. Here are my notes from that supervision:

In the midst of nowhere, neither here nor there Inevitable, yet not forthcoming Uncontrollable, letting go Distant, yet close Unforgettable Close to something, Helpless Yelling, turbulent, Intimate, not yet peaceful The Hastening of Death Life is short, make the most of lifelong dreams Guilt resists dying.

I then passed these notes and phrases back to my student and asked him when was the last time he wrote poetry? He chuckled and told me that he has not written poetry for more than 25 years. I then asked him to go home that evening and write a poem describing his inner experience of being with his client in that room earlier that day. My notes were his referential seed. Here is the poem (in Chinese) that my student wrote (he translated it himself):

Pain is our shadow! Ever closer through evasion.

Only in the face of Death’s confrontation,

its menace, its inevitability,

will we feel pain without suffering.

He brought the poem back to me in supervision the next week and told me that he shared it with the client. How did you think the client reacted? The client cried a few silent tears and thanked my student. It was a poignant moment. The client survived her period of despair. She went on to live a few more weeks. What difference did my student make? It is hard to tell. Was there any measurable change in the client? Also difficult to tell, difficult to measure. What empirical evidence can we give to our therapeutic effectiveness? Who knows? It is difficult to say for the client, but I can share with you with a degree of certitude that both my student and I were profoundly changed—the evidence being what I remembered and shared with you here in this blog. For at least one evening, my student returned to poetry. We learned more about courage and bearing witness.