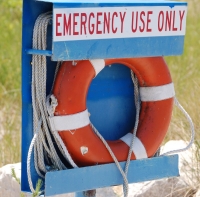 As a student, the clinics where I earned my hours had particular attitudes towards suicide ideation: it is bad and needs to be treated. Lately, I hear about an even more extreme posture from psychiatric institutions: namely, a person who reports suicide ideation cannot be discharged until they no longer report these thoughts.

I have never used a safety contract, because there is no empirical evidence it is helpful for the client (although there is some empirical evidence it is helpful for liability purposes). I try to trust the people who come to me. Of course, I work with their safety issues, just not in legalistic terms. And when there is a desire to die, this needs serious and compassionate attention.

But some people experience suicide ideation every day or nearly every day without ever really wanting to die. Sometimes the thought seems ego-dystonic, sometimes it is intrusive, and often it is a comfort for the person.

We can think of suicide as fulfilling one of two usual functions. First, if a person is in a situation they see as both intolerable and irreparable, suicide appears the only reasonable escape from this situation. Second, sometimes the intolerable and inescapable is not a situation, but an unacceptable part of the self. The act of suicide, then, is the attempt to purge this part of self. The rest of self is collateral damage.

When someone thinks of suicide frequently without planning or intending it, often the thought provides hope to the person. Suicide ideation perhaps does not seem terribly hopeful to most people, but imagine feeling otherwise powerless, tired out, used up, and stuck. The powerless person can imagine for a moment that they have some limited power—I could choose death!—and this power makes the choice of life just a little more bearable.

It isn’t that life is great compared to its absence. The power of the thought is not in seeing that it could be worse. The power is in seeing that one has options—freedom, even limited freedom—the need for humans to feel in control of their destiny even when subject to the dictates of others.

An existential approach often does not seek to eradicate non-normative behavior, but to sit with, listen to, and grow from it. The trouble with the psychiatric model here, primarily, is that people learn to lie about their thoughts in order to leave the hospital. Nothing has changed except they acquire an even more negative view of this part of self that cries out to die. An existential approach, in contrast, might invite the person to get more in touch with this part of self. To listen to what it has to say, to be informed by it. We could even come to value these thoughts as an outlet for the need to escape or feel control, rather than aggress towards them as alien interjects.

A man I know, who has given explicit permission for me to write of this, has experienced suicide ideation multiple times each day since the age of about 15. For close to 25 years, each day he chooses to set aside these ideas and go on living. It wears on him sometimes and he tries to substitute other thoughts—sex, video games, running away—but the thoughts of suicide are always there in the background.

About 10 years ago, they were so loud and insistent that he went to the hospital. Antidepressants dulled the edge for a while, but what really made it bearable was getting out from under a very oppressive situation. Lately, as he comes to value these thoughts for what they are to him—a valuable safety valve—he is less troubled by them. And the less he is troubled, the less intrusive these thoughts are.

Rollo May contends that even the most dire and painful human experiences are still human and of value. Despair, for example, in the moment is a crushing and devastating feeling. And sometimes it is a necessary reaction to events and circumstances. Who could live through the 2008 Sichuan earthquake—losing family, friends and livelihood—and not feel despair? And despair can also lift us up, make us strong, drive us to change ourselves and our environment. Despair, if valued, informs us about what is wrong and drives us to make it right.

Thus, we come to another value of suicide ideation. To be informed by it rather than to treat it away is to have this opportunity to despair. There is risk in despair as there is risk in all other human activity. And it takes courage to engage with risk.