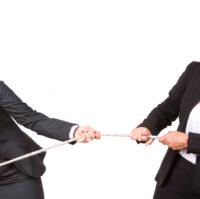 I like to challenge. Not in a competitive sense, but in an inquisitive kind of way. No idea or ideology is safe near me. The status quo should tremble when I walk by. In fact, it would if it could.

Naturally, when the subject of competition in an organizational setting arises, I feel moved to ask a few questions, like: What’s the purpose of competition and how does it serve us? Is there another way to reframe the use of competition for production that companies attempt to create amongst its employees? How does competition for the sake of peak individual performance affect gross collective achievement?

I’ve started watching food competition reality shows recently. Before picking up this hobby, I’d always considered the work of chefs similar to that of artists—an inspired act of expression for expressions sake. Chefs combine flavors, textures, and aesthetics to satisfy their yearning to create and our desire to be delighted. So I was shocked to discover the culinary world’s competitive culture. My assumption was that the art of cooking isn’t inherently competitive given it involves the subjective sense of taste and an intrinsic motivation to create with food. How did such a beautiful and enjoyable thing become a fight for supremacy?

Imagine the following scenario, adapted from the Pulitzer Prize-winning play Glengarry Glen Ross, unfolding in a workplace. A tough executive chef tells his team, “We’re adding a little something to this month’s ‘top chef’ contest. First prize is a Cadillac; second prize is a set of steak knives; third prize is you’re fired.”  Playing fairly under such circumstances might include working longer hours and studying new techniques. However, under the stress of losing one’s job, I can imagine the ethic of fair play is easily undermined. Sabotage and deceit could quickly come out of one’s survival kit. When one is positioned against rather than with the other, the spirit of a collective purpose is sacrificed.

Collaboration, another C-word, has a similar ability for enhancing a team’s production; however, its methods for doing so are quite different. Where competition seeks to divide and conquer, collaboration seeks to combine and create. In a 2012 Design Management Review article, Kingshuk Das, an innovation strategist at Jump Associates, described a successful company where partnership flourished despite very different world views and personalities. This flourishing happened because, Das explained, management and employees were able “to identify and work toward shared outcomes. They did this mainly by tapping into the other groups’ motivations, ignoring personal biases, and playing to their own strengths.”

With that in mind, let’s attempt to imagine a slightly different story. What might the outcome be if the executive chef said, “We’re adding a little something different to this month’s collaboration. Ask more questions of your colleagues. Share what you know with one another and find value in their knowledge. Seek to replace ‘who’s the best’ with ‘how are we better together?’ and let’s see how we develop individually and collectively.”

What I’m suggesting is a re-examination of the use of competition as a method for enhancing performance and production. Our world view is shaped by our mental models and if the pursuit of an organization is to grow and prosper, it is worth reconsidering the metal models that are guiding that pursuit. This conscious effort may be the difference between success and failure; unity and division; innovation and stagnation.

Why compete when we can collaborate? Unless our sole focus is to serve ourselves, of course.

Read other posts by Joseph Alonzo