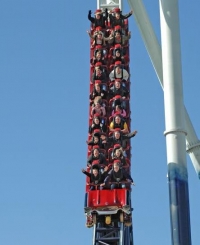 The mass of men live lives of quiet desperation ~ Thoreau

If you have eyes to see, you’ll see it everywhere. If you listen carefully, you’ll hear it. Most times, logging into Facebook provides an overwhelming dose of it.

It looks a lot like the person who can’t wait for the weekend.

It sounds like the person who walks into the office saying “I hate Monday!!”

It’s the person who hates their job but needs the money.

And it’s that friend who is miserable in their marriage but can’t stand to be single.

You know what I’m talking about. You see it, recognize it, and maybe even live it. Thoreau called it “quiet desperation,” and I think he nailed it on the head. It’s quiet because it’s insidious…it’s there on the inside, and most of the time, people do a great job of hiding it, but every now and then, it comes creeping out. Suddenly, if we’re paying attention and don’t run off to medicate the ache with something else, we will realize that we’re desperate.

I believe that those feelings of desperation are caused by our tendency to exist instead of live. We live in such a task-driven society that, many times, we forget what it means to be alive. Many times, people have lived their lives in a quest to become something they think they ought to be or to be what others think they should be. Somewhere along the line, they forgot who and what THEY wanted. Existing is just getting through the day, the week, the month or the year always hoping that the future will be better, but finding, at the end of the day, that you’re still just as unhappy as you were the day before. Existing causes regret—regret over the missed opportunities, the words left unsaid, the adventures unlived.

Now, living…wow! You have probably seen people who are truly alive—I know I have. It’s the woman who dances in the rain, unashamed and not concerned about what others might think. It’s the man who willingly allows his daughter to paint his toenails and put makeup on him, just because he wants to spend time with her and that’s her favorite game. A life well lived ends with celebration and joy instead of grief and sorrow. The well-lived life leaves a legacy and hope for those who have the privilege to participate in it.

So today, I challenge you to set aside existing and begin living. Start small by getting out of your comfort zone and do something that challenges you. Buy that dress you’ve been looking at. Wear glittery shoes during the day. Go skydiving. Ride that rollercoaster you’ve been avoiding. Apologize. Kiss more. Love deeper. If you challenge yourself to live each day, fully present in the NOW moment, you will find your life becoming more and more fulfilled.