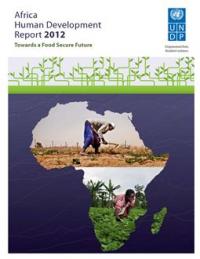 The United Nations Development Programme (or UNDP) published its first human development report addressing African issues in Nairobi, Kenya, last week. The Africa Human Development Report 2012: Towards a Food Secure Future asserts, “If countries in sub-Saharan Africa are to realize their potential, they will need to overcome the undernourishment that afflicts more than a quarter of their people. Neither food security nor sustained human development can be met through economic growth alone.”

One in every four Africans—nearly 218 million people—is undernourished, according to the UNDP.

Sub-Saharan Africa’s current economic growth averages about five to six percent every year, officials with the UNDP have said. “Impressive GDP growth rates in Africa have not translated into the elimination of hunger and malnutrition. Inclusive growth and people-centered approaches to food security are needed,” Helen Clark, administrator of the UN Development Programme, told UN News Culture after the release of the UNDP’s report.

The UNDP’s report indicates that “eliminating hunger and starvation in sub-Sahara Africa and ensuring food security for all is critical for long-term human development and makes a series of proposals for public action to spur agricultural productivity, advance nutrition among children and women, build resilience in households and communities and for empowering women and the rural poor.”

The report calls for “new approaches covering multiple sectors from rural infrastructure to health services, to new forms of social protection and empowering local communities and ensuring that the poor and vulnerable have greater voice through strengthened local government and civil society groups to ensure food security for all.”

Many of the issues Africa faces today, like food security, are not new. Many African countries continue to receive local and international funding to support programs that are expected to address what some consider to be the most pressing issues: poverty, chronic hunger, disease, ignorance, and illiteracy.

While there has been some progress in areas like infrastructure development, there is still a great need for African governments to meet the basic needs and uphold fundamental human rights of the majority of its people despite millions of dollars in funding for programs geared towards addressing these issues. There is also a critical need for the public and private sectors to partner in investing in Africa’s human capital to help address these issues.

According to the World Bank, “Africa’s urgent priority is to reduce poverty through strong and sustained economic growth that benefits the poor and through improved social services. But no country has succeeded with levels of human development as low as those found in the majority of African countries today. Human development is one of the major challenges facing the region and human capital is a critical factor in the fight to reduce poverty and reach the millennium development goals.”

The UNDP’s 2012 report and the World Bank’s findings both reflect significant social and economic inequities that continue to negatively impact overall progress in human development in Africa. Both sources indicate the need to do better in meeting the needs of children, youth, women and the poor—a reflection of existing systems that have neglected the majority of the African population, which continues to languish in poverty and is afflicted by chronic hunger.

In the vide Why Should Africa Invest in People Now?, World Bank Director of Human Development Ritva Reinikka laments that much of the focus in development in Africa has been on addressing the infrastructure gap and energy as opposed to investing in human capital, like developing skills, educating people, and ensuring healthy populations. Reinikka points out that Africa has the largest number of young people that now live in new democracies and require skills and opportunities, like jobs.

Reinikka posits that education, healthcare, and social protection systems are critical because they provide opportunities for young people and whole populations, but many of these systems in Africa are weak and have failed to provide the opportunities they should despite the large amounts of public funding they receive.

In her 2011 book, Creating Capabilities: The Human Development Approach, moral philosopher Martha Nussbaum inquired, “If a country’s gross domestic product increases each year, but so does the percentage of people deprived of basic education, healthcare, and other opportunities, is that country really making progress? If we rely on conventional economic indicators, can we ever grasp how the world’s billions of individuals are really managing?”

Nussabum argued that “our dominant theories of development have given us policies that ignore our basic human needs for dignity and self-respect.” She proposes an “alternative model to assess human development: the capabilities approach,” which begins by asking simple questions, such as: What is each person actually able to do and to be? What real opportunities are available to them?

I wonder what role Africa’s organizational leaders in both the private and public sector can play in helping build the capacity, systems, structures, processes, policies and practices that would help answer these questions. To be continued in a future posting.