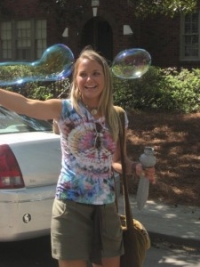 Photo from the Copeland Family

The most basic premise of existentialism is that we are all going to die eventually. No matter how much we may try to escape it or deny it, as Ernest Becker says, death will come for all of us.

In a recent post to a Society for Humanistic Psychology list serve, David Elkins discussed some of Becker’s work, saying that in some ways, Becker paints a crude picture of humans as decaying animals, albeit, decaying animals with the ability to dream, think, create, and love. But at the very heart of existential philosophy, according to Elkins, is the question that he said Sartre, Tillich, and others have posed: whether we should live or kill ourselves.

This question has been brought home to me in an incredibly visceral way over the last few weeks while following the story of one of our colleagues, Aimee Copeland, a Master’s student in psychology at the University of West Georgia, one of the few humanistic psychology programs in the country.

For those who have not heard Aimee’s story on the television news or read about it in print or on various websites, the details are harrowing. In short, while on vacation with friends, Aimee was riding on a homemade zipline that snapped, plunging her into a river where she gashed her leg on a rock. She had emergency care for the very large gash, which was stapled. But Aimee was in a lot of pain and returned to the hospital for additional care. She received painkillers but was still suffering. By the next day, a friend found her pale and weak and took her back to the hospital, where she was diagnosed with necrotizing fasciitis—flesh-eating bacteria—and transported across Georgia to a hospital in Augusta, where her leg had to be immediately amputated from the hip. In addition, she needed part of her torso removed. For days, she lingered on life support, and her family could not be sure if she would survive each night.

Miraculously, three weeks later, Aimee’s lungs are now healed enough that she no longer needs a respirator. She is awake and breathing on her own, albeit through a tube. This weekend, she was able to speak her first words aloud. Although the disease will also cost her her other foot and all her fingers, Aimee appears ready to face the challenges ahead according to her father, Andy, who has been keeping well-wishers apprised of her progress with almost daily blog updates.

I first became aware of the story because a friend of mine is her classmate, and that classmate asked all of us to send prayers and good wishes for her recovery. My first thought, however, was how easily it could have been any of us graduate psychology students. And in my mind that includes those who have already graduated, because I would hope that we are all always learners, especially as existential-humanistic practitioners.

Then, I kept ruminating on what I would do if I were in Aimee’s place.

Would I want to survive in the world minus my leg, my other foot, and both hands? Would I be able…and willing… to do whatever it took to recover physically and emotionally from this trauma? Or would I just want to choose death?

As I thought about this, I kept vacillating. Part of me thought about choosing death, but then I kept thinking of the story of Matthew Sanford, an Iyengar yoga teacher, who has been teaching yoga for years despite having been paralyzed from the chest down in a car accident at the age of 15. He has talked about how he has developed a perception of his legs in space that he integrates into his yoga teachings, although no doctor could quantify it with scientific measurement. Although confined to a wheelchair, Matthew travels around the world teaching Iyengar yoga workshops and has written a book about trauma and transcendence. In light of Matthew’s tale, I then realized I would probably choose life.

Initially, when Aimee first regained consciousness, her family did not tell her about the extent of her injuries, and were concerned for her emotional state when they thought she was strong enough physically to hear. But Aimee has proved stronger than anyone anticipated, responding to the news of her injuries with tremendous equanimity, and her father said even responding with a reply of “Let’s do this!” when told of the additional amputations needed to save her life.

I am amazed, astounded, and profoundly moved by Aimee and her progress. I cannot talk about or even write about her story without tears—I am filled with them now. I have also watched the unbelievable—or believable—outpouring of support, compassion, and prayers for her not only from friends but also from strangers. A Facebook page entitled “Believe and pray for miracle to happen for Aimee Copeland,” which contains many of her father’s posts and updates, has more than 74,000 “Likes” and more than 16,000 “Talking about this.” NBC’s Today Show has done at least two segments on her story, CNN has reported on it, as have the Atlanta Journal-Constitution, AOL/The Huffington Post, and a multitude of other news organizations. Even before the story hit the airwaves, I was reading comments on her father’s blog post from people who said they did not know Aimee but were so moved they wanted to reach out to her through cyberspace.

What a beautiful showing of community! A profound example of Being-in-the-World with Others, where people who once were strangers come together to share and give compassion and strength for another, because we are all connected.

In my imagination, I see Aimee emerging from this and returning to her psychology studies with an insight into the real experience of trauma that would be such a blessing for her potential clients. Her father, Andy, wrote in his May 27 blog that he and Aimee have already discussed ideas of how to utilize wilderness therapy/eco-psychology for amputees. But even if she chooses another path, I am in such awe of her for deciding to choose to embrace life and I wish her continued strength and courage on her recovery journey.