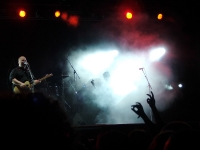 According to new research, pop music has gotten significantly sadder over the last half-century.  That’s measured in terms of tempo (it’s gotten slower), key (minor keys have come to predominate), and subject matter (songs are more “self-focused and negative”) … all combining into a serious case of the blues.

Indeed, the proportion of songs in a minor key reaching the top of the pop charts has doubled in the past 50 years, reaching almost 60 percent by the second half of the last decade.

Could this fact be making a statement about the society we live in – or about music itself?

“Throughout the 17th and 18th centuries,” researchers E. Glenn Schellenberg and Christian von Scheve say, “pieces tended to sound unambiguously happy or sad.” But by the Romantic era an unbroken line from Tsychovky to Ravel to Mahler took classical music away from simplicity and towards “mixed emotional cues.”

But of course it’s also worth noting that classical music existed before the “modern” era – and it was only as we reached modernity that the music became increasingly complex, difficult, and … sure, why not? … depressing.

If this process has happened in a vastly accelerated time frame for pop music, well, pop music was born in modernity.  It is a child of the modern era that began … at least in the form of Rock and Roll … as a protest against the strictures and formalisms of music and society both.  Primitivism was the point.

It is not a coincidence that pop music has followed the same course as classical music:  it’s been captured by the same social forces.

Which is to suggest that the evolution of music in the West is less about music and more about the West.  Is it a coincidence that, during the exact same era that pop music was jamming to a minor key, the number of reported anxiety disorders jumped 20 fold over 30 years?  We became a culture at the exact same time that our music became self-absorbed and negative.

The art of the post-modern era is complicated and sad because it’s an accurate reflection of all too much of our lives.  Our very modern lives.

Much of the development of the social sciences in the last century (indeed, arguably their raison d’etre) has been to find ways of fixing or justifying humanity’s unhappiness in the world we have made.

Interestingly, this leads us to the point where existential and evolutionary psychology connect:  both posit a “human nature” that, though astonishingly flexible, can’t be bent past a certain point.  There are circumstances under which we cannot be expected to thrive.

But whereas evolutionary psychology sees this as a limitation and (all too often) a call to go back the way we came, existential psychology has at its heart the premise that even in impossible circumstances, human beings can make meaningful choices about how to move forward.

Viktor Frankl epitomizes this ideal:  even at Auschwitz, he observed that those who saw their lives in terms of a meaningful struggle and set of choices tended to thrive.

The changes in pop music, to my mind, lend credence to this existential paradox:  right now humanity exists in a hell of our own making where we cannot be happy, and yet we find many meaningful ways to thrive.  One of them is to create music – music that, whatever it’s “supposed” to do, we make reflect and speak to our real lives and deepest concerns.

We are in trouble:  modernity does not suit us, and our essential human condition will not change to support it.  But we still affirm ourselves as creative beings, who find options where none seemed to exist before.

As long as we’re making music, we’re moving forward.  That music will change as our aspirations do.