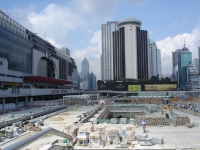 I am just returning from the tour that surrounds the International Conference on Existential Psychology in China. We began our visit this year in Shanghai. Most went home from there, with some moving on through other cities. I did some training in Wuhan for pastoral counselors and met up with the rest of the travelers in Shenzhen; we went through Hong Kong together.

Our policy is to try to stay in low-rent places, because Western money can be very destructive. In places like Shanghai, local people cannot afford to live, as Dollars and Pounds and Euros inflate the housing market. There is too much profit in luxury accommodations.

Lately, our policy has been difficult to enforce. As we deal more and more with important universities, some level of politics becomes unavoidable, and we wind up in places that are fancier than we would choose. Consequently, we have not seen many places that are more than a couple of years old. As China’s construction industry booms and booms, there is always a new, shiny, marbled palace to visit.

In Shenzhen, we encountered a place that was more than a couple of years old. It was faded and shabby, although there remained evidence of its grandeur. I was so happy to see a place that seemed real, that was lived in rather than impressive, that I wrote this piece:

Outside, the garden
Flourishes under sunlight and humidity,
Well-tended and full of life.
A black butterfly flits past
On some inscrutable errand.
Fish glitter in the pond,
As shiny as the coins
Dropped there for luck or hope of luck.
Inside, the hall
Is filled with mold spores
By a rattling air conditioner
That chatters over a carpet past its prime.
Insects crawl in the curtains
In this ballroom past its time.
Outside the men’s room,
A rice bug lies on its back,
kicking feebly; its battle it already lost.
The place is slowly being reclaimed
by the Earth.
Chairs,
Brightly colored in
Chinese sensibility,
Sink slowly back into the ground.
This is a place past its time.
Outside the window we can see
Disrepair reclaiming the roofs.
Inside, the paneling and crown molding are damaged.
Things are stained, shabby,
but full of bygone grace and elegance:
Cherubs who will never age
watch from their painted faces
on the doors.
It is a beautiful place,
An aging friend growing wrinkled
And scarred by time.
Perhaps it will be plowed under soon,
Too old to be popular, but too young yet
For reverence and preservation.
Perhaps this place could be better cared for.
Perhaps some new paint,
Some effort with sandpaper and a hammer,
could reverse some of the entropy here.
But for now, the entropy has its own beauty,
And the neglect is essentially benign.

But here’s the thing. When I was finished writing this, as the last words dropped out of my mind and onto the page, I suffered a revelation. This poem is not about some lived-in Holiday Inn with carpeting from the 1980’s. It is about a friend of mine who is starting to encounter limitations associated with aging. This is a man for whom I have tremendous respect: strong, vital, athletic, and with huge integrity. I have struggled watching him struggle.

I invite you to go back and read this work again with this relationship in mind.

Someone in my family used to be a mortuary mortician. She always tried to tell me there is beauty in aging and death, that leaving the world—gradually or suddenly—is a beautiful process. I could see she believed it and could empathize with the feeling. Only now am I beginning to glimpse what she might have meant.