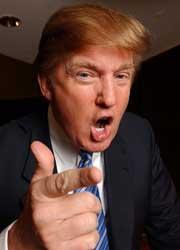 Watching the show on TV a few weeks ago, I was struck by how its premise runs completely counter to the ideals of collective intelligence. Even though we’re watching teams compete, the show isn’t about teamwork—it’s about 18 individuals trying to take credit and deflect blame as they vie for Trump’s recognition at everyone else’s expense. Each episode culminates in a tense scene where Trump “fires” one member of the team that lost the most recent challenge. By the way, how can Trump fire contestants if the only one that gets hired is the one left at the end of the competition?

The assumption is that, when a team fails or succeeds, you can single out a responsible individual. It’s a bit like blaming your esophagus if you’re unhappy about what the scale reads when you weigh yourself. It makes for entertaining television, but looking for the hero or the scapegoat on a team destroys any chance of reaping the benefits of collective intelligence.

Among other things, collective intelligence is the capacity of a group of individuals to tap into the power of collaboration in a way that produces outcomes that surprise even themselves. The key word here is “surprise”—a team that successfully leverages its combined wisdom can generate new solutions that aren’t traceable back to any one individual. Your team’s interactions can produce fresh ideas that the group is passionate about, resulting in dramatic performance improvement.

One factor that promotes the emergence of collective intelligence is “interlocking success,” or what some researchers refer to as “outcome interdependence.” Interlocking success refers to a situation where every individual team member’s success is tied to the achievement of others. In cases of true interlocking success, no team member can be successful without ensuring the success of everyone else. Improvisational acting troupes are often told, “Your job is to make everyone else on stage look good. If everyone does their job, everyone looks good.”

In The Apprentice, the individual identity never takes a backseat to the collective identity. Think about the best team experience of your life. I’ll bet it meant something to introduce yourself to others as a member of that team.

So how can you boost a team’s collective intelligence? I got some ideas from the book, Emergence: The Connected Lives of Ants, Brains, Cities, and Software. In it, author Steven Johnson explores how complex and intelligent systems (like ant colonies or brains) naturally emerge from the interactions of individual agents (like ants or neural synapses). Two of the principles of Emergent Systems are instructive:

Pay Attention to Your Neighbors
The most important interactions in emergent systems are between individual agents in close proximity. Johnson generalizes the principle as “local information can lead to global wisdom.” Teams in organizations are microcosms of the larger culture. You can understand a lot about how the organization will react to the work of the team by paying close attention to how team members interact during working sessions. Ask the question: In what ways will our current interactions, thoughts and feelings be replicated by those outside of the team as we begin communicating our conclusions? What can we learn from our own initial responses that can prepare us for how we take our work forward?

Encourage Random Encounters
Unstructured and unexpected interactions between individuals improve a system’s adaptability. When members from your team mingle outside a formal group setting, they build connections and exchange information in surprisingly beneficial ways. Think of going to a conference: Often, the most useful ideas result from informal discussions outside structured meeting time. You can help promote similar informal communication among members of your team and between your team members and the broader organization.

Of course, unlike ants, each of us is more than our collective, team identity. The balancing act between tapping into our collective intelligence without losing our individual perspective is the great challenge and the great reward of teamwork.