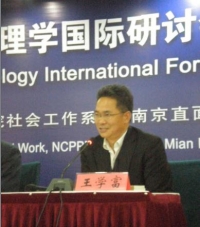 Wang Xuefu was the first psychologist I met in China in 2003 with a commitment to an indigenous psychology. It was he who introduced me to the Chinese novelist, Lu Xun, and to the notion of Zhi-mian (the courage to face the future), and I have been reading both Wang and Lu Xun ever since. Over the years, Wang has been in conversation with Western existentialism even as he has continued his work on the indigenous emphasis on Zhi-mian.

Wang reflects four characteristics of culturally sensitive existential psychologists, categories that have emerged as I have studied the lives of psychologists internationally: (1) a profound cultural identity, (2) a prophetic stance vis-à-vis their own culture, (3) the freedom to borrow from other cultures, and (4) at the same time to mine their own cultural tradition.

1) Cultural identification. Wang’s response to his social context is to recognize his profound situatedness within culture:

Understanding Chinese culture includes examining its various pathologies and exploring its resources for healing. On the one hand, I have witnessed a lot of problems in China caused and sustained by devastating cultural factors. On the other hand, I have become aware of the abundant resources for therapy that permeate Chinese culture—its philosophy, medicine, literature, religion, and folk culture. All these can be integrated into therapy for the well-being of a people. As a therapist in China, I liken myself to a tree deeply rooted in Chinese culture absorbing nutrients and bearing fruit year after year….

When I identify myself as a psychotherapist I cannot dissociate myself from my culture which has shaped me into “the being that I am.” … My primary cultural awareness lies in the fact that every human being shares basic biological constitutional elements but is shaped differently by the cultural factors with which he or she interacts. (Wang, 2008, p. 4)

2) Prophetic. German, and now American psychoanalysts, have set up shop in China. The family therapy of Virginia Satir is marketed widely. China itself has strengthened testing of counselors and provided certificates at three levels. However, locally constructed psychologies are rare. Wang complains that:

What we do is just dance to the pipe of Western psychology while turning a deaf ear to our own rich psychological thought rooted in our cultural tradition. In the area of psychotherapy, as well as in other fields, if we continue to ignore our own cultural resources, we may fulfill a Chinese saying that says: ‘Unaware of the inexhaustible wealth of his family heritage, he begs from door to door to stay alive.’ (Wang, 2008, p. 3)

Wang is concerned about the escapism and passivity in his own society. He states:

To be a culturally sensitive therapist, I am aware of the suffering and woundedness of my society (the Nanjing Massacre, the Cultural Revolution, etc.) as well as that of the individual. These national wounds are still there in the collective unconscious of my nation calling for healing. To be a culturally sensitive therapist, I need to go deeper for an understanding of my culture and see how this culture has influenced me as well as my people. I assume that the deeper I understand my culture, the deeper I can know myself and my clients. It is this depth that determines the degree to which a therapist can be of help to his or her client. (Wang, 2008, p. 4)

In my limited cross-cultural experience, I have come to understand that different cultures can attain the same wisdom. As a Chinese saying goes, ‘Sages of the East and the West coincidentally present similar understanding and reason.’ Therefore, as I am socialized to be a therapist, I am open to wisdom from both the West and the East. I am also aware that being a Chinese therapist (or an Asian therapist) differs from being an American therapist. (Wang 2008, p. 3-4)

Wang admits that many Chinese do not understand the full meaning of the Western term “existence” but he is confident that Chinese people understand Zhi-mian. And Zhi-mian is consistent with existentialism.

4) Cultural Retrieval. Chinese culture is rich with insight into human pathological behavior and wisdom for healing available in folklore, folk customs, and from shamanic healers. From Confucius, Wang learns the importance of education, cultivation, modeling, setting up examples, teaching, guidance, care and concern, nurturing, parenting, etc., from which a kind of teaching therapy can be developed. From Taoism, he suggests that we learn about the unending pursuit of awareness, which may help address compulsiveness. Zhuang Zi can help in terms of leading people from a closed self (lost in blind desire and self-contradiction) to a larger self integrated with nature.

Wang Xuefu is increasingly dissatisfied with current clinical programs. Teaching for him is a relational process, and in university programs he knows, the faculty are largely inaccessible, personally distant, and boundary conscious. Reaching back into his distant Chinese past, Wang is developing an apprentice model for lifelong learning as a healer. In an ancient Han ritual, he recently accepted five therapists as apprentices. The ritual is elaborate with scripted questions and responses given while dressed in ancient gowns. Meetings with the Master teacher are irregular and the length of meetings may be from a few hours to a month-long retreat. The Master teacher is transparent about his life, dreams, foibles, and healing. The relationship endures whether the apprentice chooses to remain or to explore other directions. The otherness of Xuefu’s model is not easily assimilable in our Western approaches.

There is much here, it seems to me, that Western psychologists can learn from. Our existentialism has been characterized as individualistic; Wang’s existentialism is rooted deeply within culture. It may be that existentialists of the past (Kierkegaard, Sartre, Camus) were critical of the religious and political situation of their day but those voices seem muted. Not so with Wang Xuefu.

Today’s guest contributor, Al Dueck, is the Evelyn and Frank Freed professor of the integration of psychology and theology at Fuller Graduate School of Psychology.