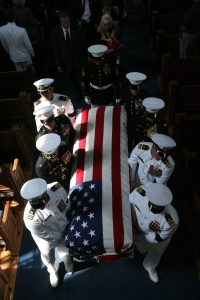 Many veterans and soldiers of combat (around the world) become lost into traumatic experience, never fully returning to what may have been former selves, ways of being, and ultimately, a lost sense of meaning and relatedness. Finding no sense of meaning after having to see comrades die, killing another human being, or even being continually “on guard” in perpetual fear of a threat that cannot always be seen (and often projected upon an image of a certain faces of a culture that is then equated to “enemy”), many soldiers and veterans see their once understood foundation of selfness to break—a complete unraveling.

This is not something that can be solely medicated back together or even remedied by other isolated means of support. This takes an integrated effort that must first embrace the notion of the soldiers’ and veterans’ suffering a collective issue, and not just their own. If help is really to reach others, then the helpers must also take “social responsibility” for the soul suffering that leads to suicide.

This begins at the very top and is a systems issue. This is not just a military and a Department of Veterans Affairs (VA) issue. Everyone is responsible for what is happening to others, especially when the victimized group is represented in combat and war, fought in our name, whether or not we agree with the reasons for the conflict, “we” are responsible for it.

War and combat invite trauma—there’s no way around it—and it’s not clear who will become traumatized by their experiences; it just occurs. This then opens the door for potential traumatic stress, which has been proven time again to affect functioning. In combination with other possible stress factors, the idea to die may come as a relief. Suicide arrives as an exit for those who really cannot see anything else, but are bombarded by such anguish, despair, guilt, and meaninglessness.

The consequences are tragic: more than one soul dies in a suicide. So, in search for understanding and meaning of the lived experiences of loss, trauma, and the worst of human experiences, while having no resources to deal with them, suicide may appear as the sane response. A sane response in a dark world of existence where there may be no other response to see an alternative. Healing must address the insanity of the larger world’s decision that leads to a waste of one’s beautiful and unique life for purposes, whether described as the pursuit of interests or as a quest for “peace,” that ultimately create more conflict and convey a message of bullying, dominance, and control no matter the intentions.

Suicide, then, should not be a surprise, given the current climate of ignorance of the war experience and disconnect from responsibility for it. This is especially true when pressure to heal the “wounds” is placed upon the very system that is so efficient at creating the traumatic stress. We cannot expect a system that is refined in the ways of war and combat to also create the antidote (or the conditions for healing). The mindset of how we are giving help needs to change. This needs to be a collaborate, non-partisan endeavor to incorporate what can truly help, i.e., to provide the opportunity for veterans and soldiers to validate their darkest experiences that they are often without a language to express and may not know how to ask for help in a culture that does not endorse seeking help. They need guides for the integration of their experiences. They need invitations for healing to become part of a community that has acknowledged what has been done, their role in it, and that each broken human being is welcomed home from it all. Rather, the current expression is a focus for overwhelmed, understaffed facilities to mend wounds. How can this be the expectation, and what help can really come from this? A system that is under pressure to “clean up its mess,” while the rest of the country (or world) can go about its business, will not provide any relief for suffering of this magnitude other than perpetuate the suffering.

Suffering soldiers and veterans express an internal, experiential chaos that is often spiritual, psychological, emotional, and physical in expression. This is accompanied with no visible path and with no community that reflects an acceptance of their experiences, let alone acknowledge a real understanding of their horror. Each is left a drifting soul along the void-filled territory of “no-man’s” land. When this exists in combination with other stressful demands (e.g., financial, relational, traumatic events, loss of job or home), then the opportunity for suicidal thinking is high, and it should not be considered unnatural—human beings can only tolerate so much pain. The current suicide rate for military personnel for this year alone is at least one per day, and is the second cause of death in the military. This is unacceptable. It is highly offensive and inappropriate to hear and still see major influences in the military state that suicide is a completely selfish act, and that it represents an inability to “deal” with real-life problems. It is also unrealistic for us to expect soldiers and veterans to not be hesitant in reaching out for help when such stigma persists from within the military culture (and beyond). Asking for help should not be a shaming experience.

Let us also keep in mind that even if individuals knew they were entering war (voluntary or otherwise), it’s still a decision beyond them. It is one that made by governing powers and societies, who are not only responsible for creating the destruction, but also in planning for the care of those involved during and after the events. Part of this planning is to acknowledge all potential risks and how to best meet them, instead of avoiding or denying they exist. This is a systemic, social issue that extends beyond the very systems that promoted war, and there are many variables to consider as well for the individuals in combat and war, which may contribute to suicide (e.g., poor judgment, “risk” behaviors, self-neglect, substance abuse).

Ultimately, the loss of belief in what might have held core meanings may have a tremendous effect upon the will toward an act of self-death, and the “helping” requires a lot more than what medication, conventional therapy, and the military and VA systems have to offer.