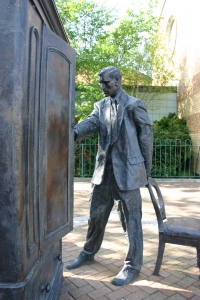 A statue of C.S. Lewis in Belfast

The end of this month marks the retirement of a man who has been a significant and influential guide in my life. For almost seven years, we worked together as a ministry team in a moderately sized congregation located in Minnesota’s Twin Cities. As I have reflected over the 35 years I have worked, my time with Randy was a time of growth in understanding, insight, and perspective. Randy is closing this chapter of his life of full-time ministry as a pastor, and I want to honor his transition by sharing his influence in my life.

Randy is an individual with a clear sense of identity, understanding where he ended and others began. From the first time we met during my interview to the time I left our partnership in ministry, he was persistent in defining his boundaries and parameters. He knew when to hold his own perceptions and perspectives to himself, and when to share what life and relationships had taught him. Randy is accepting of others and their perspective, even in moments when he was diametrically opposed to the other’s stance.

He is a scholar. Randy and I shared a love for C. S. Lewis, as well as Clint Eastwood. As part of his graduate work in English Literature, Randy spent some time in England studying Lewis. Our conversations about Lewis’ writings and life were stimulating and enlightening. I was frequently in awe of his ability to recall specific statements Lewis had made, as well as his ability to apply Lewis’ perspective concerning a current event taking place in the culture or the church. In Randy’s office, there was a life size cut out of Clint Eastwood as one of his characters from the spaghetti western days. I frequently referred to Eastwood’s character Dirty Harry Callahan as “the late twentieth century philosopher,” and we would recite dialog from Eastwood movies (his recall was always much better than mine). Because of his background in English Literature, I found Randy’s teaching of Christian doctrine and the Bible unique and more open then I have experienced with others connected to the church. His approach to theology was refreshing and renewing, something I did not fully understand until much later.

Most importantly, Randy is an exceptional pastor. Randy has gone about his role as a pastor as a servant, sharing compassion, kindness, and love with his parishioners. I learned from him how to relate to people of all different types. He was as comfortable talking with the blue-collar factory worker as he was talking with a scholar. Repeatedly he lived being present with someone whether it was experiencing a divorce, receiving bad health news, or celebrating the joy of a birth or a marriage. His own life and struggles taught him the importance of coming along side someone in their joy or pain, and sharing in the individual’s experience.

On a cold, snowy Sunday morning in November of 1992, Randy came directly from a morning of leading worship and teaching to the hospital where my wife and I were mourning the death of our baby boy. Despite a full morning of interacting and listening to his parishioners, he came to the hospital room, and sat with us … listening, hugging, holding our hand, and just being present with us. His message at our son’s funeral is one of those that has never left me, and did much to shape my future interactions with people who were experiencing pain in their lives.

In my spiritual journey, Randy stands out as a person who lived his beliefs. He was honest about his own questions of faith, and he held firm to that which he believed to be true. He took reflection, meditation, and prayer seriously, which made itself evident in his speech and his writing. He gave himself the freedom to be himself, while at the same time taking responsibility for his choices and actions.

Let there be no misunderstanding, Randy is not perfect. What is refreshing is he acknowledges that, he is not afraid to step forward, apologize, stating his wrongdoing, and asking forgiveness. Randy lives humility in its truest form, not as a false sense of unworthiness. He demonstrates confidence, and at the same time, recognizes his limitations (“A man’s got know his limitations.” Dirty Harry … sorry, I couldn’t resist).

I do not believe Randy would describe himself as an existentialist. Yet, from my perspective, he is an exceptional example of the core beliefs of existentialism. Randy engages with the human experience. He lives a life of purpose and meaning. Randy has looked into the abyss of death and lives life fully. All of this he does in a context of faith and spirituality with a depth rarely found in the Christian faith today.

I am blessed to have worked with Randolph Sherren, and I am thankful for the gifts he has shared with so many others and me. Randy, as you begin this next leg of life’s journey, may you experience the joy, hope, comfort, and energy you have given to the many you have touched throughout your ministry!