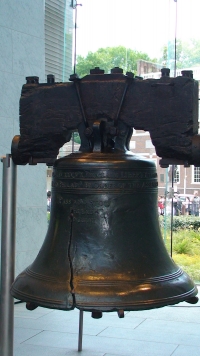 As Americans, we pride ourselves on being fierce advocates for freedom, as well as national and individual independence. Historically, these have formed the foundation of our collective value system; generally speaking, they continue to function in this essential role, and our annual celebration of this fact is both necessary and inspiring. It certainly would be very difficult, if not impossible, to legitimately and convincingly argue that Americans do not value freedom. However, while our strong and core value of freedom is undeniable, it doesn’t represent the whole story regarding the present condition of American culture and also appears to contradict the universal condition of our existence as human beings.

While I am aware that such a perspective is inconvenient and unpopular, at the risk of seeming unpatriotic, I would like to demonstrate my own expression of authentic patriotism by reminding us of something that we often choose to forget—that is, that as free human beings, we exhibit an extremely ambivalent attitude toward our unique capacity for freedom. Although we do indeed love freedom and passionately affirm it, are willing to fight and sacrifice greatly for it, even die for it… we also fear it, hate it, deny and oppress it, are willing to surrender it the moment it becomes too demanding, or exchange it for the illusion of safety and security. Underneath the deafening cry for freedom is a pleading whisper that it be taken from us. Within the gratitude for its many blessings, there is a resentment of its inescapable curses.

The concept of freedom is, of course, essential to the existentialist framework, but we must be mindful of the fact that its leading proponents have understood it to be a highly paradoxical and dialectical dynamic within human experience. Kierkegaard (1844/1980) spoke of anxiety as “the dizziness of freedom,” maintaining that the capacity for and experience of freedom elicits terrifying anxiety. Sartre (1946/2007) proclaimed that as human beings “we are condemned to be free,” emphasizing the burden of responsibility that cannot be separated from freedom. Tillich (1952) expounds “the courage to be,” primarily involving a freedom that is the power of a person’s life but one that he or she also tries to escape and avoid. Citing Dostoevsky’s “Grand Inquisitor,” May (1981) discusses freedom as one of the most prized and dreaded conditions of human existence. Yalom (1980) articulates the frightening experience of “groundlessness” and complete responsibility that are implicit within human freedom.

It is crucial that we remember these interpretations of human freedom from leading figures within our tradition. As existentialists, we are, or should be, the first to affirm and support personal freedom, and yet, as existentialists, we should also be the first to acknowledge and elucidate its inherently conflicted nature. At its core, the nature of freedom is a tension and dynamic struggle between affirming and opposing itself, and suppressing an awareness of the latter tendency is dishonest and misrepresents its true character. Being free means being able to choose—to choose to live as a free person or as a slave or prisoner. The great tragedy of human existence is that all too often we freely choose to live within the restricting confines of our self-created shackles and prison cells.

Although it sounds bizarre the sad truth is that we do in fact create our own prison cells, choose to live in them, and eventually come to love them…we love them more than our freedom, and we will fight to protect and maintain them when they are threatened by the possibility of change and the call of our consciences toward greater freedom. Others and our higher selves unlock the doors of our cells and throw them wide open, but we slam them shut and relock them, for our imprisonment keeps us safe from the anxiety of possibility and the exacting demands of responsibility for choices and decisions. In the end, the only thing worse than being imprisoned or enslaved is being free.

This, however, is not how it has to end. It can be quite challenging to see evidence of the inner conflict and voice concerns amid the roars of fervent crowds and their pseudo-patriotic cheers, but I hope we can agree that if nurturing and actualizing personal freedom is the goal then this goal will not be accomplished through a denial and suppression of the internal resistance toward freedom. We will only support freedom and its fuller actualization to the extent that we honestly acknowledge our conflicted orientation toward it. We are only free to the extent that we understand and directly face our inner drive to not be free. Only in so doing can we truly embrace our freedom and legitimately be called “free people.”