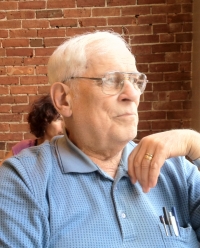 In August 2011, Amedeo Giorgi was interviewed at Saybrook’s graduate conference on themes related to his life’s work in phenomenological psychology. The panel was comprised of four former doctoral students of Giorgi’s at Saybrook: Drs. Lisa K. Mastain, Adrienne Murphy, and Sophia Reinders, and was moderated by Marc Applebaum. This transcript was edited by Amedeo Giorgi and Marc Applebaum. This is part one of three parts.

Murphy: What would you say has been your greatest professional achievement?

Giorgi: I guess I have to say it is the method I developed, and I had to develop a method because my first assignment as a phenomenologist was at Duquesne University. Most of the faculty—or all of the faculty—were clinicians, and there was no researcher. So my background is in psychophysics and natural science psychology, my doctoral dissertation was on vision, my Masters was as well, because when I was a graduate student, over half a century ago, there were no alternatives!

In the 1950’s—humanistic psychology came out in the 1960’s—if you went into psychology, you got natural scientific psychology. I happened to go to a school that had a strong research tradition—there was a clinical program [at my school], but it wasn’t as strong, the prestigious program was the research program, and I went into that program.

And with that background, then, Duquesne University was starting its doctoral program: the idea was it was going to be a program purely from an existential-phenomenological perspective. Adrian Van Kaam, who was the founder of the program—he was Dutch—got exposed to phenomenology in Europe and then emigrated to the US, got his PhD at Case Western Reserve, and the way he put it to me was that he was “shocked” at the state of American psychology, that what was happening, Europe was already integrating a lot of phenomenology, so what he said was that Duquesne University had an undergraduate program but no graduate program, it was open, so he said “Let’s do one thing and do it well, and our perspective is existential phenomenology, and that’s all we’ll do, but for all of psychology, not [just] one field.”

So they needed a researcher and when I met Van Kaam, he asked me—he was taking Maslow’s placed at Brandeis for one semester—and I was working at the time for a consulting firm called Dunlap & Associates in Stamford, Connecticut and I was going to Raytheon at least once a week and Raytheon was near Brandeis in Waltham, and so Van Kaam and I went to dinner one night and that’s where I really heard about phenomenology for the first time—post-PhD, because I didn’t get it at all during my training.

And I remember asking him, “If I become a phenomenologist, will I have to become a clinician?” And he said, “No, no, you can become a researcher.” And he gave me the names of European phenomenological researchers: Buytendijk, and Linschoten, and Carl Graumann in Germany, and so I realized there was a kind of tradition doing research and phenomenology, and then he said to me, “You know you’re really quite lucky you’re in New York, and you should go down to the New School for Social Research because there are a lot of émigrés from Europe who are teaching phenomenology. And so I took courses actually from Rollo May, at that time, he was teaching there, and Paul Tillich was giving a course, and the philosopher Aron Gurwitsch was also there, and so I met these people, and began reading in phenomenology, and the more I read the more I liked.

And I kind of had a professional crisis, because I didn’t believe I could project over the next 25 or 30 years teaching standard psychology. And I didn’t know what to do, because I was trained in this: I couldn’t go into business, I wasn’t a business type, and I was really at a loss when I met Van Kaam—he told me about phenomenology. The more I read, the more I liked. So he invited me to come to Duquesne University to develop a research method that would be compatible with the existential-phenomenological perspective that existed at Duquesne. I started…so I went there, of course I had to develop a method that was general enough, and comprehensive enough, to study any kind of problem. Most of the faculty, most of the students, were clinicians, so I anticipated that many of the problems would be dealing with clinical sorts of problems, so I started to work with the method, trying to develop a method.

Of course when I went there, my knowledge of phenomenology was very limited, very slim, but the big advantage of Duquesne, and I haven’t seen this exist again, was that the philosophy department was existential-phenomenological, there were 10 or 12 existential phenomenologists, so what I did, every semester when I was teaching phenomenology, I also was studying phenomenology. So I was very privileged because I got Husserl from John Scanlon, an excellent phenomenological scholar—I once had a scholar say, “If you have a question about what Husserl would say, ask Scanlon, because he’s just like Husserl!” So I got a really good introduction…I got Merleau-Ponty from John Sallis, who is a very well-known scholar, he’s at Boston College today, and I also got Merleau-Ponty from Al Lingis—Lingis is the translator of Le Visible et L’Invisible, The Visible and the Invisible, that French work…so, high class philosophers teaching philosophy, and I had to translate that into psychology: what are the implications of this philosophy for psychology? What would be valuable for me to carry over here to psychology?

So that was a kind of big effort during those years, and as I said, we also had European visitors…from Europe, and Stephan Strasser came over from Holland, Paul Ricoeur gave a course, Remy Kwant, another Merleau-Ponty scholar, and there was also a summer course, so for 25 years I sat in philosophy courses. And after I knew some of them, I just kept taking them, and I had courses in Kierkegaard, and Gurwitsch, and Scheler, Merleau-Ponty, Heidegger…so I really built up a background. And then the point was: out of all of this background, what’s valuable for psychology? And for me of course, general psychology, not being a clinician, I wanted to know how these ideas could be transported? My primary responsibility was methodology—I had to get a method developed. So I started in the early years—the doctoral program started in 1962—so the first dissertations didn’t come out until about ’67, ’68.

In 1969, I had a sabbatical coming. So I went to Denmark to spend a semester and a summer there, because there was a Copenhagen School of phenomenology—you know, Edgar Rubin was there, you know he is famous for the figure/ground [distinction in psychology], and he was always in competition with David Katz at Rostock. Anyway, this was in ’69, and this is when the student revolts were all taking place. The Copenhagen people said, “you know, we’d love to have you, but there’s absolutely not space, we’re so overcrowded in psychology! But, there’s a brand new department in the University at Aarhus”—it’s a university on the peninsula attached to Germany there—it’s the second largest city—he said, “If you go there, then you can visit with us any time, but it’s a brand new department, with plenty of space.”

So they did invite me, and I spent a year at Aarhus, commuting to Copenhagen. And Rubin had died before I got there…the Chair was a man named Edgar Tranekjaer Rasmussen, and another one, Ib Kristian Moustgaard, and From, these were the three phenomenologists—so I had many conversations with them, learned what the Copenhagen School was about. But the main thing I wanted to do was to track down all of the main European phenomenologists who were doing research: I went to every country in Western Europe, you know—France, England, Germany, Holland, Belgium…every time I would meet [with them] I would ask, “who is doing phenomenological work?” Plus, Van Kaam said to me, when I first went to Duquesne, “In Europe, there are research phenomenologists, and they are using a method.”

Now, I’m trying to develop a method [at that time], but I’m saying, if there’s a method already in existence, why don’t I get a hold of that? Well, every person I went to, not a single one had a method: what phenomenology meant to them was a critique of mainstream psychology, but with no constructive alternative. So after these nine months in Europe, smoking out every phenomenological psychologist that I could find, I’m still empty-handed!

But—I guess maybe it’s part of the American character—I felt, well, do something about it! If you don’t see what you want, create something! So I developed a method, I came back, and I said, “Well, I’m going to develop a phenomenological method.” And I introduced a new course [at Duquesne] called Phenomenological Method, there were about eight students in the seminar, and I said, “I don’t know what I’m going to teach you [laughter], I know that I read Husserl, who said you have to describe, you have to go back to description.” So that semester—it was 1970—was the first time I taught the method, and of course over each semester I kept repeating it, and I modified it, and I kept the course going.

And I would say developing a method where there was a vacuum probably is the biggest thing, and probably I would almost say “too big,” because it has dominated my life [laughter]. I didn’t mean for method to take such a role in my life—people heard there was this method, and they wanted me to teach a workshop, or go and teach. And my idea was to meet…the task: Duquesne wanted me to go there and develop a method, OK, I wanted to satisfy that criterion, but then I wanted to go on to write books about phenomenological psychology itself. So, after 50 years of doing method, I’m tired! I want to get on to a book on Merleau-Ponty, a book on Husserl, where I get into the substance of phenomenological psychology, not just the method. It has been a good thing, but also a distraction, in the sense that I couldn’t let go of method, that’s where everybody was pulling me, toward the method. So I hope at this old age to write books on substantive phenomenological psychology, what that means and why that would be important for psychology. So that’s a long answer to your question, I wanted to give you some context why I thought that method was so important.

Part 2 of 3 will appear tomorrow.