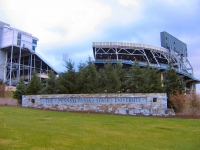 Living in Philadelphia in recent months, I have been listening to news about two scandals—one involving a Monsignor of the Catholic Church accused of covering up sexual abuse committed by a priest, and the scandal that broke last Fall involving a football coach at Penn State University accused of molesting young boys.

Both trials occurred during the same time; both verdicts were reported the same day. In Philadelphia, a jury convicted Monsignor William Lynn of the Archdiocese of Philadelphia guilty on one count of endangering the welfare of a child. Lynn is the first senior U.S. Roman Catholic Church official to be convicted for covering up child sex abuse. In Bellefonte, Pa., a jury found Jerry Sandusky guilty of 45 of 48 abuse charges.

My focus is not on why individuals commit sexual crimes against children but on individuals and institutions who decide to cover them up. In the case of Penn State, the grand jury painted a picture of an institutional culture that would look the other way to protect the school’s reputation. As a result, Sandusky’s list of alleged victims continued to grow. The same thing can be said of the Catholic Church. For years, individuals in the church have looked the other way to protect the church’s reputation, power, and finances, which enabled some priests to continue to abuse children.

Because I do not place ultimate authority in any institution, religious or secular, I find it difficult to understand how people can participate in cover ups that enable crimes to continue. I discussed the case of Monsignor Lynn with two former Catholics—both agreed the priest was wrong to cover up the abuse. One, however, said what bothered her about the court’s “guilty” decision was the Monsignor “had taken a vow of obedience.”

By vowing “obedience,” a priest signifies his willingness to let God act through him and accepts the structure of the Catholic Church. He agrees to follow the decrees of his superiors, including the bishop, cardinals and the pope. I wondered, would any true Existentialist take a vow of obedience?

I became interested in what light Existentialism could shed on this issue. I looked up “evil” in books I have about Existentialism and found little. Then I came across Hannah Arendt.

Hannah Arendt was born into a family of secular German Jews and studied philosophy with Martin Heidegger at the University of Marburg. She had a romantic relationship with Heidegger, for which she was later criticized because he supported the Nazi party. She wrote her dissertation under the existentialist philosopher-psychologist Karl Jaspers. Because she was Jewish, she was prevented from teaching in German universities. She researched anti-Semitism, was interrogated by the Gestapo, and then fled Germany for Paris. While in France, Arendt worked to support Jewish Refugees, was imprisoned in a camp she managed to escape, and later fled to the United States—through illegal visas issued by American diplomat Hiram Bingham IV, who aided 2,500 other Jewish refugees in the same way.

Arendt reported the Eichmann trial for The New Yorker, which later evolved into her book, Eichmann in Jerusalem. Arendt was critical of the way the trial was conducted in Israel and of the way some Jewish leaders acted during the Holocaust. This caused animosity toward Arendt in the Jewish community. While Eichmann was portrayed at his trial as a genocidal monster who wanted to eliminate every Jew, Arendt saw him as essentially a bureaucrat, an ordinary man, who just wanted to please his superiors.

Arendt introduced the phrase, “the banality of evil” to describe him. In this statement, she questioned if evil is radical or simply a function of thoughtlessness—a tendency of ordinary people to obey orders and to conform to mass opinion without a critical evaluation of the consequences of their actions or inaction. Could Arendt’s “banality of evil” describe Monsignor Lynn and Joe Paterno, Penn State’s legendary and once-revered football coach, who many thought could have done more to protect children? Neither Lynn nor Paterno would be described as “evil monsters.” A reporter for The Philadelphia Inquirer started an article about Lynn with, “The Father Lynn I knew was no monster. I actually liked him.” When he took the witness stand to defend himself, Lynn said his seminary classmates called him “naïve” for believing the will of God flowed through bishops. According to the article, Lynn was bitter because he felt “he had been hung out to dry by prosecutors needing a villain and a church hierarchy he spent his life serving.”

Tenets of Existentialism call for us to use our freedom, form our own values, and act authentically. Acting with authenticity means acting responsibly by following values we have formed, rather than caving to social norms, institutional pressures, or how we “should act.” During World War II, Sartre and de Beauvoir were active members of the resistance movement. They acted authentically. Hiram Bingham IV acted authentically when he broke laws that enabled 2,500 Jews to escape. In my opinion, some officials of the Catholic Church and Penn State acted inauthentically. It is difficult to know what any of us would do under extreme pressure. I hope I would act authentically.

In his book Existentialism and Humanism, Sartre defines “anguish” as the emotion we feel when we realize we are responsible not just for ourselves, but for others. I wish the Catholic Church and Penn State had felt “anguish” in the existential sense and been more “humanistic.” Sartre would charge some individuals in these institutions with “bad faith”—refusing to acknowledge their responsibility on the grounds they were just “following orders.”

The Catholic Church lists “charity,” meaning loving kindness toward all others, as part of its mission; Penn State includes “to improve the well-being and health of individuals” in its mission. It is tragically ironic these institutions did not do more to protect the youth they served.

Arendt distinguishes between daily transgressions that can be resolved through punishment or forgiveness, and offenses where all we can say is, “This should never have happened.” The child sexual abuse that occurred in the Catholic Church and at Penn State never should have happened.