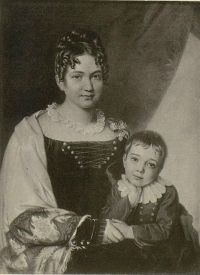 Existential therapists prefer to talk about the here-and-now and the future, and often avoid the past. This can be a mistake. In part, this is rooted in a corrective to approaches to psychology excessively focused on the past. A holistic psychology must equally value the past, the present, and the future as these are all part of who we are. I wanted to take a couple of blogs to speak to this in my own life, through speaking about the existential lessons I learned from my parents.

About Lynn Hoffman
My mother grew up in Cape Girardeau, Missouri. Her family struggled financially, often fishing and hunting as much to provide food as for enjoyment. She and her parents worked hard for her to be able to attend college and become a teacher. Her pay at her first job was not a livable wage, but she persisted because she believed in it. A few years later this school closed. Several years later, she and a friend began Noah’s Art preschool in the old Sunday School building of the church we attended. She returned to school earning a Masters in early childhood education, which has been utilized mostly as a being a grandparent to her own grandchildren as well as many other children near where she lives. Throughout her life, she has always remained highly dedicated to volunteering at her church, even when not always recognized for her hard work and contributions.

Facing Death
Many times I have been struck my mother’s compassion for the dying. I first remember this when the pastor’s wife at the church I grew up in became very ill and eventually died. My mother volunteered to be very active in caring for her and organizing others to help with her care. This was more than just caretaking; my mother approached death with an openness to learning from it and to allowing it to deepen relationships. As I listened to her stories of caring for Ang, I was touched and at the same time frightened. At this time in my life, I knew very little of death and these stories brought death closer to me, even though I was not yet ready for the lessons. Yet, I still observed that this changed my mother, and I was certain that it also was transformative to our pastor and his wife.

The most evident lesson about existential psychology that I learned from my mother was regarding death. The United States, as well as many cultures around the world, seem to be avoiding death and the dying. Many therapists avoid grief work and work even harder to avoid working with people who are dying. Maybe the greatest example of our intolerance of death and grieving are the attempts to pathologize it, such as the DSM-5’s consideration of shortening the period that could be considered normal grieving. Existential psychology, conversely, appears to be much more open to approaching death directly.

Facing Conflict
I often say that my brother is my best friend, but it was not always true. When growing up, John and I often did not get along very well. When we would fight, my mother would send us to our rooms and tell us that we could not leave until we worked it out on our own. As John and I were both very stubborn (still can be), we often stayed in the room for a long time before we left. When we finally left, we had to tell mom how we worked it out. My mother does not like to take credit for this as wisdom, but I believe this is exactly what it was.

My nature is to avoid conflict. I can feel this deep within my body. Yet, over the years, I have been able to overcome this and find the courage to face conflict directly and confidently. I believe much of this began with the lessons I learned with my brother from my mother’s discipline. It took many years for me to implement beyond family, and I still often dread conflict, yet I have the courage to deal with it directly. I am sure there are others through the years that wish I had not learned this lesson, yet I am very thankful for it.

Compassion
When growing up, my mother always seemed to have a compassionate project—actually several—that she was committed to. These ranged from commitments to wildlife causes, such as saving the wolves, to friendships and relationships in our local community. No matter what was going on in my mother’s life, she seemed to always need an outlet for her compassionate side.

My mother often did not speak much about her compassion projects, but in many ways this made them a more powerful witness. These just seemed to flow from her. As I grew older, I found myself with a strong desire to nurture and maintain my own compassionate side and have come to see compassion, along with love, as one of my deepest core values. I know that this compassion began with my mother.

Service and Diversity
I still have vivid memories of watching as other people were credited for work that I knew my mother had done, often because she was a woman. She gave so much of her life in service, yet often was not recognized. Although she did not do the work for recognition, I knew that this hurt, as it is only human. Yet, she never wavered in her commitment to serving. My mother deeply believed in the causes she was committed to and preserved for the meaning of this service.

My observations of my mother’s service had two powerful impacts upon me. First, it inspired me to a deep commitment to work serving others. Second, it was one of my first lessons on diversity, which has been a strong focus of my personal and professional life. I watched many times where women, including my mother, were not given credit for their work and had their experience discredited. My interest in diversity began through watching what I viewed as mistreatment of women. It was not the more obvious forms of mistreatment, such as domestic violence, but it was evident to me that what I observed was wrong. This lesson began a lifelong commitment to diversity for me.

Conclusion
It is easy to forget where we have learned some of the lessons that influence us in our lives, including the lessons we learn from our parents. I have often thought that it was unlikely for a rural Midwest boy to grow up and become an existential psychologist. But when I look at the lessons I learned from my mother, it begins to make sense. The seeds were being sown.