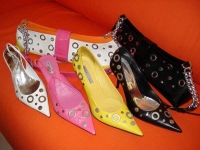 I want to share with you a beautiful story of sacrifice that is representative of the sacrifice that many endure here in Asia in order to enter into our profession. The lady shared this story in a short introduction she gave of herself during one of my workshops. Her name is Daisy.

Daisy had been thinking for a while about leaving her job as a headhunter and becoming a full time counselor. She shared a story of entering the office of a very accomplished female executive who was making a very comfortable living. She made more money than she had time to spend. Upon being ushered into the plush office, the executive was excited to show Daisy what was in her file cabinets.

Anticipating the tools of the executive’s craft, Daisy expected to see volumes and volumes of books or top-secret files. Instead, a vault of expensive high end fashion shoes were presented to Daisy. The executive did not enjoy her work and said to Daisy, “why would I store artifacts of my work here when I can be surrounded with beautiful things that I truly love. Daisy was shocked and felt a lot of pity for this executive. The executive was immensely successful but equally unhappy. At the same time, Daisy saw the emptiness of her current pursuit as a successful headhunter. She vowed to herself that she would never allow herself to become like this executive.

During the same year, Daisy’s grandmother also passed away. Her grandmother was a paragon of self-sacrifice. The grandmother did not allow herself to live for herself. Daisy felt very appreciative of her grandmother but also felt very sad for a life unlived. Daisy told herself that she must not forget herself in the midst of serving others.

Finally, Daisy resolved to take an intervening step and backpack through India on her own. Daisy spoke fluent English but not all of the people that she encountered in India did. Daisy discovered that many of the things that she “needed” to live were illusions and that she can truly wander and depend on herself and live on very little. Daisy then came upon a shaman who told her, “you are ready to embark upon what you were hoping to do.” This was the final confirmation for Daisy.

She returned to China after her trip and promptly tendered her resignation. She is now earning one-tenth of her previous salary and living the simple life. She rediscovered the joy of the simplicity. The final beautiful piece of the puzzle was that Daisy, being a successful and accomplished woman had dated frequently but never found Mr. Right. She came to the workshop six months pregnant with her first child, the result of a recent marriage.