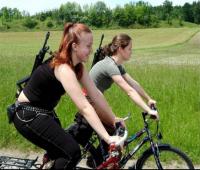 Last Friday, it was impossible to tune in into any news station and not be completely drawn into the details surrounding the massacre in Aurora, Colorado. A gunman had killed 12 people and wounded 58 others at the midnight premiere of the latest Batman movie installment.

Pundits, politicians, and the rest of us immediately after learning about the firepower the gunman in Aurora carried, all legally acquired, started to inquire whether we should do something about gun control (again). It seems that this conversation gets started every time we have a major incident involving guns. The last one involved the shooting of Congresswoman Gabby Giffords where six people died in January 2011. Soon after this shooting, we did talk about gun control, but nothing of consequence came out of it.

Looking at the Gallup poll regarding the percentage of people in the U.S. wanting stricter gun regulations, it has decreased from 78 percent in 1990 to 44 percent in 2010. In the same poll, the number of citizens that would support a complete ban of firearms is only 29 percent. Incidentally, it was in the 1990s when the U.S. Congress passed the Brady Handgun Violence Prevention Act and the Violent Crime Control and Law Enforcement Act—the first act called for national gun registration and a waiting period; the latter one limited the kind of weapons ordinary citizens could buy.

Americans that hold the line against stricter gun regulations, or the majority according to the statistics cited above, argue for the second amendment and the potential loss of freedom. The text approved by Congress for the second amendment states: “A well regulated militia being necessary to the security of a free state, the right of the people to keep and bear arms shall not be infringed.” There is no question that the U.S. and many other countries obtained their sovereignty through a militia. For the U.S., it was very important in the 1700s to ensure that ordinary citizens could keep and bear arms. Fast forwarding to the present, we find ourselves having the most well-armed and powerful military in the world. Any kind of civilian militia in modern times would be out of the question, just ask the Branch Davidians in Waco, Texas.

So we have a Bill of Rights that was necessary to enable a military and political force to ensure that all citizens could participate in a necessary revolution and defend the new republic. I do not believe that the founders of this republic had in mind that a gunman should be able to legally buy an assault rifle, along with 6,000 rounds of ammunition and 100-round drum clips capable of discharging in one minute against innocent and ordinary fellow citizens.

The other argument about gun control is the loss of freedom. In this case, it is about the freedom of the gun owner to have any kind and number of weapons and all of the desired ammunition to go along with them. Looking at freedom systemically, there is also the freedom of going to the premier of the new Batman movie and not worrying about being killed because a gunman who exercised the right to buy an arsenal decided to use it against moviegoers.

What freedom is more relevant? We answered this question multiple times throughout the 2000s. Starting with the major terrorist attack in 2001 and followed by the shoe bomber and later the underwear bomber. We accepted the loss of freedom at airports where we now have to undress, be inspected by X-ray machines, and limit our liquid carry-ons to three ounces. We did not express any outrage when the government almost instantly eliminated the freedom we enjoyed of picking up our relatives directly at the gate and not needing much time to board a plane, let alone having to go through strict security procedures that border on the intrusive. We accepted these regulations because we were scared of terrorists and we wanted to make our flights safe. How about making our visits to our favorite congresswoman and our movie-going experience also safe? Are we willing to give up some freedom to make our environments safe from the lethal actions of sane or insane gunmen? California limits clips for all rifles to 10 bullets. The gunman in Aurora was able to buy one that carries 100 bullets. What is the value of freedom we place on the number of bullets one clip can carry? How many bullets does it take to kill a deer or defend our family in our homes?

Let’s look at Switzerland as an analog. This country does not have a formal army; it has a militia. You could say that their military is what we had back in the 1700s. The Swiss embody our second amendment. Men are required to serve in the Swiss militia and are issued assault rifles to keep at home. It was only in 2007 that ammunition was no longer issued to members of the militia to keep at home and was instead kept in a central location. Switzerland is a country with a deep relationship with guns. From a social systems perspective, citizens are expected to learn how to use guns, keep them in their possession and act responsibly with them. A country of almost eight million people, Switzerland only experiences a handful of gun related deaths each year (less than 100), with most being suicides.

The analog with Switzerland is that their culture is deeply connected with guns as is the U.S. culture; however, the dynamics and the lethal consequences of gun ownership are much different. The Swiss do not see having a gun as a right, but as a duty. They see it as part of their national responsibility while in the militia. Although Switzerland hosts some of the largest gun competitions in the world, gun violence is among the lowest in the world. So what is different?

Two things standout: community and a large middle class. The Swiss live in tight communities where families and friends live together and provide support across generations. People are not geographically dispersed and disconnected from their community as they are in the U.S. Switzerland’s GDP per capita ranks eighth in the world just below the U.S., which ranks at number six. However, the wealthy and middle classes in that country account for 80 percent of their population in contrast to less than 50 percent for the same economic groups in the U.S. Does the sense of community and wealth have something to do with responsible gun use? Does the community-oriented and dutiful relationship with guns change the perspective of the use of these weapons?

I think there is a lot to learn from other systems and their relationship with guns. The answer is not as simple as stricter gun controls. Community and economic well-being seem to be important variables in how we relate to guns and in what we do and not do with them.