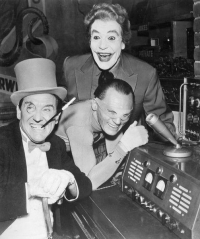 Are we addicted to evil?

That’s the provocative question asked by Stephen Metcalf in an article for Slate.com.

By piecing together the etymology of the work “amok” (as in, “he ran amok”), examining the scripted quality of media coverage of spree violence like the shootings in Aurora, and looking at the difference between the Batman movies’ bland heroes and colorful, personality-filled, villains, Metcalf comes to a depressing conclusion:

The only way to truly end the violence of these inevitably male “pseudocommandos” is to “divest evil of its grandiosity or mythic resonance by completely banalizing it.”  Which we could do if we wanted – but we don’t.

The problem is that as the world has gotten increasingly complicated and harder to make our way through; as we find ourselves more and more at the mercy of abstract institutions that cannot be effectively reasoned with or protested against; as our individual humanity seems to be smaller and less meaningful every day … evil becomes more and more alluring because someone who goes on a rampage is at least relevant.

Maybe we would never shoot up a school or a movie theater ourselves, but we would still go to a movie because of an incredible performance by an Oscar-caliber actor who plays a charming-yet-violent psychopath.  Maybe we’d tell our friends how compelling that performance is.

Forget Heath Ledger’s Joker:  even the hero of the story, the Batman, is kind of an anti-social psychopath.  Western culture has always had anti-heroes – Milton’s Satan was written up long before there were movie treatments – but at some point in the 20th century the anti-hero became the only kind of socially acceptable, or at least socially interesting, heroes.  The only kind many of us will believe in.

That’s because we don’t know how to be heroes in the modern world.  Absent a burning building to rush into, absent a billion dollars with which to play political king maker, how do we follow the human urge to be significant – to occasionally enlarge ourselves to the point where we’re larger than life – in a way that is also good for our communities?

All too often, we don’t know how.  The only impulses that seem to offer the chance for significance are anti-social.

Hence our addiction to evil – a problem that won’t go away without a deliberate choice.  This means that finding new ways for individuals to connect with the primal, the awe inspiring, the heroic, is a crucial project.

The work of Kirk Schneider on awe-based psychology (PDF), and Dana Klisanin on the 21st century “cyber-hero” archetype, along with many of their peers and colleagues, may be the most effective response to violence that is, at heart, evil for the sake of significance.
— Benjamin Wachs