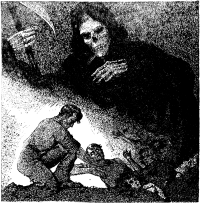 I am afraid of death. It is the nothingness that makes me tremble. Despite my intense efforts to work, love, and play; to create fulfillment in my life, it will most certainly end. As you might imagine, I’m not a fan of “goodbyes” either.

When I began contemplating dissertation topics, I was compelled to wrestle with similar sources of fear. Death anxiety, as I’ve begun to describe, is not quite the fear of dying, but of the impending nothingness that follows our death. It impacts each of us, some more consciously than others (Becker, 1973). My other closely related fear was ending relationships. In my clinical work, the most relevantly feared ending was a forced termination. Forced termination is the premature conclusion of treatment that is uncharacteristically based on the clinician’s needs (in my case, the training needs of the student clinician), as opposed to the patient’s. To create the most applicable outcomes, I focused on individual, psychodynamic, and open-ended types of treatments by student clinicians in training. In all truthfulness, a part of me considered whether I could conquer, or at least make less painful, the limits of relationships and life. Maybe I could defeat these fears with knowledge. We know it does not work this way, but perhaps I helped in making sense out of something that plagues us all with fear—endings.

My research during the past two years has revolved around two theories that aim to make sense of death anxiety and its impact on the human condition. Terror Management Theory, or TMT, (Pyszczynski, Solomon, & Greenberg, 1986) and Robert Firestone’s Separation Theory (1984, 1987, 1993) developed independently from one another, but both explain the interplay between death thoughts, death terror, and the modes by which such fears are mitigated. In particular, these theories offer evidence for the relationship between death and close relationships.

Two studies (Mikulincer, Florian, Birnbaum, & Malishkevich, 2002; Mikulincer, Florian, & Hirschberger, 2003) demonstrate that attachment serves as the primary psychological mitigator of death concerns. When our most valuable relationships are threatened, thoughts of our own death increase. In an effort to deny the onslaught of mortality concerns, people rush to defend and maintain the threatened relationship or use a past object relationship (transference) in order to repress death anxiety. This fantasized relationship from the past, used during mortality salient situations—a situation which increases awareness of our mortality— is called the “fantasy bond.”

The fantasy bond (Firestone, 1984) develops during the mother-infant bonding and is the infant’s defense against separation anxiety. In order to account for those times when the mother is absent, the infant creates an imagined image to replace his mother, as the infant’s psychological existence is necessarily bound with the mother’s. This fantasy bond is the child’s first mode of defense against separation anxiety, so it becomes the primary mode when the child, about the age of five, surmises that she too is a mortal being. From then on, when the thought of death terrorizes her conscious mind, she brings back her fantasized mother—thereby relating to the world in a way that continues to mitigate his fear of separation/eradication.

So, what does this have to do with forced termination?

First, the long-term therapeutic relationship constitutes a close relationship. The intimacy of the relationship between clinician and patient is paramount to the treatment outcome, and confidence in one’s clinician is dependent on a level of security and trust—trust that is inevitably broken during forced termination (Schlesinger, 2005).

Secondly, the forced termination phase of treatment is defined by the same denial-based and regressive defensives that are found in those whose transference relationship is being used to mitigate death fears. The patient, as well as the student-clinician, typically engage in a flight from the authentic relationship. They use their fantasy bonds, in what Firestone (1993) terms the Couple Bond. The patient will often show up late, “run out of things to talk about,” or plan a vacation around the remaining sessions. Overcome by feelings of guilt, the typically insecure student clinician often becomes focused on the transfer of their patient to the next clinician. They will prepare for their next clinical placement and unquestionably soak up the common praises by the patient, who has soared into health.

Given the joining of death anxiety and forced termination literature, I leave it to the student clinician to decide how they can use death anxiety to conceptualize treatment during the final phase of treatment. I have come to believe, however, that treatment that end in forced termination are salvaged by dealing with the here-and-now of a mortality salient situation. In the same way that awareness of our own death, dialed in to just the right degree, gives precedence to the discovery or creation of life’s meaning, so too can the death of treatment press the therapeutic dyad toward discovering the substance of their relationship and the essence of the patient’s life. Rather than be a time to recap the year, fantasize about the future, or become consumed with the next phase of life, forced termination has the potential to become a most significant moment in treatment—when endings may elucidate purpose.

After two years of study, I’m no less fearful of death, but am evermore pressed to make the most out of living.

Schlesinger, H. J. (2005). Endings and beginnings: On the technique of terminating psychotherapy and psychoanalysis. Mahwah, NJ, US: Analytic Press.

Today’s guest contributor, Lee Vance is a doctoral candidate in clinical psychology (Psy.D) at the Wright Institute in Berkeley, CA.