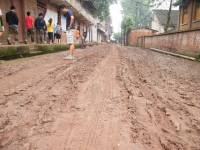 走前面的人走过的路！
I took the road less traveled, and it made all the difference. – Robert Frost

At the 2nd International Conference on Existential Psychology held in Shanghai in May, Xuefu Wang presented a keynote address on Lu Xun and the Iron House, providing a quick glimpse into an indigenous Chinese model of existential psychology and psychotherapy he had been developing.

I grew up in the late 1990s and early 2000s. It was a time when those from the East were flocking to the West for economic opportunities and those from the West flocked to the East in search of post-modern truth, disappointed by the unfulfilled promises of the Modernist movement to make the world a better place for all.

I would hesitate to call myself a cross-cultural person, but with this unique upbringing at the crossroads of East and West caused me to relate to Xuefu’s keynote in a special way.

走前面的人走过的路！Follow the steps of those in front of you!

On a wet and rainy day in Sichuan two years ago, I was with some students on a volunteer project in a rural school. The rain had caused the topsoil on the rural road to turn into a wet clay and slippery mush. Unfamiliar with such terrain and ill-equipped to make our way to the dining house a mere 200 meters away, we were struggling gingerly when we heard a local kid call out from behind:

走前面的人走过的路! (follow the steps of those in front of you!)

The wisdom of experience! It turned out that whenever a step was taken, the clay topsoil on the road would be pushed to the side of shoe by the pressure of the footstep, revealing the harder layer of soil below, thus leaving a grip for those who followed after that, provided one followed carefully in those steps.

Yet, this also meant that there had to be one person who would take the lead to open a path for others. A brave one, who had to risk slipping, falling, and perhaps dirtying himself or breaking a bone.

Having grown up in a Mandarin-speaking home, Lu Xun was not an unfamiliar figure. In fact, I recall that our family had a bust of Lu Xun in a display cabinet when I was growing up. And having been trained in models of psychotherapy that originated in the West, I had grown accustomed to hearing psychological terms such as “executive function,” “yearnings,” or “self-esteem” at professional meetings.

Hearing Xuefu’s presentation in Mandarin, I found my heart leaping to lap up every word pronounced. The Chinese part of me connected deeply with the wisdom he shared, resonating within me with a special warmth. While I believe concepts such as “yearnings” or “self-esteem” hold meaning universally, it is different for one to hear terms in one’s native language. It was like every word exploded within me in the myriad of meanings, experiences and connections I had with my own life and my professional life.

In an ironic way, I realized that it was the more “Western” part of me that enabled the deep appreciation of Xuefu’s ideas. In a professional and personal world dominated by the language of science and rationalism, the wisdom of Chinese thinkers such as Lu Xun, gleaned by observing the world around them and searching deep within their hearts for a congruent response towards the human condition, was like finding an oasis in the desert. I found that wisdom in a world drowning in mere knowledge was a life-saving float, calling me to hold on to it to find my way home.

In developing his indigenous model of Zhi Mian psychology, Xuefu stood on the shoulders of giants who had gone before him; although there is little doubt that he is a giant himself in his understanding of the Chinese psyche. In that way, Xuefu had attempted to traverse the slippery path of finding a way to introducing psychology and therapy to his people by following in the steps of those who had gone before him. He found clues from those who had faced the“givens” of existence long before we ourselves existed to face these givens ourselves.

Paradoxically, in doing this, Xuefu was also taking a path less traveled. In traditional cultures, people have often relied on spiritual leaders, writers, philosophers, and artists for healing; even more poignantly so in the Chinese culture.

Their wisdom opened possibilities for their people to negotiate the tragedies of existence and construct meanings of their experiences. This wisdom connected easily to people because the healers were not aloof from the tragedies of existence afflicting the afflicted. Healing today takes place in different places—more in the hospitals, in the wards, and in the courtrooms, and less in the spiritual places of worship, a dinner table, or a private study room.

In trying to bring psychology and therapy to a country relatively new to such ideas, it would have been easier to adopt Western schools of psychological thought wholesale and expect clients in therapy to align themselves to concepts and terms often alien to them. It would not have been difficult to find clients for this endeavor given the modern thirst for anything that promises everything to soothe our minds and our hearts.

The path less traveled would mean not just translating terms and jargon into Chinese (at the risk of losing nuanced meanings and sounding clumsy), but to find a way to integrate and construct a system of meaning which would speak to the heart of the Chinese client.

The Chinese language, and the mind of anyone who speaks it, is full of imagery, parables, and metaphors, each one carrying with it a collective meaning that any Chinese person would know with little need for explanation. Developing an indigenous Chinese model of psychology would mean building brick by brick the structures of meaning, finding the necessary terms, metaphors, idioms, and parables that any Chinese person would relate to with little need for explanation. This structure could then be a vehicle to smooth the process of therapy rather than becoming speed bumps. Most importantly, it seems like Xuefu has found a crucial term ‘直面‘ (Zhi-Mian—to face directly) that any Chinese person can understand in the blinking of an eye.

In a time in which psychologists, counselors and mental health workers routinely seek to force diagnoses and labels onto clients, Existential-Humanistic Psychology seems uniquely positioned to help develop ideas tailored to speak to those from different cultures. Its openness and respect for the wisdom of cultures, philosophies, and faith traditions opens itself up to as-of-yet uncharted possibilities.

And even more poignantly, Lu Xun himself speaks to this: ‘For actually the earth had no roads to begin with, but when many men pass one way, a road is made.’ (其实地上本没有路，走的人多了，便成了路.)

For the future of Existential Psychology, may there be many more such men and women.

Today’s guest contributor, Zheng Liren, is a social worker and guidance counselor from Singapore, who stumbled upon Existential Psychology after picking up an Irvin Yalom and a Viktor Frankl book in a local library and hasn’t been able to put down existential writings since then.