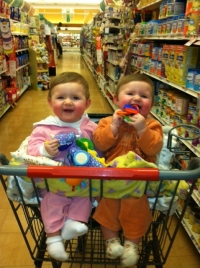 I have always defined myself as an existentialist. As a parent, this meant I was responsible for providing opportunities for my children so they could develop into unique individuals. I watched as they created their respective identities through the authentic (fortunately, more authentic than inauthentic) choices they made. It was easy to see my two children as individuals—my first child is a girl; my second child, a boy, was born four years later. My duty to be a “good existentialist parent” was relatively easy. Because my children were and are so different, I had no choice but to see them as individuals.

As a grandmother, I prided myself on being a “good existential grandparent” because I saw each grandchild as unique. I have not compared—each was special in his or her own way. I watched as each grandchild created his or her individual “essence.”

And then the twins arrived. Identical twins—named Hattie Christina and Mae Jacqueline for their grandmothers. The first challenge was to know which one was which. When they were newborns, they had Baby A and Baby B on their knitted caps. My daughter-in-law, Keri, painted Hattie’s toe nail pink so she could be sure which baby she had fed. As they matured, we could see subtle differences in appearance and their personalities. Keri could always tell them apart. There were times when my son would refer to them as “this one” and “that one.” I could usually tell them apart after I had spent some time with them but only when they were side-by-side.

I was impressed that my granddaughter Charlie, Hattie and Mae’s older sister, could almost always tell which baby was which. I finally found out she could tell the difference because Mae was dressed in outfits that had flowers on them (as in April showers bring May flowers). On one occasion, I caused considerable confusion when I made the mistake of dressing Hattie in flowers.

I realized early on that if I called out “Hattie” or “Mae” they both would look at me and respond. Wanting to encourage in each granddaughter a sense of her own individuality, I knelt in front of Hattie and chanted, “Hattie, Hattie, Hattie!” Then with the other (an interesting existential term in this context) I repeated, “Mae, Mae, Mae.” To my horror, I learned I had confused the two and were teaching them the name of “the other!”

Again, not wanting to compare, I noticed that Hattie crawled first. Mae “clucked” (that little noise very talented babies make with their tongue), pointed, and gave “High Fives” more readily than Hattie. I asked, “What does Hattie do?” (Not wanting the baby named after me to be outdone by her sister!) Keri informed me, “Hattie doesn’t have to do anything—Hattie crawls!”

As Hattie and Mae mature, they are now more than a year old, I notice a few more differences each time I see them. I continue to ponder existential questions such as does the position “existence precedes essence” apply to them as much as other individuals who are not identical twins? I have concluded that yes, this tenet of existentialism applies to them. Even though once, before the egg split, they were the same being and have identical DNA, they will create their unique identities through the actions and choices they make and have already started to do so. As to the “Nature vs. Nurture” debate, I have decided both factors play an important role—as they do in any individual’s development.

Fortunately, Hattie and Mae have flexible parents who love them and have great senses of humor. Perhaps this is why they laugh so readily. They have an older brother, Will, who sings to them when they cry, and their older sister, Charlie, who plays with them. And, they have grandparents who look at them with awe and wonder—a feeling I think most grandparents share. But looking at two darling grandchildren born within seconds of each other is what a dear friend would say is, “beyond the beyond.”

As for feeling “dehumanized” or “objectified” when they gaze at one another, at this stage of their development, I am not sure Hattie and Mae have a sense of their individuality or “the Other”—or where one begins and the other ends. As they mature, I hope they will view each other as unique women—who have created their individual identities. I also hope they will see “the Other” as a special friend—one who has been there from the very beginning!