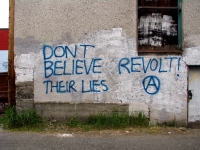 Unless you have been living under a rock during the last two weeks or live in a country that does not find U.S. news an addictively bad soap opera, you are well-aware of the political battle regarding “facts” and “truth.”

In a New York Times op-ed piece last week, Charles Blow said, “Honesty is a lost art. Facts are for losers. The truth is dead. Pick one.”

Despite my existential belief in subjective reality, I am having a really hard time with this. I still believe in the virtue of honesty, and I do believe striving for truth in all one’s affairs is an admirable goal.

But the whole world seems to have accepted as the definition of truth what Stephen Colbert defined as “truthiness” in the very first episode of his show, The Colbert Report, in which his character satirizes conservative pundits and ideologues. Truthiness, he said, was when you feel “in your gut” that something is true and right, regardless of facts or figures, especially those to the contrary.

Recent research out of New Zealand has shown some truth to this truthiness effect. In one experiment, cognitive researchers there showed participants a list of names, some with pictures and some without, and asked them which of these people were alive and which were dead. The results showed that if the name appeared with a picture, most people judged them alive, even if that person was dead. If the name appeared without a picture, most people judged them dead, even if they were alive.

In the second experiment, the researchers showed the participants a series of general “claims,” again with some accompanied by a picture and some not. If it appeared with a picture, a claim such as “The liquid in thermometers is magnesium” would be judged true, while those claims without a picture were judged false.

Politicians are not the only ones who are using looser and looser definitions of truth, fact, and honesty. Plagiarism is running rampant—not only among students, such as the recent scandal at Harvard, but among even well-known journalists, including Fareed Zakaria of Time Magazine and CNN.

While the word “authenticity” is often tossed around in existential circles, most of the time it is not equated with truth or honesty, or indeed any sort of existential “ethic.” However, Ortega (2005) describes Heidegger’s idea of a “call to conscience,” or Gewissensruf related to authenticity as Eigentlichkeit and resoluteness as Entschlossenheit. Ortega says Dasein can understand this call of conscience through awareness of the idea of Being-guilty, and that this can form the basis for an existential concept of ethics. She quotes Heidegger from Being and Time:

However, in most of the cases cited above, this sense of “Being-guilty” is completely absent. In an article in the Columbia Journalism Review notes that many students who have been caught show a distinct lack of remorse—mostly because they don’t see it as a bad thing—unless, of course, one gets caught. The author of the CJR article, Kristal Brent Zook, recounts the following story in the article:

“Are you understanding the meaning of plagiarism?” I asked one offender who’d appeared before a committee to make an appeal. It had been explained to her in writing that she plagiarized by reprinting passages verbatim, without attribution, from press releases and government publications.

“I mean, the word plagiarism to me is a hurtful word,” she answered finally. What she’d done hadn’t been “malicious,” she said. To her mind, there could be no wrongdoing without intent. “I guess I should have properly attributed,” she finally conceded, reluctantly, and not at all convincingly in the committee’s view. It’s unlikely that the student will be allowed to return to the university.

The article also discusses the story of another student, who wrote a very remorse-sounding letter to the disciplinary committee, and was then given a second chance. This student squandered that second chance by submitting the same plagiarized essay to a different instructor (Zook, 2012). In neither case is there any real sense of Heidegger’s idea of “Being-guilty.”

So, what’s the answer? How we do we help to restore a sense of responsibility—a desire to follow a call of care. Ortega (2005) suggests:

But if rational considerations or psychological states do not serve as sufficient motivation as the call to conscience—and clearly in the cases of the politicians and students it is not—how can we expect authentic connections between humans to work.

It would require a radical shift in thought—from a culture of self-interest to a culture of altruism and compassion and care.

One can only hope—but I have to say, I’m not holding my breath.

Zook, K. B. (2012, July 16). Do they get that it’s wrong? Journalism students can be “truly baffled” when confronted for plagiarism. Columbia Journalism Review [online edition].