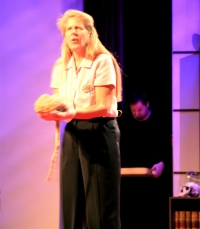 Where does inspiration come from?

Sometimes I find myself trolling through books and articles, looking for a line or a thought that inspires me to action, whether that action is writing or performing a difficult task or simply getting up in the morning. But it is rare that in the act of actively “looking” for inspiration through words that I actually find it.

While thinking about this topic, I found a webpage that I had saved detailing “21 Ways” to find inspiration. Some of the suggestions include observing nature, pets, children, and the cosmos. But I read those suggestions, look at the beautiful pictures accompanying them, and still do not feel inspired.

While watching some highlights from the Democratic National Convention, I did see something inspiring—former Representative Gabrielle Giffords reciting the Pledge of Allegiance in front of the crowd as part of her recovery from being shot in the brain. As she enunciated each word, it occurred to me how each of those words had to be re-learned, slowly and painstakingly. And how each step she took was part of re-learning to put one foot in front of the other. Dr. Jill Bolte Taylor describes a similar process in her book A Stroke of Insight and TED talk. In the days, weeks, and months following her stroke at the age of 36, this brain researcher also describes the process of re-learning all those little things we take for granted each day—walking, talking, eating, relating.

And during a session in the gym last week, I saw a report on ESPN with the sound off showing a disabled teenager, whose misshapen legs made his gait awkward and difficult, playing football and soccer with his friends. The sheer determination it took for this child to work hard enough to be able to run as fast, though perhaps not as elegantly, as his able friends, as well as to pursue this dream despite the cruelness of some children at this tender age simply amazed me.

My suspicion is that inspiration is not merely in the act of observing. Rather, I believe inspiration is more of an active process—like the word itself, which Merriam Webster defines medically as the act of drawing air into the lungs. The other non-medical definitions of the word talk about the power of influencing or moving the mind or psyche. But I prefer the medical definition as it captures my sense of true inspiration—something that makes you take in air and just freeze in place with awe and admiration. Something that brings about a visceral physical reaction in you, as if you yourself were performing the actions you see in front of you.

For me, I think it is those moments, when I wonder to myself, “If I were in that person’s shoes, would I be brave enough to actually do what they are doing?” that I feel most inspired.

Existentialists talk so much about Being, but this is a case where Doing takes center stage.

What obstacles, what hurdles, what immovable mountains are we brave enough to move?