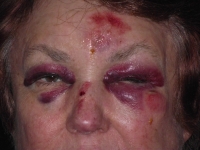 What was your first thought when you saw this photograph?  Did you wonder, “What happened?”  Did you make certain assumptions or guesses?  This is a photograph of my face after I tripped and fell on the sidewalk in Philadelphia where I live.  I can assure you it gave me new meaning to the expression, “Falling flat on your face.”  But even more, it prompted many existential reflections.

My first reflection concerned the fragility of life and how things can change in an instant.  I was walking along after buying colorful butterfly costumes for my granddaughters, when the toe of my sneaker caught on a protruding piece of pavement just the right way to find me flying.  In one instant I knew I was falling; the next instant I realized I had stopped the fall with my forehead.  This experience represented the existential concept that we are often “thrown” into a world we don’t control and didn’t choose – in this case literally!

After being taken to the hospital in an ambulance, I learned I had no concussion.  I did not break bones, my nose, or teeth.  I was, however, confronted with a very bruised face that lasted for several weeks.  Fortunately, I was able to hide most of the “damage” behind very large sunglasses.  But there were times when I forgot my bruised face and did not wear sunglasses.  My husband was afraid people would think he had physically abused me.  I was tempted to carry a sign with a large arrow that pointed to him with the words, “He didn’t do it.”  Once, when I realized I had taken off my glasses to read a menu I commented to a waitress, “Excuse my appearance, but I fell flat on my face.”  She replied, “Oh, I thought you had plastic surgery.”  (I could only wish!)  When I lifted my sunglasses when reporting for jury duty the clerk commented, “How ‘bout we call you next year!”

Sartre talked about the “gaze” of another.  We become aware of our own presence when we are aware we are being watched.  The gaze of “the other” is “objectifying” – when we perceive we are being perceived, we tend to objectify ourselves in the same way we are being objectified.  The gaze of the other robs us of our inherent freedom and may cause us to be less a “being-for-itself,” or subject, which implies agency, action, and creating.  When we realize we are being watched, we learn to falsify our identity as a “being-in-itself,” or object that is defined by its physical characteristics.  These theories can become confusing.  I prefer to ask the following questions when we judge others by outward appearance: What happens to us?  What happens to them?  And, what can happen to society?

Our culture has standards for attractiveness and beauty that may be impossible to meet.  Unfortunately, when we feel we are not considered “beautiful” by others or by ourselves, it can harm our self-concept.  Results can range from making us feel “less than” to psychological problems such as eating disorders.  Adolescents seem to be particularly vulnerable to how they appear to others and if they are seen as “attractive.”  Children who are considered “unattractive” may be the targets of bullying.  Elders, who are considered “unattractive” because they do not look young enough, may be the victims of ageism.  Judging others according to beauty standards serves sales of advertising, cosmetics, and plastic surgery – not individuals.

How often have you found yourself making a snap judgment of a person based primarily on appearance and later thought, “They are not anything like what I expected them to be?”  The problem with making quick appearance-based judgments, and we all do it, is we may not extend the effort to truly get to know the “essence” of the individual.   As individuals, we miss opportunities when we do not get to know who others really are; others miss opportunities when they do not get to know who we are.

On a societal level, judging by appearances can lead to “othering” – where one group is seen as “us” or “them”; one group is seen as “superior” or “inferior”.  It can lead to profiling, discrimination, and marginalizing parts of society.  On occasion we all judge others by appearance and make assumptions.  I realized I was guilty of this recently when I sat next to an African American young man on a train who was totally involved in a video game.  My first thought (read judgment) was, “He is so involved with his video game I wonder if he reads or is literate.”  I learned he had recently graduated from Princeton and wrote a dissertation on Cold War relationships between the U.S. and U.S.S.R. – playing the video game was a break from the studies he had just completed!

Judging by appearances can lead to “isms” that are not good such as racism, sexism, ageism, and colonialism.  Judging by appearances can marginalize and impact the lives of groups of people.  Think about Jews in Nazi Germany; Native Americans, African Americans, Japanese Americans during World War II in the United States; or Arabs, Muslims, or Middle Easterners in Western airports today.

Whether we are willing to admit it or not, our first impressions often lead to judgments based on outward appearance.  These first impressions or judgments may be on a subconscious level; we may not even be aware we are making them.  This may be harmless enough when we are people watching, but it can be dangerous if our judgments involve feelings of superiority, limit our opportunities, or limit others.  A humanistic approach might be to ask, “Am I judging this person?”  “Am I forming first impressions based on appearances?”  “Do I know this person?”  If you don’t ask these questions, you too, could fall flat on your face!