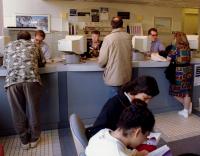 The belief that government must continue to be structured and must function in 2012 as it has in the past is a myth. There is much that public sector leaders can do to change their organizational culture, improve the quality of services they deliver, and become more efficient stewards of the public’s money. I would argue that one of the cornerstones of building substantive change in the public sector is interest and commitment to creativity in management’s thinking and in the creativity of the personnel they employ.

When government agencies are established, they are given a clear charge, like issuing driver’s licenses, for example, and they are required to operate within specific parameters and meet particular criteria. Beyond these mandates, however, leaders can cultivate a creativity-rich culture by attending to:

When the leader’s vision includes a commitment to creativity, employees experience a sense of urgency in finding innovative ways to achieve the agency’s purpose.

The following are a few suggestions agencies should consider.

Foster creativity. Creativity can emerge within an organization even if it does not include changing pay levels or job classifications. When agency leadership sets specific performance or cost-saving benchmarks and an individual or division meets these goals, leadership can do more than just recognize their achievements, they can award authority, and at least a portion of the saved resources so the innovations can be extended agency-wide.

Align people with the right tasks and goals. In the 2009 Harvard Business Review article “Why Change Programs Don’t Produce Change,” Michael Beer, Russell Eisenstat and Bert Spector contend that leaders should make every effort to assign employees and managers to tasks and roles for which they are particularly suited because of temperament, experience and expertise, and commitment to creativity. They also recommend engaging employees in diagnosing the problems or challenges that they will address; developing a shared vision of how to organize and manage for competitiveness; fostering consensus for the new vision; allowing each successive department or work group undertaking change to “reinvent the wheel” so they are fully engaged in their own process; institutionalizing changes through formal policies, systems, and structures; and monitoring and adjusting strategies over time.

Hire creative types. Administrators of governmental agencies and organizations almost never start with a blank slate. Whether the agency’s leader is elected, appointed, or hired, they inherit the existing staff, and have few options for “cleaning house” and beginning again. When it comes to hiring, however, they have choices. In screening job applicants, agencies can look for those with an intrinsic, or self-driven, motivation, and a willingness to put creativity at the center of their work. These applicants should have well-honed skills and relevant factual knowledge, and should be able to suspend judgment while actively looking for creative approaches and solutions.

Encourage the formation of effective work groups. Conversation and creative exploration becomes richer when groups avoid reaching consensus before all divergent views can be expressed and considered. To help ensure that minority views are more likely to surface, Michael West and James Richter recommend that groups not only include members that are likely to hold contrary views, but that those individuals should not feel like the lone voice in the conversation. When people can find at least one other person who shares their views, they are more likely to express those views and feel they are making an investment in whatever decisions are ultimately reached.

Support the formation of effective networks. Organizations are complex entities. Robust and resilient organizations do more than just acknowledge the existence of the ways their employees are connected to others outside their home work groups—they cultivate these networks. When individuals are part of networks that cross disciplines and levels within the organization, they are more likely to have access to ideas, knowledge, and skills that help them to develop creative and innovative solutions to the problems or challenges they encounter.

Make diversity of experience a precondition to promotion. The leadership in any kind of organization, including governmental agencies, can create more opportunities for ideas from one discipline to influence problem solving in another. They can even consider requiring employees to move laterally one or more times within the organization before they can be promoted. Few dispute the wisdom of having members of an organization learn about unfamiliar areas of operation. For Andrew Hargadon, a professor of technology management at the University Of California, Davis, the key advantage to interdisciplinary exposure isn’t thinking outside the box—it is the ability to free oneself from old ruts by applying reasoning skills from one domain to another. In this way, Hargadon argued in his 2009 article, “Creativity That Works”: “People do not think outside the box—they think in other boxes.”

Measure what you value. Leaders can provide powerful, extrinsic motivators for ensuring that creativity will be a hallmark within their organizations by making it a standard against which performance will be measured. Employees should understand that they are responsible to contribute to the creativity of their teams, work groups, and departments. And managers should be rewarded when they stimulate and support the creativity of those they supervise.

Generally, public sector employees are compensated according to standard pay schedules, and there is no such thing as “pay for performance,” or a bonus, for superior contributions to the agency. To address this issue, leaders in the public sector must look for non-monetary recognition, such as agency-wide acknowledgement of an individual or work group’s creativity in solving a problem, and establishing “pilot” projects throughout the agency to test new strategies for improving performance. Leaders can also make creativity more than just a pre-condition to advancement. They can make creative contribution a way to accelerate one’s advancement in the organization.

Identify and support each employee’s sense of professionalism. Most professionals consider those with similar training, education, and experiences to be colleagues of one sort or another. Public sector leaders should do more than just participate in their own professional communities; they should communicate a sense that each and every employee is considered a professional within the organization, and then provide access to information and other resources about the expectations associated with each of the professional positions they supervise. People who see themselves as professionals are more likely to ascribe the common values of professional practice to their own work and “raise the bar” for overall performance.

Leaders must hold themselves accountable to the same standards they set for others. People often have a keen sense of incongruity when someone’s actions do not match their words. When the mismatch between the expectation of employees and leadership persists, employees feel increasingly entitled to ignore—if not outright oppose—the directives they receive from the top. Here again, Beer, Eisenstat, and Spector can be helpful. In their 2009 article in the Harvard Business Review, they noted that when leaders “make an effort to adopt the team behavior, attitudes, and skills… their struggle with behavior change … lend credibility to top management’s continued espousal of change.”

Acknowledge that change is hard and is a process as much as it is an outcome. Organically-grown (rather than mandated) change in human relationships and organizations is seldom linear. At the beginning, most change is nearly imperceptible. Once it begins to take hold, however, it can quickly gain momentum. The idea of “phase change” can be helpful here. When you first put a pot of water on the stove to boil, nothing much happens except that a few small bubbles form here and there. As the minutes pass, the intermittent bubbles created as heated water molecules release oxygen quickly pick up speed until the water is at a roiling boil. Change in organizations often follows this same trajectory.

For all the bad press that public agencies earn and endure, they are not doomed to an eternally-formulaic existence. Given a slightly different perspective and enough passion to carry their initiatives forward, leaders in the public sector can tap into their own and their employees’ creativity to generate new results. With a persistent focus on convening the necessary resources and supports, it is more than possible to embed a commitment to creativity and rewrite the story about “how work gets done here.”