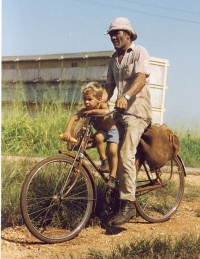 By Nick via Wikimedia Commons

My father, Clarence Hoffman, grew up the fifth child in family of eight in rural South Dakota. He went to college to become an agriculture teacher who sold insurance on the side. One of his friends once told me that at one point he debated between going back to school to become a minister or going into insurance. He decided he could more practically help people in insurance than in the ministry, so became an insurance salesman. This certainly is not a typical route to the insurance industry these days! After winning an award for teacher of the year, he left education to pursue insurance full time. He began in a small office with one employee in Charter Oak, Iowa, but before long had several agencies across Western Iowa and a growing number of employees. I always imagined that his reason for going into insurance – to help people – was probably why he was so successful. Later, he was recruited to running for the state legislature where he served for 10 years. His success is evident through his many awards, such as Independent Insurance Agent of the Year and being inducted into the Iowa Insurance Hall of Fame. Yet, I think his greatest contributions to society are those that he, himself, may not recognize.

One day back when I was in high school, a friend of mine said to me, “Hey, I stopped in and had a good talk with your Dad.” I asked what about, thinking it was likely about the upcoming football game. To my surprise, he just wanted to talk to my father about life and what he was going through. Over the years after that, I noticed more and more of my friends did this: They stopped in to talk with my father about their problems and about life in general. It was not just my friends, but many people in the local community. When I grew up in rural Iowa, if you wanted to see a therapist, you would often need to drive over an hour to find the nearest one. People turned mostly to family or one of the local ministers. Or, as I learned, they turned to my father.

The great need for therapy in our society is due, in part, to the failure of society in taking care of people through our families, friends, and communities. Therapy is something we created and then reified (i.e., made into a thing, something real) and now treat with great reverence. Yet, what my father did was often just as effective as therapy, yet it was free. He just offered himself as a caring person and listened. In existential therapy, it is advocated that it is the relationship and the therapist’s presence that is healing. This is what my father offered.

Growing up in rural South Dakota heavily influenced by German culture, my father was educated in the stoic lifestyle. Emotions were not something that he readily shared or was comfortable with. Yet, when my brother and I were young, he knew this was something that we needed from him. He read and pushed himself to become more emotionally available to be able to meet our emotional needs. I am certain this was highly influential on both my brother and myself, and likely played a role in me becoming a therapist in a psychological tradition that deeply values the breadth of emotional experience.

As a therapist, one of the questions I nearly always ask my clients is: “How were emotions expressed or viewed in your family growing up?” This sets the stage for how people experience emotions throughout their life. For my father, they were viewed with caution. Yet, he helped my brother and I learn to accept and value our emotions as a natural part of being human.

One of the greatest gifts my father taught me was to self-reflect. I remember clearly the day when my father told my brother and I that he and my mother were not perfect parents, and that it was important that John and I reflect on what they did right and what they did that did not work as well. At that time, I still idealized my father and could hardly imagine him making a mistake. Yet, his teaching us that he was not perfect was very influential. It helped me think more about how I was raised, and it helped me to be able to begin accepting that I, too, was not perfect.
Through the years since this time, I have often thought of what my father said that day when engaging in my own self-reflection. My father, who was greatly admired and respected in our community, modeled to me that we are all imperfect and that it was okay to be imperfect. This lesson began in me a continual process of self-reflection that I continue through this day.

My brother and I are both academics, and married to academics. All four of us are employed at universities, published authors, and deeply committed to higher education. Yet, my father has often been quite leery of academics. As a politician, he was concerned that many academics were great at producing theories, but so disconnected to the real world that their theories often had little practical application outside of the classroom and textbooks. As you can imagine, this leads to interesting dinner conversations!

To a large degree, I agree with my father, and for reasons closely connected to my existential foundation. Existential theory values the importance of real world experience and applications. It is unfortunate that this rich, practical theory too often is misunderstood as an excessively abstract, detached philosophy. Yet, existential psychology would agree with my father and say that if you are not applying your knowledge in the real world, it is essentially meaningless. However, an existential practice my also state that we cannot help but apply our philosophies in the real world; they are always with us, informing what we see, the meaning we derive from the world, and shaping our responses.

As a therapist, particularly an existential therapist, I have always felt it was very important to remain active in providing therapy, conducting supervision, and doing scholarship (theory and research). In doing these things, I am a better teacher. In being engaged in applying existential psychology in the world, I am also a better scholar and researcher.

In recent months, I have written a number of tributes to friends and family. Such tributes have long been important to me, beginning when I first wrote a tribute to one of my graduate school mentors, Robert Murney. These tributes are not just an honoring of people important to me, but a living of my existential values. In the existential approach, relationship is always central to practice. However, existential psychology is something that should be lived, not just thought. Too often, people do not understand how to apply these abstract ideas in the real world. My hope is that writing these tributes will 1) honor these people who have been very important in my life and 2) illustrate how existential psychology is lived in the real world, even beyond the therapy office.

My father was a great existential teacher, though he has never, to my knowledge, studied existential thought. He was engaged in the world and engaged with people. He was aware of the challenges in living and sought to respond to them the best that he could. When many people look to evidence of his success, they would point to his success in business, his accomplishments as a politician, and his awards. These are nice, but they are not the true measures of his success. My father now lives in Denison, Iowa, the town where Donna Read, star of “It’s a Wonderful Life,” grew up. The town now celebrates Donna Reed and this movie, with remembrances of the movie all over town. This seems fitting. My brother and I have often remarked how much my father resembles George Bailey; he is far to humble to recognize the powerful ways he has influenced people in his everyday life beyond the more evident markers of success. It is as a father, a friend, and a citizen that father has made his greatest impact. They run deeper and will last longer than the plaques on his wall and the trophies on his shelves.