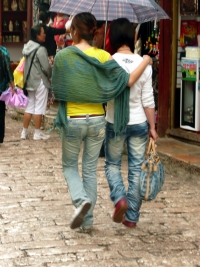 Maurice Friedman passed away on September 25, 2012.

For those who are not familiar with his work, Friedman may be best known for his many translations of the works of Martin Buber—the first to bring the philosopher’s ideas to an English-speaking audience—as well as his three-volume biography of Buber. Friedman has also written a great deal on dialogical therapy, which incorporates many of Buber’s ideas, most notably Buber’s I-Thou relationship and the notion of the “between.”

What seemed to unite those present was a critical attitude toward orthodox psychoanalysis, a concern for the person—the subject of experiencing—in the refusal to reduce the patient in therapy to a mere object of examination or to make social adjustment the goal of therapy, and a heavily European flavor of thought. (p. 104)

Friedman (1964) said that what links all the schools of psychology and psychotherapy was that they all have a particular conception of the “image of man,” for example, either as a collection of drives or behaviors. Thus, each school had a conception of what the image of a healthy person was as opposed to an unhealthy person. However, he said that such ideas of categorizing and cataloguing and reduction were outmoded. Rather, he said:

An increasingly important trend in psychotherapy suggests that the basic direction of movement should be toward the concrete person and his uniqueness, and not toward subsuming the patient’s symptoms under theoretical categories or adjusting him to some socially derived view of the “ideal” man. This trend means an emphasis upon the image of man as opposed to the construct of man, the understanding of man in his concrete uniqueness as opposed to the synthetic combination of analytical subcategories such as Freud’s division of the psyche into id, ego, and superego. (Friedman, 1964, p. 106)

In this new third force of psychology, no longer would the therapist simply reduce the client to a collection of either behaviors or drives. Concern for the person involved looking at the client’s personal experiences—those that made that client completely individual and irreducible.

In Friedman’s work, this kind of therapeutic style took the form of the healing dialogue. Based on Buber’s idea of “‘all real living is meeting,’” (Buber in Friedman, 1988, p. 20) Friedman that a real relationship—including a real therapeutic relationship—takes place when “two persons participate in each other lives, not merely psychologically, as images or feelings in one another’s psyches, but ontologically, as manifest, even if not continuous, reality of the between” (Friedman, 1988, p. 21). He explains that both parties must be “a real person in his or her own right” for this to occur (p. 21).

What this means is that they must strive for what Buber called the “I-Thou” relationship, as opposed to the “I-It relationship.” Friedman (1988) explained that Buber’s “two-fold principle of human life” incorporates two movements. In the I-It relationship, humans set each other at a distance—they objectify. In the I-Thou relationship, they enter into relationship—they meet each other as subjects. However, Friedman said that in order to come together, humans must necessarily be set at a distance, so there is a relation between these two movements. This movement is between the independence of the I-It and the interdependence of the I-Thou.

Most relationships, Friedman (1988) said, vacillate between moments of I-It and I-Thou modes of relating, creating what is known as the dialogic—the between. He also says that in contrast to other forms of psychology, even humanistic psychology, self-realization and self-actualization are the by-products of this meeting and this dialogue, not the goals. Friedman argued that by emphasizing the dialogic and de-emphasizing self-actualization, Buber distinguished himself from other existentialists such as Rollo May and Ludwig Binswanger, who Friedman said viewed the I-Thou relationship as “just another dimension of the self, along with one’s relationship to oneself, and to one’s environment” (Friedman, 1988, p. 22).

These relationships are not simply about two people connecting either in space or by speech or through other social realms. There is the additional element of “confirmation,” the recognition of a human being’s uniqueness (Friedman, 2009, p. 410). He quoted Buber, who said:

The inmost growth of the self does not take place, as people like to suppose today … through our relationship to ourselves, but through being made present by the other and knowing that we are made present by him. (Buber, 1988, p. 61 in Friedman, 2009, p. 409)

Thus, creating an I-Thou relationship or a healing meeting relationship is not simply about physical proximity or even engaging in conversation. There has to be a real mutual connection through which both participants recognize and honor one another’s uniqueness, or subjecthood. It takes on a character similar to what the Sanskrit greeting “Namaste” means—“I salute the Divine within you.” The I-Thou relationship confirms that sense that within each party, the Divine, in whatever form that idea is understood, is present.

Using this dialogue for healing in the psychotherapeutic relationship, according to Friedman (1988), depends both upon the emphasis on the meeting space “between” therapist a client as “the goal and also as the means to that goal” (p. 24). Thus, what is “crucial” in therapy, Friedman said:

is not the skill of the therapist, but rather what takes place between the therapist and the client and between the client and other people. The one between cannot totally make up for or take the place of another. No amount of therapy can be of decisive help if a person is too enmeshed in a family, community, or culture in which the seedlings of healing are constantly choked off and the attempts to restore personal wholeness are thwarted by the destructive elements of the system.” (Friedman, 1988, p. 24).

As a result, Friedman suggested adjuncts to one-to-one therapy, such as family therapy, so that the between space created in the therapeutic relationship could also be nurtured in the outside world, helping the client to work with the “between” spaces in his or her other relationships as well.

Friedman spoke about these ideas on numerous occasions, including the first annual conference of the Society for Humanistic Psychology in 2007, as well as at Saybrook University in 2009, where he accepted the Rollo May Award. At the former, I had the opportunity to have dinner with him alone, where I witnessed him living out these ideals of meeting in person, as he shared his ideas and even written work with me as a young graduate student he had just met in a way that made me feel like we had been dear friends for years.

Thank you, Maurice Friedman, for your work and your life.