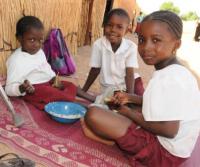 This Thursday, October 11th, marks the first International Day of the Girl Child, a global day of observance declared by the U.N. One might ask why have a day that observes the girl child and not the boy child or all children? There has been talk in certain circles that, with all of the past and current girls’ and womens’  empowerment initiatives, too much attention is being given to the girl child and that the boy child has been neglected.

A few months ago, for example, I was listening to a talk show on radio here in Kenya where a rigorous debate ensued between the host of the show and show’s guests. Several listeners called in—some took the position that the girl child and women in Kenya have become “too empowered” and the “boy child and men have been neglected.” Some callers even referred to some domestic violence cases that had been reported in the media recently where women had brutally attacked their male partners and citing these instances as proof that women had become too empowered.

After listening to this debate on radio I was left wondering how those that took the position that girls and women had become too empowered defined the term “empowerment.” While the term “empowerment” is known to have different meanings based on social, cultural, economic or political contexts, two common aspects of empowerment seem to stand out for me—the first is the right to one’s own choice and the second is self determination as precursors to a life of dignity.

In my humble opinion, it seems that an “empowered” individual—whether male or female—would probably not make a “choice” of unleashing violence on another human being. In my view, it seems to make more sense that a “disempowered” individual would most likely “choose” to perpetuate violence against another as this seems to go contrary to upholding our collective human dignity.

According to The Elders, an independent group of global leaders led by Archbishop Desmond Tutu who work together for peace and human rights, choices chart our path.

“Choices define us and allow us to realise our potential,” wrote Archbishop Tutu and Graça Machel, an international advocate for women’s and children’s rights who is the first education minister of Mozambique. The two Elders were addressing this year’s theme for the International Day of the Girl Child, which is child marriage. “Child marriage,” they noted, “robs girls of this chance.” The “chance” is being able to make their own “choice” of a marriage partner as adults later in life.

An estimated 25,000 girls around the world younger than 18 are married off every day, according to The Elders, which was formed in 2007 by Nelson Mandela, who is not active in the organization today, but remains an honorary elder. In addition to Archbishop Tutu and Machel, current members of The Elders include former U.S. President Jimmy Carter, former U.N. Secretary-General and Nobel Peace Laureate Kofi Annan.

One might wonder why the focus of the first annual International Day of the Girl Child is child marriage?

According to The Elders, “The issue of child marriage is often set aside as a sensitive ‘cultural’ issue; something that is taboo and difficult to address.”

As an organization, The Elders say they have dedicated the past two years to challenging this assumption and put child marriage at the top of the global development agenda. In 2010, The Elders began to forge a global coalition of organizations called Girls Not Brides: The Global Partnership to End Child Marriage to tackle early marriage around the world.

The Girls Not Brides global partnership asserts that the International Day of the Girl Child is “a global celebration of adolescent girls and overdue recognition that if we unlock their potential, we can build a healthier, more just and prosperous world.” According to the partnership, an estimated 10 million girls are married as children every year, “denying them their rights to education, to health and to live in safety and security.”

Child marriage is an issue that I am passionate about and have been actively involved in by helping to sensitize people about it through my writing and advocacy work. It is an issue that is central to the many challenges girls face all around the world, with a rather prevalent practice in many parts of Africa. Having explored this issue in a previous post, “Child Marriage: A Real Killer of Adolescent Girls and Infants in Africa,” it is great to know that more organizations and people of good will are paying more attention to this issue.

I agree with Archbishop Tutu and Machel’s thinking that child marriage “robs” girls the chance of making choices—choices that determine the quality and outcome of their lives. Lately, I have been almost constantly reminded of the gravity of this matter in my work as a volunteer facilitating an anti-female genital mutilation (or FGM) campaign project here in Kenya. Speaking with various stakeholders in the communities that we are working in makes it very clear that many girls indeed do not get a chance to know what is being done to their bodies, especially when in some of these communities FGM takes place when many of the girls are only a few days old. In other communities, the girls may be toddlers or younger than age 5. I have been told that the reason FGM is done while these girls are still very young is they purposely do not understand what is being done to them, which lessens any resistance an older girl may express about the practice.

There is a strong connection between FGM and child marriage. Research shows that many communities that practice FGM believe that a girl is ready for marriage once she has “been cut.” Clearly, FGM and child marriage are cultural practices that deny girls the opportunity to make a “choice” about their bodies and their lives. These practices, in my view, should be abandoned as a much-needed move towards upholding our collective human dignity, presenting an opportunity to not only empower girls and women, but entire communities for a more humane and equitable world for all.

In seeking to better understand the “why” behind the need to empower girls and women, I think that a good place to start would be for us to seek understanding on how societal cultures create situations that “disempower” girls and women by perpetuating thinking, practices, processes, structures, and systems that rob them of the right to make “choices.”

Every human being is entitled to the right of “choice” and self-determination as precursors to a meaningful life of dignity, which are the causes that, I believe, support the upcoming celebration of International Day of the Girl Child. In many countries, girls and women continue to live in a world where they do not receive the same benefits and rewards that their male counterparts receive because of entrenched cultural phenomena, like male dominance, male identification and male centeredness that are embedded in systems of patriarchy that fiercely uphold male privilege.

The question becomes are people willing to listen to The Elders and, like them, take a stand against child marriage and other human rights violations faced by girls and women? What can each one us do to make things better for millions of girls and women around the world?