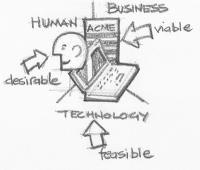 “I have not failed. I have merely found ten thousand ways that won’t work.” ~ Thomas Edison

I spent an inspiring day in Palo Alto last month at the design firm, IDEO. I am a member of a community of consultants and educators who use a simulation designed by the Canadian company, Experience Point, in collaboration with IDEO to teach design thinking. We gathered to share our experiences and deepen our understanding of design thinking tools.

I would describe design thinking as three parts philosophy and one part methodology. The philosophy views people and their needs as the gyroscopic force that stabilizes and directs the designer’s work. The methodology, which varies by practitioner and firm, generally guides the designer’s work through phases and steps that involve observations, ideation, and experimentation. Tim Brown, president and CEO of IDEO defines “design thinking” as “a human-centered approach to innovation that draws from the designer’s toolkit to integrate the needs of people, the possibilities of technology, and the requirements for business success.”

Leaders who want to increase innovativeness in their organizations seem overly attracted to the ideation stage of design thinking. They envy companies, like Google and Apple, and presume that the ideas for maps and the iPhone emerged fully-formed from the heads of a creative genius or two.

Design thinkers, on the other hand, have a bias toward experimentation and prototyping. There’s an entertaining and surprising TED talk by Tom Wujec that illustrates the power of prototyping. Wujec points out that MBAs are often taught to use analytical tools to identify the optimal solution before implementation. Flawless execution comes from deep analytics and careful, systemic thinking. The assumption behind a flawless execution frame-of-mind is that mistakes are costly. Even though one never sees the value of the education on the credit side of the cost-of-failure ledger, it is hard to fault leaders who want to protect their organizations from calamitous decisions. Yet even the most venerated organizations, operating under the banner of flawless execution, can make questionable decisions… New Coke, anyone?

When we visited IDEO and the d.School at Stanford University it became clear that experimentation needn’t wait for a nod from an executive. Experimentation is a way of life. As our group made its way past the blocks of foam core, bins of knick-knacks, and the ubiquitous roles of duct tape, I came to understand that experiments and prototypes are designed for learning, not convincing.

The designer has an idea, imagines how the human beings served by the idea might interact with it and then forms a question, like I wonder whether people will use their thumbs or their index finger to type out messages on this device? or What will happen to trust levels in our organization if employees have a bi-weekly, one-on-one meeting with their immediate supervisor? The prototype or experiment becomes a way to answer the question while remaining open to what can be learned from what works and what doesn’t.

In many organizations, ideas gets vetted, buttoned-up, socialized, and analyzed before they ever get in front of someone with the authority to say “let’s give it a try.” With each stakeholder conversation the idea gets shaped and compounded as people contribute warnings and wishes. By the time an idea reaches an executive audience, the stakes have been raised to the point that the presenter is under more scrutiny than the idea.

Tom Kelly, the General Manager of IDEO suggests lowering the bar on prototypes of ideas. In his book, co-authored with Jonathan Littman, The Ten Faces of Innovation, Kelley and Littman refer to the power of “low-fidelity prototypes.” At IDEO, one frequently hears the adage, “Fail often to succeed sooner.”

Part of adopting a design thinking mindset is reacting in new ways to the traditional boardroom presentation. Instead of asking, “What do you recommend?,” executives wishing to increase innovation in their organizations might want to start asking, “What do you want to find out?”