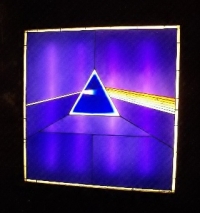 The other day my teenage son started telling me why he thought it wasn’t good to watch the news. “You watch and something bad may have happened and you’re like, ‘eh’. You’re jaded. You get so used to seeing bad shit. Bad things shouldn’t be normal, but when you watch the news you keep getting exposed to things like stabbings, rape, war, that you just think it’s normal, and that’s the only thing going on in the world.” I asked him what he thought would make the news better. “Try and get a mixture of the good news, the bad news, and the informative news. The informative news is why news exists, right?—because it’s what we need to know. Syria is not exactly a happy situation, but people need to know about it.” I thought a lot about his comments, and how heartfelt and insightful I thought they were. And then I thought about Pink Floyd.

I was recently in my car and the song “Comfortably Numb” came on the radio. I hadn’t heard it in ages, but remembered all the words. The thing is, this time I listened differently. In 1979, when I was so into the album The Wall, I was in my own hell of early teenage angst, not thinking too deeply what was meant by the lyrics “comfortably numb”. It was much easier to relate to “we don’t need no education”. I know it’s highly subjective and therefore open to interpretation, but while I was listening to the song, I thought about what my son had said about the news, and how he is experiencing the world. We have become numb to destruction, violence, disaster, and death. We have become numb because we are not present. We have become numb because we are over-exposed, over-whelmed, over-burdened by the bad and the ugly. We have lost what May termed our “moral courage.”

In The Courage to Create, May (1975) outlines several different kinds of courage. He discussed moral courage by highlighting the story of the Russian author, Aleksander Solzhenitsyn, who protested against the cruel treatment of men and women in Russian prison camps.

Solzhenitsyn’s courage… arose not only out of his audaciousness, but also out of his compassion for the human suffering he saw about him… that moral courage has its source in such identification through one’s own sensitivity with the suffering of one’s fellow human beings… If we let ourselves experience evil, we will be forced to do something about it. It is a truth… when we don’t want to confront even the issue of whether or not we’ll come to the aid of someone who is being unjustly treated, we block off our perception, we blind ourselves to the other’s suffering, we cut off our empathy…. (pp. 16-17)

We become comfortably numb, and so lose our moral courage.

It would be easy to continue this writing admonishing our lack of moral courage and calling us, as a group, a nation, and a society to action! Do I get frustrated with myself, and the world? Yes, of course. And some of this may be helpful to bring into focus what action I personally, need to take. The point I really want to make is that I believe that the struggle, as evidenced in the song, is that there is almost a cognitive dissonance around being comfortably numb. It’s actually not comfortable at all. So why are we numb to consistent suffering in the world? If we are not able to have moral courage, we must have compassion for this reality first. Life is hard and we are in it. It’s not easy to be present, but we must. It’s not easy to have compassion for others if we do not have compassion for ourselves. So maybe start there, ok? Cultivate your self-compassion by accepting that there are awful, terrible things going on in the world, and this fact is deeply disturbing and saddening. And we can’t fix it all, which may feel even worse. Have compassion for the part of yourself that is the witness and the bearer. And while we don’t need to know all, we do need to know some. It’s important. With this acceptance, we are present. In this presence and compassion, we gain our moral courage once again.