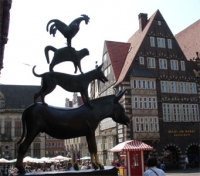 Statue of the Bremen Town Musicians

Two faculty members from Saybrook’s College of Mind-Body Medicine are attending the meeting of the International Society of Hypnosis (ISH) in Bremen, Germany, October 17-21.   Bremen is known to tourists as the site of the well-known fairy tale about the Bremen Town Musicians, made famous by the Brothers Grimm.

The International Society of Hypnosis is the primary international organization of mental health and health professionals dedicated to the promotion of scientific research and the development of clinical practice in hypnosis. The constituent national societies making up ISH range from Poland to Iran to Japan to South Africa.

MBM faculty members Donald Moss and Eric Willmarth are attending the Bremen meeting.   Dr. Moss will participate in a symposium on philosophical topics in hypnosis. Moss will also conduct a 90 minute introductory workshop on heart rate variability training. Current research shows that heart rate variability is a correlate of hypnotic depth, and clinical reports suggest that HRV training may enhance an individual’s ability to participate in hypnosis.  Moss is one of two delegates from the North American organization SCEH to ISH, and will participate in the ISH executive council meeting.

In Bremen Dr. Willmarth will conduct video interviews with several leading figures in the European hypnosis community, for his “living history of hypnosis” project.  Willmarth has constructed an online archive of video interviews with many of the great names in hypnosis, including now deceased figures such as Herbert Spiegel, Jack Watkins, Harold Crasilneck, and Erika Fromm.   This archive can be found at http://www.ewillmarth.com and provides an abundance of rich material for hypnosis education.  One recent development is a series of interviews with hypnosis leaders who send specific messages to Saybrook students for their hypnosis learning.

The International Society of Hypnosis meets once every three years, and attracts approximately two thousand attendees from every corner of the globe. The first international hypnosis meeting took place in 1889 in Paris, and Paris will be the site of the 2015 meeting as well.  The ISH website can be found at www.ishhypnosis.org