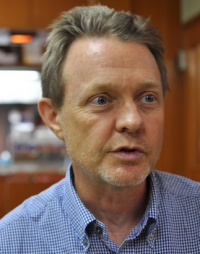 David Willis began teaching at the School of Mind Body Medicine in 2010 with courses in Qualitative Methods and the Challenges of Midlife to Elderhood, following that with mentoring new graduate students.  He is currently transitioning from his role of mentoring to working with students throughout their dissertation process, from Concept to Proposal to final Dissertation. Doctoral students are sure to benefit from his diverse perspective as a Cultural Anthropologist and 37 years of mentoring students in an academic environment.

David joins the Saybrook community after living and working in Asia for 35 years.  After spending five years living and teaching in Southern India, David traveled to Japan.  It was there that he met his future wife in the garden of a Zen temple in Kyoto.  They had two sons, one born on a mountain top in South India and the other in Tokyo’s Ginza, one of whom is now an ophthalmologist at UC-Davis and the other an architect in Istanbul, Turkey. He has two grand-daughters, too, who live in Sacramento, as does David and his wife Mika Obayashi. After teaching in international schools for ten years, David remained in Japan and began working as a professor of Anthropology and Education at Soai University in Osaka, a flagship Buddhist university for Japan’s largest Buddhist sect, Nishi-Honganji. David was the first tenured foreigner and first non-Japanese person to be a Department Chair, a public recognition of the University’s respect of his work.

David has cultivated a rich perspective that began with his roots in Iowa.  His early life was informed by his family’s long lineage of service professionals; from preachers to lawyers to doctors, his family has always been committed to a higher sense of purpose in their lives and healing/teaching work in their many dimensions.

As an anthropologist David is interested in how culture impacts our work in mind body medicine.  His own experience with mind body medicine has been informed by his life in Asia, with David personally introduced to the value of mind body medicine after injuring his knee in a Judo accident.  His initial visit to a German allopathic physician left him with a grim diagnosis.  This physician informed him that in 1.5 years he would not be able to walk, yet the physician offered no alternative treatments.  Unable to accept this devastating diagnosis David consulted with an acupuncturist.  After 3 visits his symptoms were non-existent.

David began the practice of yoga and regular consultation of Ayurvedic physicians while he was living in India.  He explains that the Ayurvedic doctors whom he consulted were from an ancient line of practitioners. They became good friends, encouraging him to seek healing in many traditions, including allopathic medicine.  Since his time in India, David’s self-care regimen includes a regular yoga and meditative practice as well as the use of Ayurvedic principles.  His personal practice of yoga and Ayurveda has made him appreciate the importance of honoring the body’s natural rhythms of life.

Living abroad has increased David’s perspectives and his appreciation of the complexities of cultures. David is particularly interested in cultural transmission, how values, rituals, and beliefs are passed down from one generation to another.  He explains that culture is not something static but is a dynamic interplay among the unique aspects of each person’s (and each community’s) lived experiences. Deeply influenced by the nature of change, this active way of looking at cultural transformation is informed by the mixing of other cultures, the eras in which we live, and the cross-generational influences that are always an important part of our social worlds.  He is especially interested in the ritual passages marked by shamans in Japanese and Indian cultures and has a deep commitment to issues of Social Justice and Equity in health care.

David’s life experience, his work in academia, and his unique views on life are sure to add a special depth to his interactions with students.