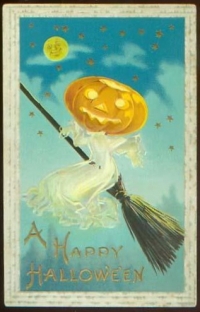 Halloween is a curious cultural phenomenon isn’t it? Whatever else we may say about it, it is probably the most interesting and fascinating holiday from a psychological perspective, in terms of what it reveals concerning our collective psyche.

On the surface level alone, we have plenty of reasons to pause, wonder, and speculate. Indeed, let’s consider the wide range of costume choices and decorations; vampires, werewolves, witches, goblins, ghouls, monsters, and all sorts of varying freakish creatures. Granted, there are certainly many non-scary options, but historically, these are the most central visual representations of Halloween and remain those that are most commonly associated with the holiday. So, to explicitly state the obvious, the essential feature uniting these representations is of course their “scary” quality, their capacity to frighten and disturb us. While there certainly are signs of this quality within American culture, indicating that in some ways we are drawn toward that which scares and frightens us, there are many more signs that appear to demonstrate the opposite, that is, a strong resistance toward such disturbing elements. We really are not a culture that likes to be disturbed by the darker realities of human life, and the proof of this point lies in the glaring fact that the dark side of life receives cultural sanction only one day within the calendar year.

That is what particularly intrigues me about the phenomenon of Halloween in American society, this overwhelming lack of balance in our collective awareness between “light” and “darkness.” This is the one and only time during the year when the dark forces of existence are allowed to emerge from the shadows and assume center stage within our cultural consciousness. During the rest of the year these forces remain on the fringe of our attention, held back within the shadows and submerged underneath brighter, more cheerful, and more pleasant phenomena. What is generally perceived as strange, threatening, and menacing at any other time is the expected and accepted normative standard during our celebration of Halloween. Whereas symbols of the macabre and grotesque are typically minority elements within our popular culture, at best merely tolerated and at worst forcefully suppressed, during this one holiday they are actively embraced and promoted as the reigning cultural theme. This dark symbolism, and the ubiquitous power of its disturbing images, should not shock us; what should shock us, I would like to suggest, is the revealing fact of its dominating presence during this one holiday and its peculiar absence during the rest of the year.

It is this pronounced absence that betrays the true meaning of Halloween in American society and culture. While on the surface level, it is great for children and adults to have an opportunity to dress up in costumes, trick-or-treat, and one hopes, access the creative power of imagination, on a deeper level, we need to acknowledge the revelation of banished darkness that this holiday provides. For as we know all too well but try so hard to forget, the reality of human life is composed of both light and darkness, as indeed is the whole of Reality and Existence itself. The dark elements of negation are seamlessly interwoven with the light elements of affirmation to form the fabric of our existence, two primal, counterbalancing existential forces that together establish the necessary foundation for a holistic experience of life.

Our most essential problem and difficulty as human beings is precisely here—overcoming a universal tendency to deny and avoid the negating forces within existence that cannot be escaped and must be directly confronted. Let us remember, as well, why this process is so difficult and challenging, for at its core is the ultimate negation, the reality of death. What is required of us is not merely to accept particular concrete negativities and experiences of death within life, but to honestly face and passionately affirm the raw, bare fact of negation, and the pervasive presence of death at the heart of Life itself (Becker, 1973). We spend so much of our lives in desperate attempts to avoid an awareness of our inherent finitude and the innate finitude within life and our experience of it—limitations, losses, and endings.

However, quite tragically, in doing so, we don’t recognize and neglect the supreme mystery of Existence, namely, that limiting boundaries enhance our freedom; gains and growth are achieved through loss; new beginnings only arise from the ashes of endings; negations underlie our affirmations, and our finite nature points to our inseparable union with the Infinite (May, 1983; Tillich, 2000). New and greater life only emerges from the death of old and outlived forms. Halloween heightens our collective consciousness of the reality of death, placing it at the center of our cultural awareness during one holiday, but we need a more consistent reminder throughout the year.

I am not suggesting that we create more holidays like Halloween to honor death and the darker realities of life, or that we increase the visibility of related symbols and images throughout popular culture. What I am suggesting is that we approach Halloween as an opportunity to become more aware of the extent of death/darkness denial within our individual lives and our broader culture, making a commitment to overcome it and live lives that are more fully aligned with the whole of Reality and Existence, embracing negation as the source of affirmation and death as the source of life. Perhaps if we were better able to do this we wouldn’t need to rely on one holiday per year and our various extreme forms of cultural death/darkness fixation as releases for the natural energies that demand admittance into our consciousness. Without the need for such severe repression, every moment in our daily lives can become a potential opportunity for a more balanced integration and expression of the darker existential forces within our experience of life.