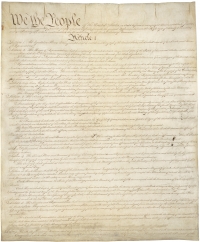 Every four years, we, as Americans, have a unique opportunity to voice our opinion by voting for the next President of the United States. It is a right given to all United States citizens that was not always there. However, according to the United States Census Bureau, in the 2008 presidential election, only 64 percent of the registered voters actually exercised that right to vote (File & Crissey, 2012). Given the history of voting rights, one would wonder why.

Throughout American history, individuals have challenged the status quo, fought bloody battles, risked jail and alienation, among other things, for the simple right to voice their opinion – that is, the right to vote. Constitutionally, this right is given in the main body of the document and subsequently amended in six of the 27 Constitutional Amendments.

Early in American history, the right to vote was given to the people with the requirements decided by each individual state’s governing body. Therefore, while voting rights were procured by our Constitution, who qualified as a voting citizen varied by state. Primarily, only those individuals who were wealthy enough to own property or pay taxes procured voting rights provided that property owner and/or taxpayer was white, male and over the age of 21. The 14th Amendment, ratified on July 9, 1868, changed that status quo to include all tax-paying citizens born or naturalized in the United States. Therefore, if you rented property or were of an ethnic minority, you could now vote. However, states that still held the gate key to the voting rights, made qualification very difficult for many citizens by requiring things such as a literacy test to be able to vote, thus depriving many citizens of their Constitutional Right.

February 3, 1870 marked the ratification of the 15th Amendment taking away the state’s power to preclude voters provided they were male and older then the age of 21. Women won the right to vote in the 19th Amendment, dubbed the Susan B. Anthony Amendment, on June 4, 1919. The 23rd Amendment gave the residents of Washington D.C. the right to vote on March 29, 1961. While the 24th Amendment prohibited both Congress and the states from taking voting rights away from those individuals who owed taxes. Lastly, during the Vietnam War, when American youth were drafted into war, the 26th Amendment was ratified on June 22, 1970, extending voting rights to those individuals who were of drafting age, 18 years and older (U.S. Constitution, 1787).

That freedom to vote, hard fought and won, is not the end but the beginning of our responsibility. In Man’s Search for Meaning (1963), Viktor Frankl wrote:
Freedom, however, is not the last word. Freedom is only part of the story and half of the truth. Freedom is but the negative aspect of the whole phenomenon whose positive aspect is responsibleness. In fact, freedom is in danger of degenerating into mere arbitrariness unless it is lived in terms of responsibleness. That is why I recommend that the Statue of Liberty on the East Coast be supplemented by a Statue of Responsibility on the West Coast. (pp. 209-210)

Today, that responsibility, to some extent, has been criticized and ignored in our culture. From an existential view, let us also remember our ability to make our own choices, and thus choose our attitude. As Frankl (1963) wrote, “the last of human freedoms [is]….the ability to choose one’s attitude in a given set of circumstances” (p. xi). Our circumstances are vastly different from those who fought to procure this right. Let us honor the memories of those individuals who risked much, including life, to give us the choices we have today.

Whatever the present issues are, one thing is for certain. As James Hillman states in an interview with Bert H. Hoff (1998), “We have to give value to office, being in office, holding office.” Perhaps that value of which Hillman speaks can begin with our own act of voting.

The Constitution of the United States. (1787). Retrieved from: http://www.usconstitution.net/const.pdf