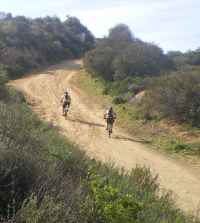 It was about 6am when I embarked on a training ride on a cool Sunday morning. The house was quiet, and the only sounds were mine as I filled water bottles with ice water, pumped my tires, and opened and shut the door on my way out. The air seemed crisp and clear. The crank-set of my racing bike seemed smooth and so mechanistic. I was aware that it was my body that animated this high tech machine on the asphalt city streets. There was a hum of the tires against the road that was audible just above the sound of my mp3 player pulsing with the driving sounds of rock ‘n roll.

As I spun down the roadway of the city, I noticed the white, red, and orange glass and plastic fragments left in the intersections of other roads. There are always triangular shaped accumulations of gravel and remnants of car crashes at the intersections. Thoughts about who might the people have been who were in the crashes. Were they hurt? How much of a disruption to their lives were these crashes; financially, emotionally, inconvenience? Were their cars restored back to their original conditions? These bits of glass, plastic, and an occasional nut or bolt are the artifacts of an event that happened to them. Do they even think about it anymore?

As I reflected on my thoughts, I reflected on my reflections while my body was hammering through the revolutions of the machine I was riding. I was feeling alive! Pulse racing, hard breathing, and beginning to sweat, I could feel myself cutting through the air as my race carved a rut through the light breeze. There is a transcendence that can be experienced when one is overcoming his or her normal human limitations. Driving power through this highly engineered piece of metal, carbon fiber, and rubber machinery to propel my body at 20 MPH down a city street is expansive and freeing.

The Tour de France bicycle race had just started a few days ago. I remembered what I had learned about these highly trained athletes. Their sprints, all the miles, and the hill climbs in the French mountain ranges. They are champions and heroes in their abilities to take nearly a month of daily races that average 100 miles per day. The crashes, the streets lined with race fans, and the numerous support vehicles and staff. I remember when I was in high school how I used to pretend that I was a Tour de France racer when I was out training. I remember how motivated I was to push and push, to be a champion in my own right. These memories came to me has I headed toward the Wasatch Mountains to do some climbing, and the sun began to peak over them as I rode closer and closer. I could feel the heat of the sun, and it was bright enough to make my eyes sting some. But I was going to climb those mountains in the face of the sun. I was feeling so alive!

I began my ascent at the foothills on a road that winds up the mountain side, over the top, and down the other side into the next county. I was ready to conquer this hill today. I had never done it before and had tried several times in years past. I was younger then, but was I healthier? My resting pulse rate and blood pressure have not ever been as low as they are now. But my body is much heavier, and that will take a lot more energy to get me all the way over the mountain pass. The road has grades as steep as 12 percent, but it mostly stays around 8-10 percent with some small flat areas and slight descents where my body can get a little break. Not only does one notice the strength fade on hills like this, but the pain throughout one’s body on these climbs can be immense. I have complete control over how much and how long I suffer. It is a matter of the will and nothing else, or so it seems.

I climbed past a police station and then a fire station. Thoughts emerged about the men and women working on this beautiful and quiet morning, just like the Sunday mornings I had worked for 23 years before retiring. I wondered if anyone in those buildings were friends. I almost felt like I was playing hooky by being out riding my bicycle rather than being on the job. Paradoxically, I was working harder and suffering more on the climb past these public safety buildings than I ever experienced working in them. But it was the differences in the meaning—between duty and sacrifice versus exercise and sport. I kept climbing and had conciliatory memories of the Sunday morning fire house breakfasts I used to enjoy. Thematically, I was leaving that behind to go to higher places.

I was headed toward a bend in the road when a sudden blast of wind hit me head on. My road speed was only about 6 MPH on this 10 percent grade, but the wind pushed me down to nearly half of that in less than a second. I persisted, and the wind gust was over, so I felt a sense of victory—anxious victory. The wind’s power was greater than me. My body knew that as the blast shoved me in the chest, and my resistance only set my legs on fire.

As I climbed, my throat began to burn and sting from the smoke in the air. It has been a very hot and dry summer with wildland fires burning throughout the region. Many of my friends have been spending days on the sides of mountains fighting fires that were in the thousands of acres lost. The burn in my throat reminded me that they did not wear respirator protection in wildland firefighting, and the work is rigorous. I imagined how they might feel their throats burn, but they persevere in their work—duty and victory versus exercise and sport. I took some pulls out of my water bottles to fight the burn. I found a place where the road widened, and it was about that time that the wind gave me another challenging blast in the face. I looked up the hill, and the roadway seemed to steepen. I stopped on the wider section of road to get some water and a sport gel for energy. I thought, “a little rest, some water and fuel, and I will get this done.”

I re-initiated my climb to the top when I suddenly got another gulp of smoky air that set my throat on fire! It was time to go another direction. So I turned around and decided that I would ride along side of the mountains on the foothills of the Rockies. As I pedaled along the highway, I could see the morning splendor of the Salt Lake Valley. The air now felt crisp and clear with the view bright and full of color. I was feeling transcendent in the way that Maslow describes in Religions, Values, and Peak-Experiences. I was so alive and self-actualizing until I was confronted by the scene of a human death. A police officer who had been rescuing a stranded hiker up on the mountain had fallen to his death. The highway was lined with fire engines, police cars and other emergency vehicles that were still on the scene for investigation purposes. I had seen the news reports before I left on this ride. But now I was “here” at the scene were colleagues of mine were “cleaning up the mess.” This was not just any mess, however. It was the loss of one of our own while in the course of saving the life of another.

The paradox was so thick I could chew it. I was alive and engaged in an activity to sustain my own health and wellness. But I was reminded continually on this ride that I was mortal and a Being-unto-Death, just like everyone else. We can make heroic attempts to transcend our human situation, but ultimately will find our final hour. Accidental deaths, murders, and catastrophic events remind us that we are very fragile, and life is contingent.
As such, our time spent and our efforts must be chosen wisely because wasted time cannot be recuperated. Love conquers all, even death, because it is the one thing that sets us in one another’s hearts and minds after we go. In all of life’s absurdities, it is the memories and memorials of those that went before us that constitute their legacies. It is the legacy of our existential teachers that has provided us with a different perspective on ourselves and our worlds. And I sit here and write this for an “Other” or perhaps “nobody” with the belief that it might matter…or not. There is no certainty that guarantees that my experience and reflections upon it will be of any use or value to anyone else. Absurd…or not?