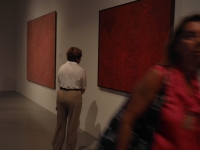 In 2006, I self-published a little book on art and creativity. The book was called An Artist’s Thought Book. It contained five chapters with 60 maxims on different topics related to art: painting, poetry, music, etc. I enjoyed the process of creating the book and doing few a bookstore signings. So I’ve decided to compile another little book called A Psychologist’s Thought Book. This book will have a different series of chapters, and in addition to each maxim, there will be a brief explanation of what I thought the small saying meant. Here are three of my maxims from the chapter on Paradoxes.

You can’t educate me until I’m done being ignorant.

Once, during a heated argument, I said that exact phrase to a person who threatened to “educate” on the particular topic. It helped lighten the mood. But ultimately, I think it does speak to a deeper truth that education is not a process that happens to you. You can receive your college diploma and not receive an education. To receive an education one has to be open to learning what is being made available to you. Education is an attitude. If you know everything, you can gain nothing. So basically, and in jest, I was telling my interlocutor that he would have to see me as ignorant because I was not open to his position. Education is similar to therapy, it is almost impossible to force those two things on people and get positive results.

You’re only as deep as the hole inside you.

I have a friend who changes the subject any time something “deep” comes up. Usually, he’ll say, “Wow, that’s deep…” then he brings us back to sports. It is hard to know what makes a person a “deep” person. Some people say that you become deep if you have gone through a lot of painful experiences. Others believe that deepness can be a result of near-death event. Occasionally, I’ve heard some people say that drugs have helped them see deeper meaning. And maybe the pain-filled people who turn to drugs for comfort are in a particular position where they can both see deeply and also risk drowning. A number of our great artists have suffered much, drank much poison, and seen farther than most of us will.

There are probably healthy ways to become a deep person; I imagine reading, art, and travel can help. The one common denominator from all of those just might be reflecting on the moments in your life. Reflection is a part of making meaning. It takes time to sort out the fragments of emotional experience. That’s what a good friend or a good therapist helps us to do. So, if you find someone who you can share your “deep” thoughts with, try to keep them around—thoughtful friends are hard to find.

Isn’t it ironic that so much effort is put forth to make something look so effortless.

All of us probably have been in a museum where we have seen a piece of art and thought to ourselves “I could do that.” There are a number of reasons why this is truly an underestimation of the effort that goes in to the piece. First, it is true that we might be able to COPY the art. However, most attempts to copy some how lose the spontaneous qualities that free movements have. Anyone who has tried to forge his or her mother’s signature finds this out. Second, while one might reproduce a piece of art, it is unlikely that one could have imagined that piece of art in the first place. Finally, because the viewer has already devalued this piece of art, it is unlikely that one would have taken the time to make the art, and certainly this viewer would not have had the courage to place that piece of art in front of a juror because one would fear that the juror would think that anybody could do it!

In psychology, therapists who use non-directive techniques are sometimes accused by other psychologies of “not doing anything.” However, this unfounded criticism does not appreciate the discipline that therapist needs to commit to providing a space for the client to find herself. The therapist gives her presence rather than some form of life instructions. There must be moments when the therapist would much rather just give advice.