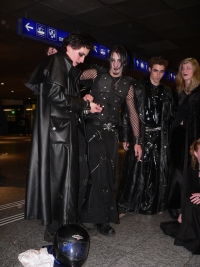 I used to hang around Goth clubs. I would paint my face white, wear a frilly shirt, the whole Goth bit. At this time, even though I was a young man, the people in the clubs were mostly younger than me, and the scene was transitioning from Vampire Goths (people who dressed with imagined old-world elegance) to Indy Goth (people who still liked to look dead but were more “industrial,” favoring steel-toed boots to high heels.

I’ve always felt most at home among the people who don’t fit in: gamers, Star-Trek conventioneers, Goths, existentialists. With my outsider status, I find outsiders most accepting. We share a point of view.

Goths in my day were a special subculture of people who were unhappy, alienated, and embracing that alienation. The garb reflects both mortality themes and alienation, whether indy or vamp. Sexual politics is often overt. A lot of Goth kids experiment with bondage and discipline. And in any club you will find drugs.

Life is not all sunshine and daisies. Goths are people who embrace the darker side of living. They dwell in the pain, wear it on the outside.

Watters (2010) suggests that prior to U.S. importation of depression, Japan once considered sadness to be a spiritual pursuit. The holiest people are the sad ones. I can appreciate such a point of view. Life is temporary, everyone you know and love must pass out of existence, and you can never be as good as you want to be. You can’t save anyone. You can’t keep your kids from skinning their knees, breaking their hearts, mourning you then eventually dying in their own turn.

This sadness is what the first Existentialists, such as Sartre, would call angst. It is that feeling of responsibility, knowing we share a common humanity, knowing all these facts, and needing to take some sort of action when none is really possible. This is the sadness of the spirit that only some people will ever feel. Most deny it, turn away from it, try to live in the light. Life is short, so eat, drink and be merry.

It would be difficult and inappropriate to hold out Goth kids as an exemplar of facing death courageously. Drug abuse, sexual issues, suicide, and parasuicide, all go hand in hand with the lifestyle. Perhaps we have an illustration of how difficult it is to live full time in the sight of death, full time confronting the pain of living. It is not possible to do this all day, every day. Yalom suggests this line of reasoning in Staring at the Sun (2009). Sex, drugs, and rock and roll become escapes because denial is for some reason not possible.

In addition to black hair and perfume that smells like burning leaves, I am a fan of underdogs and of heroic engagement. Here we have a subculture committed to engagement with poignant feelings to the extent that people wind up harming themselves. That’s heroic in a tragic way.

But we shouldn’t downplay the tragedy. Engagement with our feelings of discord, sadness, rage, need to be balanced with engagement with life, light, love, work.

Yalom, I. (2008/9). Staring at the sun: Overcoming the terror of death. San Francisco, California: Jossey Bass.