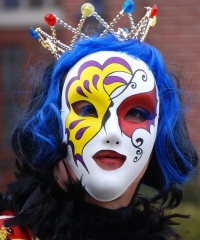 I recently watched an old favorite movie of mine, The Man in the Iron Mask. This film came out in 1998 and is a fictional account of some well-loved characters, the Three Musketeers. The storyline is that the King of France, Louis XIV, is a bad king, more concerned with bedding mistresses than with the welfare of his people. The Three Musketeers, after a series of unfortunate events, decide to band together and replace the king. In their plan, the king is to be replaced with his twin brother who has been locked in a prison for six years, wearing an iron mask so as to conceal his identity. After rescuing Philippe—the Man in the Iron Mask—the Three Musketeers retire to a quiet country home to prepare Philippe for the new job of replacing King Louis. His first night out of the mask, Philippe is standing at an open window looking out at the moon and one Musketeer, Athos, looks up and is surprised to see Philippe has put the iron mask back on. When Athos enters his room, Philippe explains, “I’ve been wearing the mask so long, I don’t feel safe without it.”

That statement struck a chord with me on many levels. As a psychotherapist, I have the privilege of working with people in their deepest pain and bearing witness to their suffering. Many times, I can see them in ways they can’t yet see themselves; I see beyond the suffering, beneath the lifetime of lies, past the pain, and glimpse the greatness within. Often times, it is tempting to pull off the mask the client is wearing in an attempt to show them who they really are. It is tempting to force my own agenda of “helping” the client.

In this movie, the Three Musketeers had good intentions for their plan to save France but they didn’t stop to consider the implications for Philippe. His mask, in so many ways a nightmarish prison, had been welded to his head for so long that he had started forgetting who he was without it. Philippe had begun to identify himself with his mask and to have it ripped off abruptly was too much for him to stand initially. Philippe is like many psychotherapy clients: they come in with low self-esteem, extreme anger, obesity, self-loathing, and many other “masks” that have become a part of their identity. When well-meaning therapists rip the masks off suddenly to “help,” the client often feels lost…the world is not yet safe without the mask keeping the distance between them and authentic encounter with others.

In one of the final scenes of the movie, after Philippe has been captured and sent back into prison and wearing the Iron Mask, he is again rescued by the Three Musketeers. Athos says to Philippe “Oh good, you’re ok…I was worried that the mask would have destroyed you,” and Philippe responds “I wear the mask, the mask doesn’t wear me”. Philippe, in his encounters with the Three Musketeers, has begun to learn some things about himself including his royal bloodline. He recognized that he was kind, compassionate, courageous, funny, and capable of loving others in a way he never knew. His time with his new friends showed him who he really was, despite the years he had spent in the mask, wrestling with his identity. In time, he was able to again separate himself and his identity from the mask. He now knew he was safe, secure, and could face the world and the challenges that presented. In contrast to his earlier statement where he stated he didn’t feel safe without the mask, he was now able to engage in living without the mask being a dominant part of his self-image.

Again, I am reminded of the client who enters psychotherapy having overly identified with their ways of showing up in the world. The client has not yet understood that whatever mask they wear is not the sum total of their identity. Through therapy, the client begins to know that they are more than the masks, and, like Philippe, begin to separate their identity from the masks they have worn.