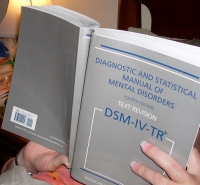 On December 1, without much fanfare, the Board of the American Psychiatric Association approved the draft of the DSM-5. Even as of today, more than a week later, very few news outlets have covered this major story. It seems as though the American Psychiatric Association would rather keep things quiet rather than promote their new book. I suppose they are aware that calling attention to this very flawed draft of the DSM would call even more public attention to its weaknesses. Those in the blogosphere who have responded so far have been primarily negative in their reactions.

I have been anticipating this moment since I first became involved with the Open Letter to DSM-5 petition, which was launched in October 2011. At that time, David Elkins was President of the Society for Humanistic Psychology (Division 32 of the American Psychological Association, and we were both very impressed by a critical letter to the DSM-5, which had been drafted and posted online by the British Psychological Society. We decided to write our own letter, and Sarah Kamens’ expertise in this area proved to be indispensable. When the letter was complete, it was approved by the Board of the Society for Humanistic Psychology and was posted online. We were astounded by the level of interest in the letter, and within a few months, we had amassed over 14,000 signatures of mostly mental health professionals. More than 50 different mental health organizations endorsed the petition. Donna Rockwell, Frank Farley, and Jonathan Raskin joined the effort, and took the campaign to another level, including increasing attention from the press.

The Open Letter campaign was very successful because it launched a steady wave of media attention, which focused on flaw after flaw in the DSM-5 drafts. For the past year, the DSM-5 received an almost relentless and constant barrage of negative media attention, which certainly had an impact both on public perception of the text and also the Task Force.

I believe the success of this campaign was due to several factors. First, the Open Letter Committee always made it a priority not to attack the character of the leaders of the DSM-5 Task Force. We assumed, in good faith, that the leaders of the DSM-5 were operating to the best of their ability to achieve a benevolent outcome. We could not expect the public, or the DSM-5 Task Force, to take us seriously if we did not demonstrate that we were operating in good faith to create what we hoped would be a fruitful discussion that would ultimately improve the DSM-5 for everyone. Criticisms, therefore, were always directed at the DSM-5 proposals, not at the persons developing the draft. Secondly, while many identified humanistic and existential psychologists often question the fundamental assumptions of DSM diagnosis, we did not attempt to mount criticisms that were completely alien to the DSM framework of diagnosis. We felt that a successful critique of the DSM-5 would have to be done on the American Psychiatric Association’s own terms. The DSM-5 proposed to be a better, more reliable, and valid scientific instrument. We restricted our criticism to what we perceived to be gross shortcomings in the claim to scientific reliability and validity. This approach to criticism permitted us to garner the very wide support we received for the petition. The evidence is overwhelmingly on the side of our argument. Even Allen Frances, the DSM-IV chair, has endorsed our criticisms.

While the DSM-5 Task Force found their document the target of much negative press, the Open Letter Committee gave the American Psychiatric Association a very easy “out.” All they had to do was agree to submit the DSM-5 proposal to an outside organization for review. It is customary for scientists to submit their work to outside, impartial peers for review of their work prior to publication. It would not have been prohibitive for the DSM-5 Task Force to do the same.
Sadly, however, the DSM-5 Task Force refused to submit the proposal to an unaffiliated organization for an independent review. The American Psychiatric Association replied to tell us, “There is in fact no outside organization that has the capacity to replicate the range of expertise that DSM-5 has assembled over the past decade to review diagnostic criteria for mental disorders.” I hope the arrogance of this remark is so self-evident that it requires no further exposition. But just in case: of course, there are hundreds of organizations of mental health professionals across the world that would gladly offer their services to review the DSM-5. To claim that the American Psychiatric Association is the only organization capable of identifying the DSM-5’s reliability and validity is ludicrous.

While we can never know the true motive of the Task Force, it appears evident to me that there is only one reason why a group of scientists would refuse to submit their work for independent review: they must of course be aware of how poor of a product the DSM-5 has turned out to be. To have an outside organization publically explicate all of the flaws would be a public relations disaster.

However, I suggest an independent review would provide a better, safer document that would better serve the public rather than the self-interest of the American Psychiatric Association. The failure to follow through with an independent review is, I am sorry to say, the end of the promise of good faith from the American Psychiatric Association. Genuine dialogue is impossible with an organization that thinks it knows everything and believes it can’t learn anything from any other organization or profession than its own.

The individuals and organizations that endorsed the Open Letter to DSM-5 can be very proud that we took the high road, and carefully and thoroughly warned the Task Force about ways they could avoid putting forth a deeply flawed diagnostic manual. We publically engaged in a good faith effort to persuade the American Psychiatric Association, for its own best interest and on its own terms, that it should turn back from serious mistakes before it is too late. The DSM-5, for its own reasons, has chosen to go forward with a manual that, frankly, has failed to address most of the major concerns raised in the Open Letter.

While we have reached the end of our good faith effort to communicate our concerns to the DSM-5 Task Force, we are only at the beginning of a larger effort to improve and humanize mental health diagnosis. In the coming months, you will witness the Society for Humanistic Psychology engaged in a number of different responses to the DSM-5.

Frank Farley and Jonathan Raskin are serving as co-chairs of the Diagnostic Summit Task Force of the Society for Humanistic Psychology. This committee currently consists of Erinn Crosby, Sarah Kamens, Krishna Kumar, Brent Robbins, Donna Rockwell, Sarah Kamens, and Krishna Kumar. As Farley explained in his own blog post, the aim of this Task Force is to plan an online forum (and possibly, in the near future, an in-person meeting or summit) to discuss alternatives to the DSM-5. The idea is to “reboot” the whole concept of diagnosis, and begin to think creatively and internationally from the ground up.

As President-Elect of the Society for Humanistic Psychology, I am working closely with current President Louis Hoffman to discuss how to respond directly to the DSM-5 publication. A new and additional Task Force will be charged with exploring how best to react to the DSM-5’s failure to resolve the problems identified in the Open Letter. Possible options include simply accepting the DSM-5 document (unlikely), calling for a moratorium on the DSM until problems are resolved, declaring a boycott of the DSM-5, or taking other potential avenues to respond to the American Psychiatric Association. We have not yet decided the best course of action at this point. We will certainly do our best to gather together and partner with organizations with the best expertise to continue serving as independent critical reviewers of the DSM-5. Your feedback however is appreciated. And I hope you will let us know what you think by sharing your thoughts in the comments below.

In the meantime, I recommend taking comfort in the fact that, as a clinician, you have the option of avoiding use of the DSM-5. Insurance companies, by law, use the ICD codes for diagnostic purposes. It is possible to bypass the DSM-5 altogether and, instead, go directly to the ICD, as has been suggested already by the APA Monitor.