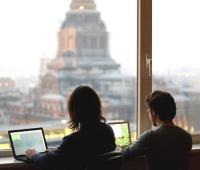 We closed the Dallas Region office of my consulting firm in 2002. When I boxed up my stuff, it marked the end of 14 years of reporting to work in an office building. Since then, when I’m not travelling, I work from home. Until this week, I hadn’t given much thought to “office work.” I just returned from a trip to London where I worked with leaders of the global property operations function of a technology and financial services company. I not only learned about the role of a facility manager, I also got an unexpected peek into the workplace of the future.

My client has over 2,000 sites across the globe and the group I worked with is responsible for various aspects of selecting, moving in, managing, and moving out of facilities as the company reacts to market trends, acquires and divests of other companies, and generally works to make efficient use of their real estate. The client team introduced me to a concept called “agile working.” Unilever Corporation provides an explanation of agile working with a video tour of their Singapore office. The basic idea behind agile working is that the constraints of the office space do not dictate how, where, and when people work. Rather, the facility becomes a tool to be used by employees in the same way they might use a computer or a phone.

Despite all the benefits of agile working touted by the video, one casualty of all the shared space is the concept of “my office” or even “my cubicle.” The people at my client’s London office arrive, find an open spot, and get to work. Even the private offices of executives become available meeting room space when the executive is not in the office. I pretended not to find it creepy that the workspaces have motion detectors that track data on how often the space is occupied. The system creates reports that can provide a facilities manager with information about a site’s efficiency. One of the district managers told me about how much money can be saved by closing down an inefficient site.

Other than the badges everyone carried with the company’s logo on it, there would be very little else to signal to the casual observer which company employed all those people tucked into their workspaces. In describing an organization’s culture, Edgar Schein characterized “artifacts” as tangible manifestations of an organization’s values. In Organizational Culture and Leadership, Schein wrote that artifacts include “all the phenomena that you would see, hear, and feel when you encounter a new group with an unfamiliar culture.” On the basis of simply observing the artifacts in the London office, I’d say, above all, the company values tidiness.

I was struck more by what I didn’t see than what I did see. “Where do people hang their children’s artwork?” I asked on a tour of the facility. “What about the certificates of completion they receive at the end of a training course? What about the ten-year congratulatory paperweight?” I persisted. “Oh, we have a clear desk policy here,” my tour guide explained. I suppose there’s no need to provide a physical space for stuff when all the stuff is digital. They did have a room with lockers where people could store purses, backpacks, and such.

What are the implications, I wondered, of not having a designated space that marks one’s personal territory? Do the employees I observed in London feel less of a sense of belonging to their company because their names don’t appear on a door or cubicle wall? Everyone I spoke to seemed happy with the arrangement. Many described the freedom and productivity that accompanied an anywhere, anytime, agile work environment.

In some sense, we’re always just borrowing the physical space we occupy. Even though human territoriality has deep biological roots, perhaps the territories defined by the screens on the devices we carry around suffice to meet our need for demarcating what’s mine and what’s not mine. When organizations were synonymous with imposing physical structures, it was easier to recognize workplace dynamics. In a dispersed, decentralized, agile workplace, the boundary conditions that define the system of work are difficult to delineate. In an agile work environment, what does it even mean to say, “I’m going to work?”