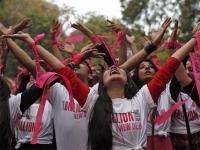 As a woman who is a survivor of violence and as a human rights advocate who focuses on women’s and children’s rights, I took part last week in the V-Day One Billion Rising campaign, which aims to create a space of celebration while questioning the culture of violence and other retrogressive cultural practices that violate women and girls, such as female genital mutilation.

With very keen interest, I participated in the One Billion Rising campaign at the Central Park in Nairobi, Kenya. It was great to see children, women and men of all ages and races, creeds, colors, religions and ethnic backgrounds gather in solidarity to celebrate love for humanity and call for an end to violence against women at the event, which was held on Valentine’s Day.

A global activist movement, V-Day aims to end violence against women and girls, and acts as a catalyst promoting creative events to increase awareness, raise money, and revitalize the spirit of existing anti-violence organizations. V-Day’s purpose, according to the movement’s website, is to draw broad-scale attention to the fight to stop violence against females—women and girls alike—including rape, battery, incest, female genital mutilation, and sex slavery. This year’s One Billion Rising campaign was hosted at colleges and communities worldwide and marked the movement’s 15th year addressing this cause.

The campaign “has brought together coalitions of groups and individuals that have never worked together before; brought in all kinds of new people and groups and associations and masses of men who are not aware of the issue but are now working on it; brought violence against women, through our numbers and efforts to the center of the discussion,” V-Day Founder and award winning playwright Eve Ensler said in a press release. “We are rising together because it is in our connectedness, in our stomping feet and uncontrollable hips that the path and energy will be created to bring in a new world. We will galvanize the will and the passion of everyone rising around the world to create change.”

In Nairobi, Arboretum Park-based DebeDebe drum circles and others graced the One Billion Rising campaign event with inspiring rhythms that were uplifting and evoked a deep energy vibration that enabled some of us to appreciate their percussionist artistry and mastery—a moment of spirited rhythmic solidarity with others around the world. It was very much aligned with Ensler’s urging: “Let’s rise and dance and change the world!”

“Dancing insists we take up space, and though it has no set direction, we go there together,” Ensler said. “Dance is dangerous, joyous, sexual, holy, disruptive, and contagious and it breaks the rules. It can happen anywhere, at anytime, with anyone and everyone, and it’s free. Dance joins us and pushes us to go further and that is why it’s at the center of One Billion Rising.”

Kenyan musician, Eric Wainaina’s beautiful soulful melodies, “Mwananchi Mzalendo” and “Revolution Time,” so powerfully brought the moment home as Esther Passaris, an aspirant for the Nairobi women’s representative position in the upcoming general election in Kenya, pledged to address domestic violence issues with special attention to end violence against women and children. All of the dancers, roller skaters, Korogocho Grannies karate team as well as other groups that demonstrated self-defense techniques were entertaining and informational. Most powerful were the short stories and reasons shared by various participants for participating in the One Billion Rising event.

It was delightful to see the power of social media at work as participants in the campaign around the world were able to share moments in real time. The V-Day Facebook page was filled with images and videos taken all over the world showing how women, men, and children were “rising” creatively calling for an end to violence against women. I enjoyed viewing the pictures, images, and videos of creative dances that included flash mob dances in Singapore, Khartoum, Russia, Hong Kong, Melbourne, New Zealand, the Democratic Republic of Congo, New Delhi, Mogadishu, Ireland, Germany, Israel, Hawaii, Atlanta, New York, France, the Philippines and many other places.

Among the messages shared from event participants worldwide were:

The One Billion Rising campaign’s call to end violence against women leveraged the energy and power of love for humanity and our interconnectedness through song, dance, spoken word and other mediums, bringing awareness to the urgent need to this worthy cause in a creative manner. With a red-and-black color scheme, the global campaign celebrated diverse rhythmic styles and genres, which included an anthem written by Tena Clark and Tim Heintz called “Break the Chain.” According to a V-Day press release, the anthem has been translated into several languages, including Spanish, Farsi, and Hindu, and a dance that was choreographed by renowned choreographer Debbie Allen.

Before the global event kicked off, Ensler said she believed that the One Billion Rising campaign has the power to change the world because “it has already created an energetic wind or wave igniting existing efforts to end violence against women and create new ones.”

Let us rise against all forms of violence. Peace and love!