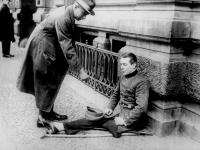 A friend tells the story of a young man and woman who have fallen deeply in love. Several times a day they send each other emails and text messages, and in the evenings they spend hours on the phone sharing with one another their deep, abiding, and undying love for one another. Over and over again, they reassure each another they will always be there for one another, and that they would do anything for the other. The conversations are intense, and the writing poetic.

One night the young man calls his girlfriend and shares with her how bad his day has been, how he is struggling his with finances, as well as managing a schedule of classes and a job. Finally, in a desperate tone, he pleadingly asks the young lady if she would come over and comfort him. After a long silence she says, “I would do anything for you, honey, but I just washed my hair.”

We are a culture that writhes with “wet hair syndrome.” Our language is riddled with references, promises, and exclamations of caring for others, supporting people in need, and providing whatever resources are necessary. Our words are passionate and graceful. But if a non-profit organization needs to raise money, they must offer donors a gift or host a grand ball filled with tuxedos, champagne, and celebrities in order to receive a donation. In order to recruit volunteers to assist in community projects or help with the homeless, it must first be proven there is indeed a ‘real’ need before a commitment is given.

The care for each other unto death and the willingness to die in service to others bonds a combat unit in ways that are rare in civilian life. During the Iraq War, civilians were shielded from images of coffins returning home and were advised to shop, rather than make personal sacrifices to support the troops. The narcissism, personal ambitions, and self-obsessions with consumerism and celebrity culture have prompted some veterans to ask, “I fought for this?”

Today, segments of the Christian church consider themselves persecuted because of changing cultural views of abortion, marriage equality, and the broadening spectrum of spiritual belief systems. Gun owners claim their constitutional rights are being violated because of proposed guidelines and laws concerning gun ownership. Caucasians believe they are being stripped of their societal standing because of increasing population among Hispanics, Asians, and Blacks. Our definitions of suffering and sacrifice are now based on our perception of being inconvenienced or discomforted.

Several years ago, I took a small group of high school youths to a national youth gathering of 18,000+ participants. At one of the keynote sessions, the reigning Miss America spoke on persevering through the ups and downs of life. Speaking on disappointment, she shared her greatest disappointment was not being selected to the cheerleading squad of her high school. The crowd of young people erupted into a chorus of boos. In my small group alone was one young person struggling with an eating disorder. Another was dealing with the recent separation of his parents. Yet another individual in the group had learned just days before leaving on this trip that her mother was dying from cancer. They found it hard to be sympathetic toward this beautiful, well-situated young lady and her failure to make the cheer squad.

Every major spiritual belief system holds to the necessity of suffering and sacrifice as key to living a full life. Existential psychology maintains that suffering is a necessary part of life. Religious practices and existential psychology share the belief that embracing the suffering and sacrifice of life are the only real way of coping with pain and finding that place of peace and contentment.

Shortly before his death in 1990, Stevie Ray Vaughan released the song “Caught in the Crossfire.” The last verse of the song has these words:

This “right to be happy” frequently demonstrates itself as an attitude of “if I ain’t happy, ain’t nobody going to be happy.” As a society, we have indeed lost sight of the golden rule and treating people as we would wish to be treated. Our culture is increasingly becoming one where one must prove “true need” before assistance is offered. We are suspicious of any person or group that relies on a “hand out.” We are no longer willing to sacrifice any part of our status in an effort to assist another who is suffering.

Sacrifice and suffering are a necessary and important element of life. For our neighborhoods, communities, and country to survive the economic, social, and spiritual crossfire in which we find ourselves, it is imperative we re-learn the essential role and need to sacrifice for the good and well-being of others. We need to re-learn that suffering is what motivates us to grow and in turn enables us to know contentment or stated in another way . . . happiness—whether we have just washed our hair or not.