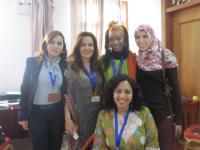 In his March 11th 2013 article “Female candidates faced big obstacles in concluded polls” in the Standard Digital, Michael Wesonga asserted that “Kenyan women stand out as the greatest losers in the just concluded General Election after they failed to clinch top seats. No woman was elected as governor or to the Senate”. He further observed that “they were relegated to county women representatives and few MP slots, as the more appealing governor and senate positions remained a preserve of their male counterparts. Women lost as voter dynamics in all the elective positions tilted towards men despite gender empowerment gains enshrined in the new Constitution”.

While Wesonga is entitled to his views and observations on the outcome of the recent General Election in Kenya, I disagree with him that “Kenyan women stand out as the greatest losers in the just concluded General Election” and here is why. While I cannot deny that the numbers reflected in Wesongas’s article show that women aspirants did not garner as many elective seats as compared to their male counterparts, saying that Kenyan women were the greatest losers is in my view an illusion.

I would perhaps more accurately state that the nation of Kenya was the greatest loser in the recent General Election for as affirmed during last year’s Fourth Regional Conference of African Women in Political Leadership in Lilongwe, Malawi, “democracy without women’s equal participation is flawed.” Research also shows that the status of women (which includes the number of women in elected leadership positions) is a better indicator of a nation’s quality of life and well being than its Gross Domestic Product (GDP).

The numbers behind Wesonga’s argument communicate something greater than the fact that women candidates did not garner as many elective seats as the men. These numbers are a statement made by the Kenyan people about their position on women and leadership. It is a strong message from perhaps the majority of the Kenyan people that they are not ready to elect women into positions of leadership. Deciphering this complexity calls for more than seemingly sweeping and simplistic statements that blame Kenyan women for this outcome.

A closer look at the underlying message communicated by Kenyans from the March 2013 elections could not be very far away from confirming that Kenya is a nation that continues to secure and perhaps reinforce its position as one of the most patriarchal societies in the world. Not only did women lose but most importantly the entire nation of Kenya lost a chance at enabling a more humane and equitable society. While the new constitution of Kenya provides for county women representative positions with representation across all 47 counties, it is clear that Kenyans freely willed and demonstrated through their vote that they are not ready to accept more women in the political leadership realm.

Moi University’s Masibo Lumala assertion in Wesonga’s article that “Women simply lack interest in their own and matters concerning them and would vote for male aspirants instead,” is not entirely true and perpetuates the thinking, values, beliefs, attitudes and stereotypes that continue to blame women for not being elected into positions of leadership. There is more to this than just “women simply lacking interest in their own and matters that concern them”.

For example, we cannot ignore the tyranny of the social construction that Kenya is immersed in where prevailing value systems, beliefs and attitudes embody the system of patriarchy that dictates that leadership is a man’s territory. Therefore, little wonder that women in patriarchal societies like Kenya that venture into “men’s” territory of leadership by vying for elective political leadership positions are often shunned, ignored, rejected, ridiculed or violated.

Based on some conversations I have had with people in various forums including social media, it is clear that some condemn the introduction of “affirmative action” as a strategy to create space for more women to participate in leadership and decision making. Lumala shares this position claiming that “… the provision for women representative was discriminatory in itself, implying that women were unable to muster political competition with men”. As Wesonga reports, Lumala further noted that “Affirmative action was a very wrong start as it discriminated against men by out rightly dishing out of positions to women creating a sense of rebelliousness among men”.

I disagree with Lumala and others that share the position that “the provision for women representatives” a form of affirmative action was “wrong” and “discriminatory”. As I have shared with some friends, affirmative action is necessary since women continue to be a marginalized group with limited voice within the political leadership and decision making landscape in Kenya. During a recent social media exchange, Thuku Wa Njuguna, Chairman of “Men for Gender Equality Now” concurs with this thinking noting that “At our stage in the political transition, affirmative action is necessary”.

Lumala’s suggestion that the provision for the women representative’s positions caused a “sense of rebelliousness among men” and views from others that some people did not vote for women because women already had designated positions (women’s representative) is unfortunate. In my view taking this position seems to be a form of deliberate or unconscious political propaganda that was so effectively executed by the agents of patriarchy (both men and women) during the elections campaign period that deterred some people from voting for women. The problem here is that the electorate was not well educated to understand and appreciate why it is very important to have women’s voices represented through the county women’s representative and other positions. Such an education would have significantly countered this propaganda as the citizenry would have been better equipped with the knowledge and understanding on why the women’s representative positions are necessary and should not deter women from vying for other elective leadership positions like Member of Parliament, Senator or Governor.

Contrary to Lumala’s views, I believe that affirmative action is necessary but must go hand in hand with a thorough civic education process along with much needed cultural transformation that will help Kenyans (men and women) better appreciate women’s gifts and contributions through leadership. Kenyans must realize that this is also about power relations and women in leadership are perceived as a threat by those that want to retain the power base within men’s circles. The county women’s representative position was effectively used by some to claim that women already have leadership positions and should therefore not vie for other elective leadership positions. This turned out to be very successful political propaganda machinery that was executed by some of the agents (men and women) of patriarchy that managed to keep women out of the leadership positions.

Better civic education, individual and collective reflection and a deeper awareness of the implications of some of the gender equality provisions in the new constitution are required. A cultural conscious evolution, revolution and a critical mass of Kenyans are also needed. A critical mass that better appreciates the greater implications of including women at all levels of leadership and governance in the society.

The focus on leadership as a competition between men and women must stop as this only contributes to a loss of sight of the benefit to the collective in the form of enhanced livelihoods through equal and inclusive leadership and governance. A partnership approach is needed with the thinking that there is enough for all of us – women and men.

I am reminded of the Fourth Annual Women and Political Leadership conference that I participated in last November in Lilongwe, Malawi. The conference was organized by The African Women’s Development and Communication Network (FEMNET) in partnership with UNDP and the NGO Gender Coordination Network (NGOGCN) bringing together approximately 60 delegates from 21 countries including Botswana, Burkina Faso, Cameroon, Congo Brazzaville, Egypt, Ethiopia, Kenya, Libya, Malawi, Mali, Mauritius, Nigeria, Rwanda, Swaziland, Togo, Tunisia and Uganda.

The theme of the conference was Interrogating Gender and Elections and Envisioning Women’s Leadership Post 2015 and the “key objectives of were to discuss and address the key impediments to women’s full participation in electoral processes, and deliberate on goals for women’s participation in decision making for the post 2015 development framework”. It was interesting to witness many of the themes that emerged from this conference play out throughout the recent electoral cycle in Kenya during the pre-election, elections time and post elections phases.

As rightly pointed out by Lumala in Wesonga’s article, a lack of resources and “electing women is still a deep-seated cultural issue in the country…” are some of the factors that continue to prevent more women in Kenya from meaningfully participating in leadership. In a quest to create conditions that encourage women’s participation in leadership the African Regional Women in Political Leadership Conference’s Communiqué reports that conference participants:

A) CALLED upon African governments to lead the way by ensuring that:

1) Electoral processes are reformed with a view to leveling the playing field for women to effectively participate in all stages of the electoral cycle, including through affirmative action initiatives within the law and targeting both elective and appointive positions

3) The African Charter on Democracy, Elections and Governance, the African Union Protocol on the Rights of Women and the SADC Gender Protocol are ratified, domesticated and implemented in order to enhance the meaningful participation of women in decision making processes

B) ENCOURAGED Civil Society Organizations to remain committed to:

1) Step up the fight for reform of policies and laws that hinder equal participation of women, and advocate for comprehensive institutional transformation of electoral processes

2) Advocate for the meaningful involvement of women in electoral processes, moving away from stereotypical use of women in campaigns

5) Stand in active solidarity with African women’s struggle for equality, human rights and democracy such as in the North African states and northern Mali

C) URGED Development Partners to invest in institutions and processes that strengthen women’s political participation including through appropriate, timely and regular capacity building of women politicians

D) APPEALED to media outlets to portray a balanced and objective image of women leaders through substantive rather than sensational and scandalized reporting, and accord women leaders a fair share of media coverage

Another dimension to the women and leadership conversation calls for the understanding and appreciation that every Kenyan woman or man has a constitutional right to run for public office and should be protected by the law. So the thinking that women should not be leaders should be further interrogated particularly within a cultural context and space created for equal and more inclusive leadership and governance that Kenya so badly needs in order to move on to the next level of prosperity that upholding our collective human dignity.