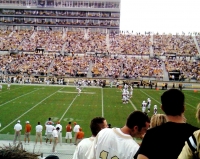 College football in Florida. Photo by Will Bostwick.

A huge controversy has recently arisen surrounding the Steubenville Rape trial—is the reporting biased? Are they being overly sensitive to the accused rapists and neglecting the victim? In reality, we are humans—we react when we are triggered by situations that we see as sensitive. Both sides in the Steubenville case are in a difficult situation, and the effects of the case go far beyond working with the accused and the victims—others are affected by difficult trials and crises as well. When hearing these reports, whether biased or not, we seem to neglect our training and forget that there are humans involved on all sides, each with his or her own opinion that is set to influence others. As someone who works in sports psychology and is a humanistic psychologist—this triggers something for me, a different perspective from one that you may hear anywhere else.

When I hear about trials and athletes getting into trouble, my tendency to react goes into high drive as does anyone else’s. My first thought, however, is with both the accused and the victim. Crimes including rape, violence, along with many others (I could create an excessively long list, but that’s not the point), are not something new in sports, and let’s be honest, they are not something new in the population in general. But when there is an athlete, or multiple athletes, involved, different questions arise—are they going to get prosecuted? If they do, will they get the full extent of the penalty? Do they realize that they’ve done anything wrong? While these are all valid questions—I pose another one: how does the team deal with the crisis at hand? I am not saying this as a way to neglect the crimes or the victims—I say it as my reality.

When a team goes through a crisis situation with one of their members, be it a crime or a career-ending injury—the team reacts. Some members get angry, some get defensive, and others do not know how to react. As someone who works with these teams, a sports psychologist steps in and try to get to know the team members—to try to figure out how the team is reacting as a whole, and what the reality is for each member. Oftentimes, having a friend get hurt or get in trouble leads to a whole new level of fear for an athlete—they can begin to question their sports mortality and may begin to question their own actions, having an almost existential life flashback to times and actions they may have taken. Sitting with these athletes requires an open mind, as things may come out that may be hard to hear. As humanistic psychologists, we also must remember that we are helping a person—not an athlete, not a star, but a person—to put the pieces of their life together, to relearn what the team means to them, and what their role on that team is.

With a team, it is more a reminder of what the team is about, which may be redefining roles and learning lessons on not only what the team means, but also how the team acts. Coming from a more personal construct perspective, as I do, this can mean redefining the core constructs, or the core beliefs of the team and the members. In athletics, the center of the team can become about winning, glory, being the best, but the core constructs also need to include respect (for self and others), sportsmanship, and a willingness to be open to learn and accept responsibilities. While this is a lot of information to provide, to discuss, and to expect—it is possible, and is more plausible if fostered by the coaches, and if fostered early in life. While all those factors may not be possible, I do believe it is something to strive for, especially as a humanistic sports psychologist.

Today’s guest contributor, Trisha Nash, is a doctoral student at the University of Memphis, who is currently on internship at Utah State University. She has been involved with Division 32 for about five years and is currently working with the membership committee and the Student Ambassadors.