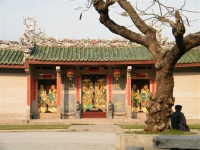 I have recently completed a six-day short trip back to my late grandfather’s village in Shantou, China. It was a trip that began in an almost touristy way: landing at the airport, checking in, and marvelling at the comforts of the hotel, having a feast of a dinner for the price of a smaller meal back home. My extended relatives, whom I have never met before in my 30 years of existence (they live in China, while I was born and bred in Singapore), welcomed us with a mutual awkwardness; almost like tour guides.

Perhaps it was the familiar foods we grew up hearing about but were getting increasingly rare in urbanized Singapore, perhaps it was the familiarity of the language spoken all around I grew up hearing my late grandfather speaking, perhaps it was the warm shoulder hug of a cousin I have only known for the past six days. To my surprise, by the time we were due to leave, this place felt kind of like home. There were no deep conversations—few of them even knew what I do for a living. There was no sharing of hearts and lives, but it felt extremely comfortable sitting in the living hall on a Monday afternoon sipping Chinese tea.

I have always thought of myself as exclusively Singaporean. I have never thought of myself in any other way. Singaporean, of Chinese descent. Where in China have I descended from? I had not even the faintest idea. In some ways, this trip to see the “old home,” or “home village,” as it is called, was a process of birth. Suddenly, in one afternoon, it all made sense. All the names of places, clan associations, village names had a physical place attached to it. More than that, they were places with which I now had a relationship. They were no longer distant fairy tales or historical artifacts. The tiny quarter of a house my grandfather lived in before he left for Singapore some 90 years ago still stands. My extended relatives still live in the house he built 30 years ago with the money he brought back after 50 years of saving up as a coolie.

Every house in the village had a door sign carved in stone signifying the family name and the part from China they first emigrated en-masse. My uncle acknowledges my late grandfather’s spiritual presence in the house by lighting incense each time he enters and exits the family home. In the village temple lies pictures of the departed who were once members of the village. There is also a plaque of Chinese poetry, where each character represents one successive generation. My generation is represented by the character for “Spring.” What a beautiful symbol of new life!

Perhaps it was significant that no one in my home village asked about my job. It didn’t matter. The Eastern construct of identity often says: “You are because they were.”

As a young Singaporean, I often find myself caught between two worlds. I am fluent in English, less so in Mandarin, and I find my thinking about people and life is often a mishmash of Western and Eastern philosophies. After six days of Chinese food here in China, I’m really craving for some good pasta. I’ve been a connoisseur of specialty coffee for a few years now, but now find myself developing an interest in the Chinese art of tea. In Sichuan, I found myself at home in McDonald’s, but in Melbourne I found myself at home in Chinatown.

Polkinghorne (1991) is of the view that identity is not fixed and static; rather, it is a flowing narrative that moves and changes as one assimilates new experiences and encounters into one’s being. His understanding of identity is certainly not limited to people of my cultural background, but is particularly comforting in my search for my identity. It has also come alive for me on this trip. My mind has been awakened to history I was not aware of, my heart opened to relatives I never knew I had.

I find that as one’s identity develops into maturity, there is greater room and space for the integration of new experiences of the self. There is more tolerance for ambiguity, more openness to what may seem at the outset to be conflictual, more space for growth and expansion, and more security to choose to retain or reject experiences relating to one’s sense of self.

Who am I? I am either from China, or I am from Singapore. Technically, I cannot be both, but experientially I am. I am from the Teochew dialect group, but that part of my identity rarely matters in Singapore except during discussions on marriage rites. I am the grandson of a coolie, not a rich businessman with a rags-to-riches story, but I choose to embrace this part of my heritage with pride.

Who am I? Before this trip, I was entirely Singaporean. Today, I am a slightly different me. I am also Chinese, I am also from Shantou. There is a part of me, not just my family or my family’s heritage, but me, which has been re-birthed.

Today’s guest contributor, Zheng Liren, is a social worker and guidance counselor in Singapore, who stumbled upon Existential Psychology after picking up an Irvin Yalom and a Viktor Frankl book in a local library and hasn’t been able to put down existential writings since then.